Extension of Prevent into schools has disproportionately affected Muslim students and had 'chilling effect' on classroom debate, rights group says 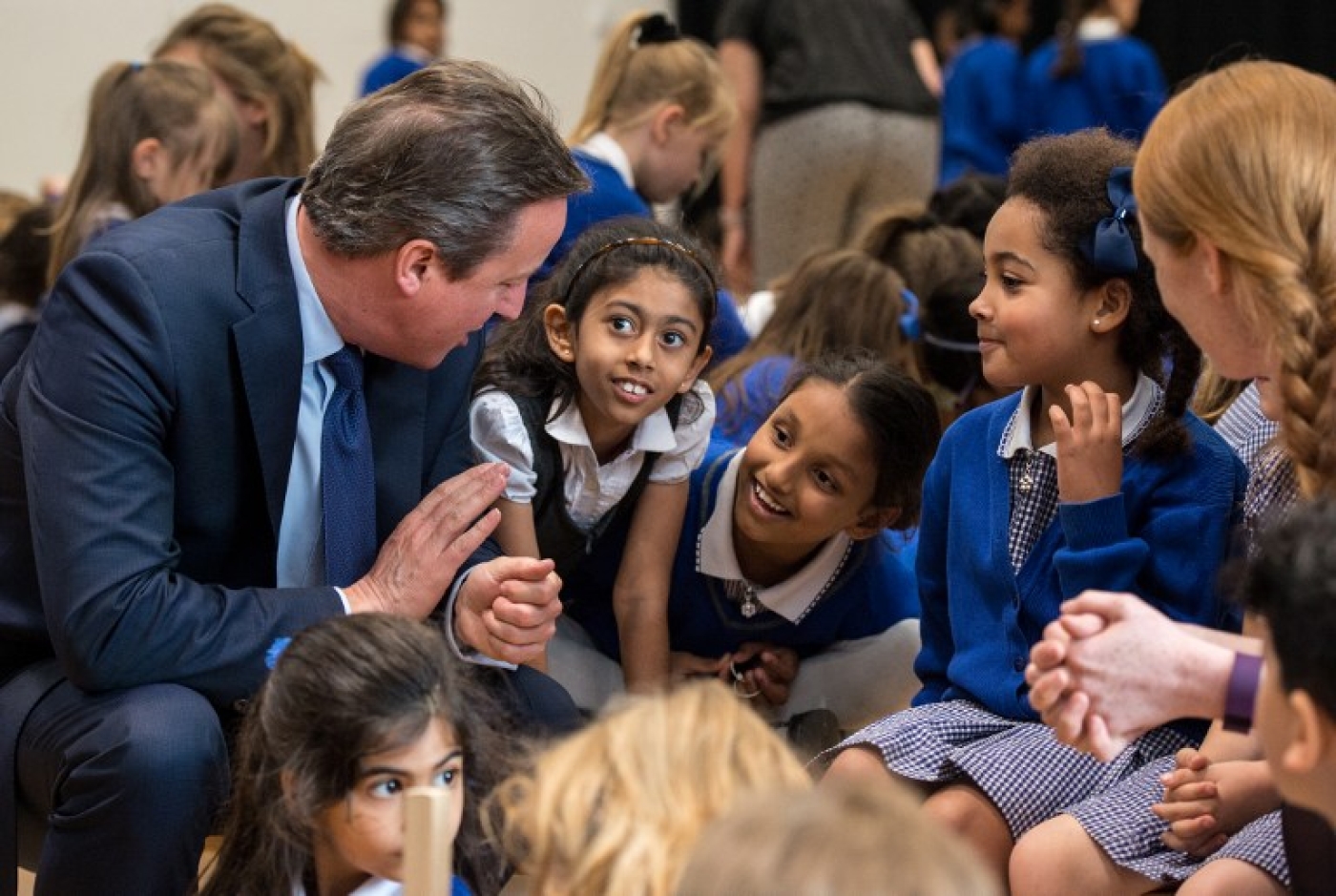 David Cameron, who is set to resign as British prime minister on Wednesday, has overseen the extension of Prevent into schools (AFP)
By
Simon Hooper

The UK government's extension of its Prevent counter-extremism strategy into schools is violating the rights of children and having a “chilling effect” on open discussion and debate in classrooms, a human rights organisation warned on Wednesday.

In a report examining the impact of Prevent in schools since its introduction as a statutory duty a year ago, Rights Watch (UK) said that the strategy had resulted in a “catalogue of serious violations” of the government's human rights obligations.

It also said that Muslim children had been disproportionately affected by Prevent and that many were engaging in self-censorship out of fear of being reported for expressing their political and religious views.

In some cases, information and data regarding children was also being collected, stored and accessed without any statutory framework, raising serious data collection and privacy concerns, the report warned.

Yasmine Ahmed, the director of Rights Watch (UK), said that researchers had uncovered several instances in which children had been referred to Prevent “for legitimately exercising their right to freedom of expression in situations where they pose no threat to society whatsoever”.

“This is having a chilling effect on free speech among Muslim children in the United Kingdom and a very serious and detrimental impact on their right to education,” said Ahmed.

"Children should be encouraged to learn and grow, to express their views and have them challenged, and to value the fundamental rights that allow them to do so. A strategy that undermines these rights and alienates vulnerable children is counter-productive and inconsistent with the very ‘British values’ that the government is supposedly promoting. It is time for the Prevent strategy to be abolished.”

Since last July, the Prevent duty has placed a legal obligation on teachers and other public sector workers to have “due regard to the need to prevent people from being drawn into terrorism,” leading to a surge in referrals from schools to the government's Prevent-linked Channel counter-radicalisation programme.

The Guardian newspaper reported on Tuesday that the number of Channel referrals had tripled to about 4,000 in 2015 compared to 2014, with about a third of those coming from schools, citing figures obtained from the National Police Chiefs Council.

But critics complain that the surge has also led to an increase in inappropriate and mistaken referrals with damaging consequences for children and families involved.

Trust in Prevent has also been undermined by instances of children being reported in seemingly bizarre circumstances, and by indications that teachers were being encouraged to monitor students with pro-Palestinian views.

Earlier this year, a four-year-old was reported by nursery staff after drawing a picture they thought he said showed his father making a "cooker bomb," but which in fact showed him cutting up a cucumber.

In one case study highlighted by the report, a nine-year-old boy was referred to social services in London and questioned about the Islamic State (IS) group after wearing an Abu Bakr al-Siddique t-shirt to school. Al-Siddique is popularly considered to be one of the first converts to Islam and is revered by Sunni Muslims.

The boy, whose parents were not in the room during the interview, was also asked about his religious beliefs, including whether Muslims or Christians go to hell after they die, and a supposed “secret job” he had talked about his father doing. The “secret job,” the boy subsequently explained, was selling nail polish on eBay.

His mother told researchers that social services staff had contacted her to discuss “deradicalisation” and on subsequent visits to the family home noted that her three children had been exposed to an unusual amount of religious instruction because they went to Islamic classes after school and had been taught to read the Quran by their grandmother.

She also said her son had been reluctant to return to school after the incident and had suffered stress-related health problems.

The Rights Watch report is the latest blow to the credibility of Prevent and the government's counter-extremism policies, which have already been criticised by United Nations and European human rights watchdogs, and face mounting domestic opposition.

Last month, Lucy Allan, a backbench member of parliament for the governing Conservative Party tabled a parliamentary bill calling for a change to the law requiring primary school teachers and nursery staff to monitor young children for signs of radicalisation.

“People working with young children have been put in the hard position of having to judge whether a child’s actions constitute potential radicalisation or extremism,” she said.

“Children’s spellings, drawings, or sayings are often influenced by a variety of sources; placing a duty on staff to consider whether these constitute potential extremism damages the relationship between teacher and child. A teacher or carer should not be policing the children in their care.”

The report also echoes wider concerns about the disproportionate impact of counter-extremism policies on Muslim communities.

A study published this week in the Ethnic and Racial Studies journal highlighted growing distrust of both Prevent and the police among Muslim parents in Birmingham, with some telling researchers that they would not report their children missing if they believed they had gone to Syria.

Parents of foreign “terrorist” fighters in #Syria – will they report their young? https://t.co/dwyQMt3dii Newly published @ERSjournal

“The data from the research study has found that Muslim community members are increasingly finding the partnership with the police service problematic,” said Imran Awan, the study's co-author and an associate professor of criminology at Birmingham City University.

“The parents we spoke to were worried about the lack of support for Muslim families and they feared that anyone who had gone to Syria would be arrested and have their citizenship removed if they spoke out.”

But with the government last month unveiling a new counter-extremism bill, schools and other educational institutions are coming under mounting pressure to comply with the Prevent duty.

In a report on the implementation of Prevent in further education settings published on Tuesday, Ofsted, the schools inspection body, urged providers to “embrace the Prevent duty and ensure robust application to keep learners safe”.

How well are further education and skills providers implementing the #Preventduty? You can read the report here: https://t.co/khUZ9CxihO

Proposed measures included real-time monitoring of students' computer use and the blocking of 3G and 4G data on students' personal devices while on school or college premises; the monitoring of faith rooms; and consultations with the police and Prevent coordinators regarding external speakers.

In a case study cited in the Ofsted report as a successful example of staff identifying signs of radicalisation and making a referral to Channel, staff kept a “watchful eye” on a student whose parents were concerned that he had “shunned his Christian faith” and found a copy of the Quran in his bedroom.

The student had also posted an inappropriate comment on his college's social media site and had a new group of friends who his parents felt were having a negative influence on him.

In a post about this story on Twitter, William Baldet, a Prevent coordinator in Leicester, described the case study as a "confirmed case of radicalisation". In a separate post, he also summarised the criteria that had led to the student's referral to Channel.

But Bill Bolloten of the Education Not Surveillance campaign network told Middle East Eye that Ofsted recommendations could lead to more inappropriate referrals.

“One of the impacts of this report is that it will just make settings more fearful of inspection, so they will just ramp up a lot of these activities that will look good on paper. It is a sledgehammer approach that could create further resentment.”

A government spokesperson said that since 2011 more than 400,000 people, including teachers, had been trained to recognise signs of radicalisation.

“Schools should provide a safe space for debate and be places where young people can discuss any issue and develop the knowledge to see extremist ideologies for what they are and challenge them. The Prevent duty is about safeguarding children from extremist ideologies, not about shutting down debate – to suggest otherwise is just wrong.”