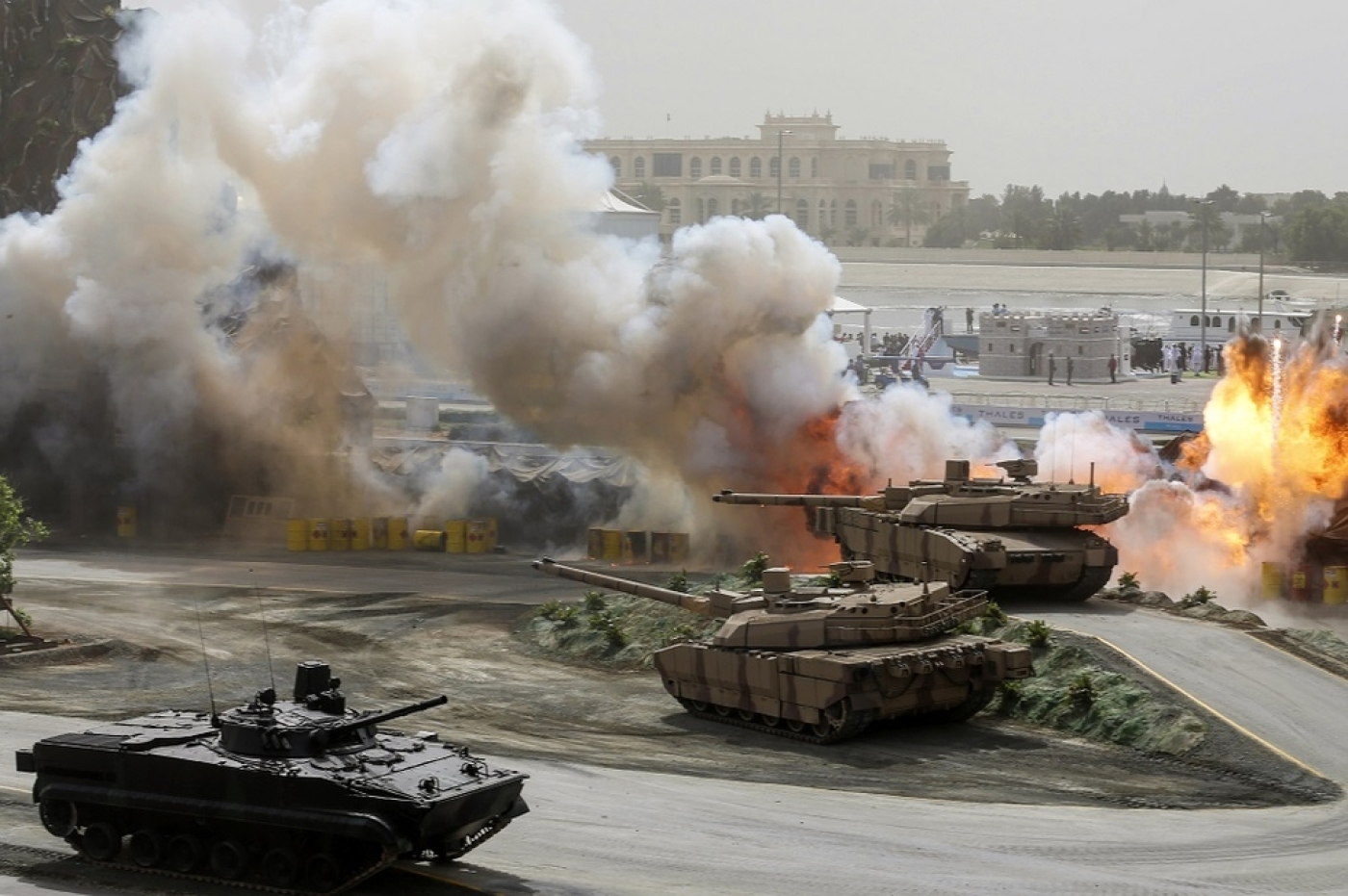 Major British weapons manufacturers linked to alleged war crimes in Yemen have been touting their products at the Middle East’s biggest arms show in the United Arab Emirates, to the dismay of opposition politicians and human rights campaigners.

The presence of sales representatives from BAE Systems, Raytheon and MBDA at International Defence Exhibition and Conference (IDEX 2017) in Abu Dhabi this week has prompted outrage, coming just weeks after the High Court in London heard calls for a halt to arms sales to Saudi Arabia over alleged human rights violations in Yemen by the kingdom and its allies, which include the UAE.

IDEX 2017, which concluded on Thursday, is organised in association with the UAE armed forces and held under the patronage of Sheikh Khalifa Bin Zayed al-Nahyan, the country's president.

According to promotional materials, the official delegations represented more than 150 countries and included a UK pavilion organised by ADS, the trade body for the arms industry in Britain. It was also attended by the DIT DSO, a UK civil service body that exists to promote arms exports.

ADS summoning exhibitors to tea at the UK Pavilion at #IDEX2017 pic.twitter.com/WKYoXEEcB8

All the major firms that arm Saudi Arabia and its allies were at the event displaying weapons, many of which have been used in air strikes in Yemen, including the Eurofighter jet.

Middle East Eye has also learned that BAE Systems used the event to showcase the British-made Hawk Advanced Trainer, including presenting a scale model fitted with Brimstone missiles and Pavey IV bombs that have been used by Saudi forces over Yemen.

It is unclear whether the controversial weapons can be fitted to the training aircraft, and it is unlikely that this would be the case - but the display comes after Saudi Arabia agreed to purchase 30 of the jets in February 2016. Analysts say the training jets are vital for Saudi Arabia to train its pilots for action over Yemen.

They are among the most powerful weapons in the UK’s arsenal and have been deployed in several conflicts by the Royal Air Force. A defence source told MEE the weapons are “battle proven” and “very attractive to the Saudi and UAE air forces operating in Yemen”.

The display of British military hardware in the UAE comes at a time of ongoing international condemnation of civilian deaths caused by Saudi-led air strikes in Yemen.

According to reports from IDEX 2017, British arms firms are continuing to concentrate on arms exports to the Middle East, despite a partial US arms embargo against Saudi Arabia implemented by former President Barack Obama in December 2016, and an outstanding challenge in British courts.

Andrew Smith, a spokesperson for Campaign Against Arms Trade, said many of the companies soliciting business in Abu Dhabi are the same firms that have “profited from the destruction of Yemen”.

“Events like IDEX don't make a war-torn region any safer, all they do is put even more arms into the hands of repressive regimes while providing photo ops and political support to the brutal Emirati dictatorship,” Smith told Middle East Eye.

BAE Systems, Raytheon and MBDA have repeatedly said they comply with all UK and US legislation governing arms exports to the region. They also say that their weapons are "guided" or "precision" munitions and are designed to help avoid civilian casualties.

Nonetheless, the role of British arms companies at the event has prompted renewed calls for a halt to arms exports to Saudi Arabia, this time coming from the Liberal Democrats.

Tom Brake MP, the opposition party’s foreign affairs spokesperson, told MEE: “The weapons on display at IDEX, many of which have been deployed by the Saudi-led coalition in Yemen to murderous effect, must serve as a chilling reminder to the UK government of its obligation to suspend arms sales to Saudi.”

Campaigners have also raised concerns that a British government minister was sent to speak at the event.

Despite claims of human rights violations in the UAE, the UK’s minister for defence procurement, Harriett Baldwin MP, told journalists and delegates at the show that that she was “proud” to lead a delegation of almost 100 UK companies.

Good to meet crew of @MCM1_CREW1 at #IDEX2017 You do our country and @RoyalNavy proud -a difficult and important job https://t.co/VTHIrfO6Kx

“It is wonderful to be celebrating the ties that we have between our two countries and the important role that UK firms play in terms of security and prosperity of the Gulf states,” she said.

Saudi Arabia and its allies, including the UAE, have received logistical and intelligence support from the US, the UK and France in their battle against the Houthis and forces loyal to former Yemeni president Ali Abdullah Saleh since March 2015. The conflict has killed more than 10,000 civilians and displaced over three million people since 2015.

The UK’s military commitment to the region was on show at IDEX 2017 in the form of HMS Penzance, a Sandown Class minehunter, which attended the show.

Normally based at the Royal Navy’s new base at Bahrain, the warship was moored alongside Al Hili, a Baynunah-class corvette of the UAE Navy. The Baynunah-class have been deployed in the Saudi-led naval blockade of Yemeni ports, which has been condemned by aid agencies.

The conflict, aerial attacks and a blockade imposed by the coalition have triggered a humanitarian disaster, leaving 80 percent of the Yemeni population in need of aid. Amnesty International and Oxfam have repeatedly called for a halt to the blockage of Yemeni ports by Saudi-led forces.

Lucy Wake, Amnesty International UK’s government relations manager, said IDEX comes at a time of huge concern over the “clear risk” that UK weapons “could be used to carry out serious breaches of international humanitarian law in the war in Yemen”.

“We’re not against the arms trade where it’s conducted with proper safeguards, but we have real concerns about the UK’s current licensing procedures,” she told MEE.

Campaigners have been quick to point out that one of the biggest contracts publicly announced at the show was a $350m deal for US arms manufacturer Raytheon, which makes the Paveway IV guided bomb used in Yemen, to supply munitions to the UAE Air Force and the UAE Air Defence Force.

British firms at the show included SC Group, which was displaying its new Jackal 2 off-road vehicle, the HMT 400 Desert. The firm hopes to export the vehicle to the UAE to serve in the kingdom's Presidential Guard. The Jackal 2 is well-known in the UK, whose army used it in Afghanistan and Iraq.

Labour MP Andy Slaughter, a former shadow human rights minister, said there is “terrible logic” behind the growing role of the UK in supplying weapons to Gulf countries.

“[Having] very wealthy purchasers in a volatile area is nothing new, but the greater offensive role they are playing is. At the same time, the human rights record of the Gulf countries is more under scrutiny, especially where UK contracts – from Saudi arms supply to custodial services – are seen as complicit with abuses.”

On Wednesday, Raytheon said it intends to focus on the region in spite of the US suspending an arms deal with Saudi Arabia, affecting some of its sales.

“We intend to continue to comply with rules and regulations and work with countries, and figure out the best possible way to answer their needs, supply them with capabilities while never ever putting into question our support and compliance with US requirements,” John Harris, the chief executive of Raytheon International told The National. 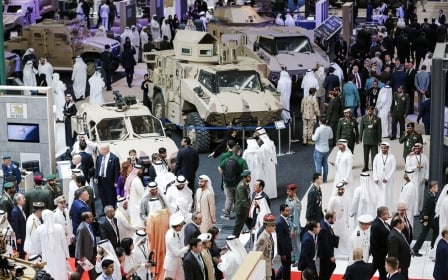 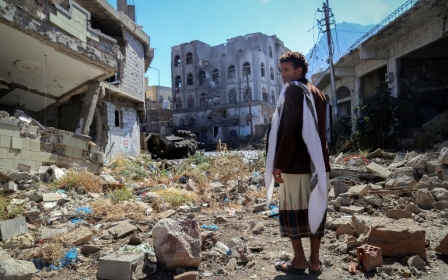 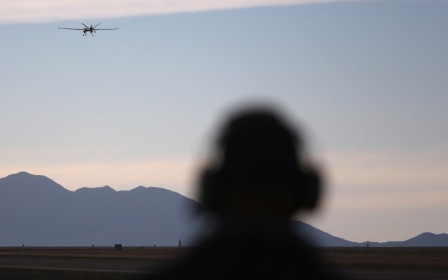