The British government discreetly called Saudi Arabia and reportedly praised the kingdom, a day after imposing sanctions on a number of Saudis accused of killing Jamal Khashoggi.

However, the next day, it has emerged, Ben Wallace, secretary of state for defence, called his Saudi counterpart Prince Khalid bin Salman bin Abdulaziz in a conversation unpublicised by the British government.

In it, Riyadh's official Saudi Press Agency reported, Wallace "expressed his country’s appreciation for the kingdom’s role in addressing threats to stability in the region" and "affirmed the country's government's keenness to strengthen defence relations between the two friendly countries, especially in the field of military exports". The British government did not publicise the call or provide a readout. However when contacted by Middle East Eye, the Ministry of Defence (MoD) confirmed that Wallace spoke to Saudi Arabia to "discuss wider regional security and export licences".

Wallace's call came on the same day that the UK announced the resumption of arms sales to Saudi Arabia despite evidence of "possible" war crimes in Yemen.

International Trade Secretary Liz Truss made the announcement on Tuesday saying the government regarded any breaches of international law as "isolated incidents".

She said the government had completed a review of how arms export licences were granted, complying with an earlier court ruling that suspended sales over rights abuse concerns.

"The incidents which have been assessed to be possible violations of international humanitarian law occurred at different times, in different circumstances and for different reasons," Truss said in a statement.

The government said it would not approve new licences prior to a review.

'The Saudi-led bombardment of Yemen has created the world's worst humanitarian crisis, and the government itself admits that UK-made arms may have played a central role on the bombing'

In a statement, the Campaign Against the Arms Trade (CAAT) slammed the decision as "morally bankrupt".

"The Saudi-led bombardment of Yemen has created the world's worst humanitarian crisis, and the government itself admits that UK-made arms may have played a central role in the bombing," said CAAT's Andrew Smith.

"We will be considering this new decision with our lawyers, and will be exploring all options available to challenge it."

Many opposition politicians noted the juxtaposition of sanctioning Saudi officials over human rights abuses one day, then opening up arms exports the next.

While announcing the sanctions in parliament on Monday, Raab said the new sanctions would make it "crystal clear to those who abuse their power to inflict unimaginable suffering: we will not look the other way, you cannot set foot in this country and we will seize your blood-drenched, ill-gotten gains if you try".

Caroline Lucas, of the Green Party, tweeted: "How the foreign secretary can say on one day that the UK will act as a force for good in the world, standing up for human rights, and then on the next, agree to this moral outrage is just unbelievable".

"The hypocrisy leaves me lost for words," she added. 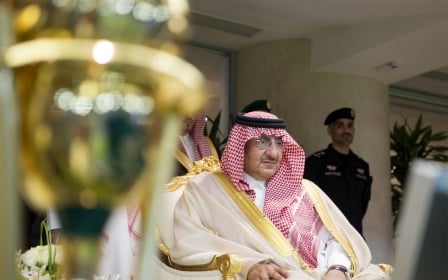