The UK should consider limiting Israel's preferential access to British markets if it goes ahead with its planned annexation of large parts of the occupied West Bank, the House of Lords International Relations and Defence Committee said.

In a letter addressed to Minister of State James Cleverly, Baronness Joyce Anelay expressed concerns over the incoming Israeli government's plans to annex parts of the occupied West Bank, a move opposed by much of the international community.

"We condemn the continuing Israeli policy of the expansion of settlements as illegal and an impediment to peace," Anelay wrote in the letter released on Wednesday.

On Tuesday, EU foreign policy chief Josep Borrell told reporters that the 27-member states were divided on the matter.

As the UK is no longer bound by EU foreign policy, Anelay asked Cleverly to reassure her that the UK's position on unilateral Israeli annexation of Palestinian territories had not changed.

Anelay, who said she was representing the committee's 12 members, also asked what steps the UK should take to bring the parties back to negotiations in support of a two-state solution.

"How will the UK work with its partners to support this objective?," she wrote.

Finally, she asked about "consequences for [Israel's] preferential access to the UK market, as set out in the UK-Israel trade and partnership agreement.

"How would the UK distinguish between legal and illegal products in order to provide preferential access only for legal Israeli exports to the UK?"

Most European countries, including the UK, grant preferential treatment to goods produced in Israel but not to those made in illegal settlements.

Earlier this month, 127 current and former parliamentarians, including members of the Conservative Party, called on Prime Minister Boris Johnson to impose sanctions on Israel as punishment if it moves forward with annexation.

'Consider all the factors'

Israeli Prime Minister Benjamin Netanyahu has said cabinet discussions will start in early July over extending Israeli sovereignty to Jewish settlements and the Jordan Valley in the West Bank, as was mooted in US President Donald Trump's Middle East peace plan.

Palestinians have expressed outrage at Israel's plans to cement its hold on land it occupied in 1967, territory that Palestinians seek for an independent state.

Several European countries have also denounced the moves, backing sanctions against Israel in the event of annexation. France, Spain, Ireland, Sweden, Belgium and Luxembourg are all expected to call for a tough line on annexation at a video conference later this week, Haaretz reported.

While most of the international community is opposed to annexation, the United States has said it would back the Israeli plans as part of the broader solution for the conflict presented by Trump.

On Wednesday, US Secretary of State Mike Pompeo urged Israeli leaders to consider "all the factors" involved so that it squares with Washington's plan for the region.

Pompeo visited Israel on a one-day trip that included meetings with Prime Minister Benjamin Netanyahu and his coalition partner Benny Gantz. He did not meet with Palestinian leaders.

Anelay said a lack of leadership from the US, which has been the key mediator in the Israel and Palestine conflict for decades, highlights the need for "Europeans to play a more active role."

She added that the UK government "should be more forthright in stating its views on these issues, despite the views of the US administration." 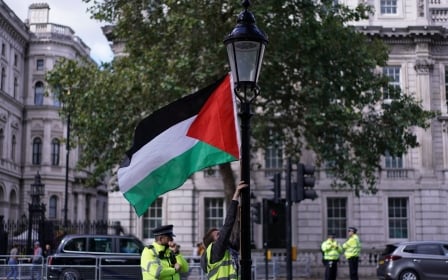