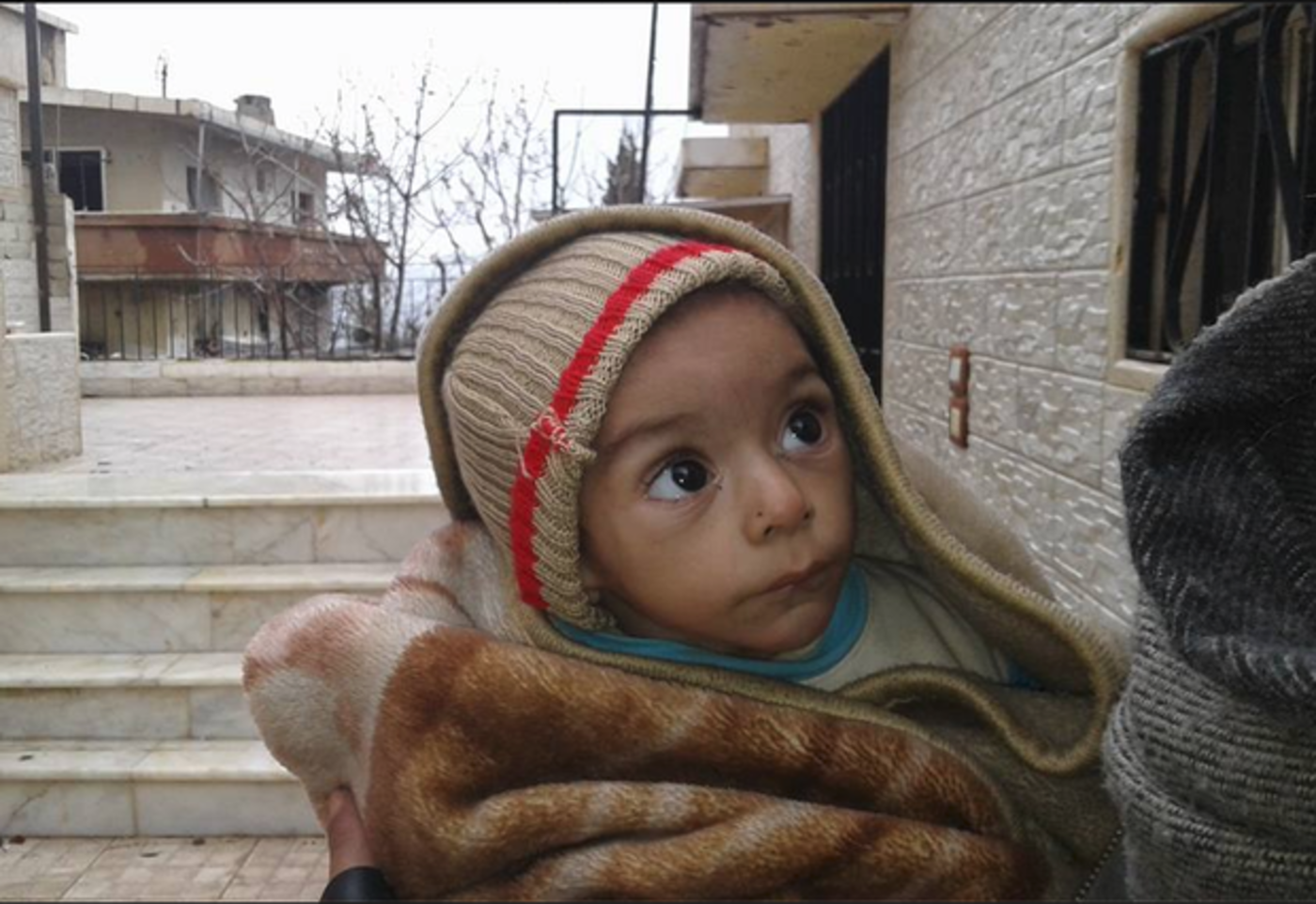 The UN agency responsible for monitoring and bringing aid to besieged areas of Syria allowed the Syrian government to edit the words "besieged" and "siege" out of its latest fundraising document, Middle East Eye can reveal.

Officials in Damascus changed the word "conflict" to "crisis" and deleted references to UN mine and bomb removal programmes in the UN’s 2016 Humanitarian Response Plan, according to an email seen by MEE and confirmation from two separate sources.

The words "besieged" and "siege" were replaced with "locations listed in UNSCR 2139, 2165, 2191", referring to adopted UN Security Council resolutions that have given aid agencies access to besieged areas without the Syrian government's approval.

Employees in the Damascus office of the UN Office for Coordination of Humanitarian Affairs (OCHA) published the report with the government’s changes, without clearance from OCHA’s offices in Turkey and Jordan, according to the email.

“The humanitarian response plan in Syria, like in any other country, is done in consultation with the authorities,” OCHA spokesman Jens Laerke said on Friday in response to questions about the edits. “This is normal practice.”

The document is to be used to support requests for $3.1bn of aid and will be used at a donor conference in London next month.

But the revelation that it was edited comes as the UN's secretary general called the use of starvation, particularly in the town of Madaya, “a war crime”.

“Let me be clear,” Ban Ki Moon said on Thursday. “The use of starvation as a weapon of war is a war crime.”

However MEE can reveal that the UN has systemically underreported the scale of these war crimes.

OCHA puts the current number of Syrians besieged at 393,700. Siege Watch, a monitoring network, says that figure stands at more than a million, while the NGO Doctors Without Borders (MSF), puts the figure at close to two million.

The same disparity is reflected in the number of areas under siege. OCHA lists 15, while the figure according to Siege Watch is 52.

The OCHA, whose aid convoys this week delivered food for the first time in four months to Madaya, had not classified the town as besieged.

At least 28 people have died of starvation in the town since July, when it was surrounded by Syrian government forces and Hezbollah fighters.

People had to eat leaves, grass and salted water to survive, as landmines, barbed wires and snipers ringed the enclave. And yet OCHA classified the town only as “hard-to-reach” in a map published in October.

In December, OCHA reported to the UN Security Council that aid had been delivered there in October.

Critics claim OCHA’s underreporting is systematic, both in classifying a town that is under siege and in estimating the number of people affected.

“The declining situation in Madaya should have been obvious in the monthly UN reporting,” Valerie Szybala, director of the Washington-based non-profit, The Syria Institute, told Middle East Eye this week.

“Instead, it took a group of activists spreading horrifying photos on social media to get the international community’s attention.”

Madaya’s absence in OCHA’s December report should have been “enough to set anyone’s alarm bells ringing about the UN numbers”, James Sadri, director of The Syria Campaign, an advocacy group campaigning for the protection of Syrian civilians, told MEE on Friday.

A number of factors could account for the discrepancy in the figures. Every siege is different; most sieges are enforced by forces loyal to the Syrian government, but opposition forces like Jaish al-Fatah and the Islamic State also surround towns in the north and those areas receive airdrops from the government. It is also difficult to verify information on the ground.

But even given those factors, Szybala said she believes the UN figures for besieged Syrians are intentionally low.

“The only explanation the UN has given is that we are using different definitions of besieged, but that’s not true,” Szybala said. “We are using their exact definition, word for word.”

Some besieged communities, like the Palestinian refugee camp outside of Damascus, Yarmouk, have been taken off the UN’s siege list soon after they receive an aid delivery, or like Muadimiyah, when a local truce is made, only to have access cut off again, yet they have not been put back on the UN’s list, she said.

Consequently, Szybala said, the world “isn’t even fully aware of what is happening, and there has been little pressure to address the situation.

“The UN has taken a front row seat as spectators to sieges of civilians that amount to extensive and protracted crimes against humanity,” she said.

For the desperate families of Madaya the debate is far from academic.

Raed Burhan, a former resident of nearby Zabadani whose grandmother, four aunts and cousins are besieged in Madaya, told MEE earlier this week after the first delivery of aid reached the town – with only enough food for 15 days at most, he said - that residents had given up hope on international aid agencies.

“They are feeling very disappointed and frustrated,” he said. “They were expecting this was the moment that we were going to feel free and leave Madaya, or we are able to eat as we used to eat before the siege.”

Several sources familiar with the humanitarian situation in Syria said they believe OCHA has downplayed its numbers in an attempt to keep its relationship with the Syrian government relatively positive in order to have any hope of gaining access to besieged areas in the future.

“Your colleagues in Damascus are either too close to the regime or too scared of having their visas revoked by the same powers that are besieging us,” more than 100 Syrian civil society actors wrote in an open letter to UN OCHA head Stephen O’Brien on Thursday.

Sadri of The Syria Campaign said he was aware of at least one credible report of the UN downgrading the classification of an area from besieged to ‘hard-to-reach’ in order to improve its ties with the government.

“Whatever the reasons,” Sadri said, “these numbers are highly suspect.”

OCHA spokesman Jens Laerke told MEE this week that a “tit-for-tat about numbers” blurred the fact that the aid agencies all had the same end goal.

“I think it’s highly unfortunate that we get into a discussion of these numbers and technicalities where I believe and we believe that essentially we are all after the same thing, namely for this to stop,” Laeke said. “In principle, one person under siege, is one person too many and we should speak out against that.

Week after week, he said, OCHA officials have publicly repeated that 4.5 million people in Syria are in what the UN classifies as “hard-to-reach” areas that are not under siege, according to UN definitions, but are underserved.

“We have repeatedly sought access to these locations to be able to deliver our life saving assistance in an independent manner,” Laerke said.

“Unfortunately, the parties to the conflict, bearing in mind that there are many, but in particular the Syrian government, have failed to respond positively to these requests. This is disregarding civilian life and dignity and it is against international humanitarian law.”

Only 10 percent of all UN requests for convoys to hard-to-reach and besieged areas were approved and delivered in the past year, according to a UN statement last week.

Most of the requests were submitted to, and held up at, the Syrian Ministry of Foreign Affairs, the latest OCHA report to the UN Security Council highlights.

According to the report, as of 30 November, 27 of OCHA’s 91 requests made in 2015 had been approved “in principle” by the ministry, with 48 requests still pending approval and 3 requests on hold by the UN as a result of what is described as “insecurity”.

Of the 27 convoys approved, 13 had been completed. Half of the remaining 14 were unable to proceed because of a lack of Syrian government approval, the report details.

Two other were held up by disagreement between the UN, Syrian Arab Red Crescent and the government on an access route, and another two were stalled because an opposition group had not agreed to provide safe passage.

“Many of them either are not processed or they at least, de facto, do not come to any fruitful conclusion for us,” Laerke said.

In the open letter to the OCHA head on Thursday, Syrian activists complained that legally, it does not need to ask the Syrian government’s permission to access besieged areas, following the adoption in 2014 of UN Resolution 2165 and it's renewals through Resolution 2191 and 2258.

“You are choosing not to deliver that aid to us, not because of danger from non­-state groups who are prepared to give safety assurances, but because the Assad regime is not giving you permission," said the letter. "What we do not understand is why you are chasing permission you do not even need."

In practice, however, Laerke and others have said actually entering Syrian territory with aid would be dangerous without a devoted UN peacekeeping force or other protective body – and that would require approval from the 15 members of the UN Security Council, including veto-prone Russia and China.

In the line of fire

Since 2011, 81 humanitarian workers in Syria have been killed, and 29 UN staff members are missing, according to OCHA’s December report.

“We are unarmed. We have nothing but our principles of neutrality and impartiality to protect ourselves when we head directly into a hot zone,” Laerke said.

“It’s not only the aid workers who are under threat,” he added. “It’s also those who receive the aid.”

“The UN can’t march into a town that is under attack by government forces or rebel forces and say move aside,” said Julien Barnes-Dacey, a senior policy fellow in the European Council on Foreign Relation’s Middle East and North Africa Programme.

“The UN is a tool in this, in the implementation, but fundamentally, it needs states to back it up,” he said.

Barnes-Dacey, who spoke with MEE before the revelations of government’s edits to the UN fundraising report, said he was unsure how much of a difference the discrepancy in numbers of besieged Syrians could make.

“Unfortunately, after five years of conflict, it’s hard to know the degree to which a higher number would really shift international focus in a meaningful way,” he said.

“The wider public audience is fatigued and confused by the Syrian conflict. It could well be the case that the larger number would make some difference, but I think fundamentally, devastation is so wide and so bleak, I’m not convinced that it’s a case of higher numbers being something that would move people in the right direction.”

For Szybala, higher figures would have alarmed decision-makers sooner and informed a public, who would have pushed for change.

“There hasn’t been appropriate pressure to uphold the security council resolutions that have already mandated access to these areas because the real extent of this crisis is not being accurately portrayed,” she said.

“The UN OCHA figures are simply accepted by UN member states as realistic portrayals of what is happening on the ground, but there is no oversight. There is no verification. There is no transparency.”

In besieged towns in Syria, said Burhan, who has family stuck in Madaya, residents are now putting their faith in their own social media campaigns because they can no longer wait for a solution to unlock the political Rubik’s cube that has left them to starve.

Over Skype, he named besieged areas across Syria, ticked off like a laundry list, that he thought would be next to hit the headlines, depending on the success of residents to garner international attention.

“People are thinking of solving the problems individually. Every town solves its problems,” he said. “Activists from Deir Ezzor are trying to launch a campaign for this city. I think that’s the next destination.” 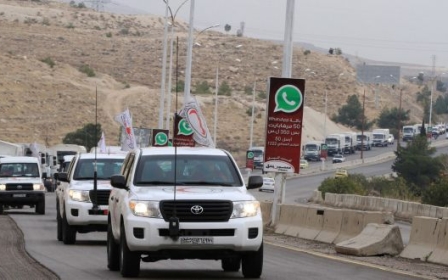