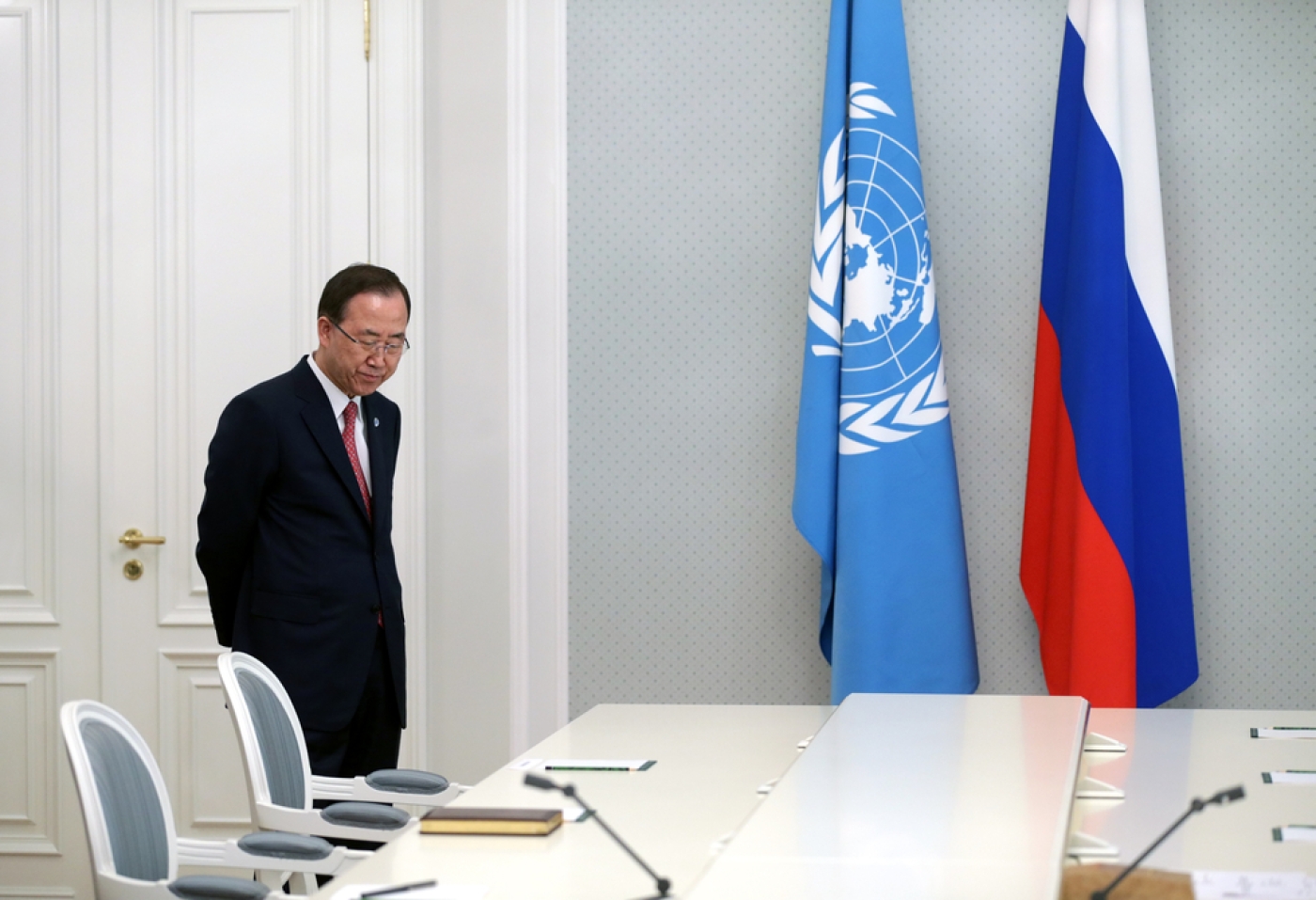 Secretary General of the United Nations Ban Ki-moon stands along awaiting to meet Russian President at Bocharov Ruchei state residence in Blach Sea resort of Sochi, on 17 May 2013 (AFP)
By
MEE and agencies

UN Secretary-General Ban Ki-moon on Wednesday took aim at Russia's military buildup in Syria and called on big powers to unite behind efforts to end the four-year war.

Ban spoke ahead of the annual UN gathering of world leaders to be attended for the first time in 10 years by Russian President Vladimir Putin, a key ally of Syrian President Bashar al-Assad.

"I am concerned by the parties arming and providing arms," Ban told a news conference, adding that such military aid would only make the situation "worse".

"There is no military solution - only a political solution" in Syria, he said.

US officials and sources on the ground say in recent weeks Russia has bolstered its presence, including in Latakia province, a stronghold of Assad's forces.

Russia has reportedly moved artillery units and tanks to an airport in Latakia province, along with dozens of personnel and temporary housing for hundreds more.

The military buildup has sparked alarm in the West just as the United States, Gulf countries and Russia were working on a new push for peace, with the UN envoy for Syria due to open talks in Geneva this month.

Ban said he would convene the foreign ministers of the five permanent Security Council members - Britain, China, France, Russia and the United States - for a meeting on Syria this month.

He lamented that the P5 were unable to agree on the way forward to address the crisis in Syria, saying that such divisions "make the situation insolvable."

"I am again urging all the parties and particularly members of the Security Council to show their solidarity at this time," said Ban.

A senior Security Council diplomat separately described Russia's move in Syria as a "very backward step" in efforts to seek an international consensus on ending the war.

Prospects for agreement on a two-stage transition in Syria, allowing Assad to remain in power in the initial stage, had brightened, but the Russian move "slammed that door shut," said the diplomat, who asked not to be named.

"By any measure, human suffering in Syria has worsened, not diminished," O'Brien told the 15-member council.

"He will meet (Foreign Minister) Walid Muallem because Syria expects answers to questions" about his plan, the official told AFP.

De Mistura's assistant, Ramzi Ezzedine Ramzi, handed the government a 60-page document in mid-August summarising ideas that the envoy had collected from the government, opposition and civil society.

A diplomat in Damascus said the Syrian authorities had then asked a series of questions and were now awaiting answers.

The diplomat, who spoke on condition of anonymity, said the government was insisting the "fight against terrorism" be a priority for the political process.

On 29 July, the envoy proposed a fresh approach to keeping the stalled peace efforts alive by inviting Syrians to take part in "thematic" working groups.

But the government does not want the work of the four groups to be binding, according to the diplomat.

The four committees are to be made up of people chosen by the government and the opposition.

They are tasked with addressing four main areas: security, political issues including elections, the military aspect including the fight against "terrorism" and a possible ceasefire, and the country's reconstruction.

It will be de Mistura's sixth visit to Damascus but the first since he condemned Damascus over 16 August airstrikes that killed nearly 100 people in the rebel-held town of Douma, near the capital, angering the government.

Assad's government has been at war with different rebel groups since March 2011, in a conflict that has killed at least 240,000 people and forced millions to flee abroad.