The United Nations Libya mission said it was alarmed by reports of "brutal and outrageous summary executions" in the eastern city of Benghazi on Wednesday, after pictures emerged appearing to show at least nine people being shot dead at the site of a twin car bombing.

The UN Libya mission, UNSMIL, suggested in a tweet that the gunman was Mahmoud al-Werfalli, a special forces commander wanted by the International Criminal Court (ICC) for allegedly carrying out a number of similar killings.

"(The UN) demands the handing over of Mahmoud al-Werfalli immediately to (the ICC) as it documented at least 5 similar cases, in 2017 alone, carried out or ordered by al-Werfalli," UNSMIL said on its Twitter account.

"Those responsible for committing or ordering summary executions are criminally liable under international law."

The gunman's identity has not yet been independently confirmed.

The photos, which were posted on social media and in local media, appear to show executions in front of Benghazi's Bayaat al-Radwan mosque, where a twin car bombing on Tuesday left at least 37 people dead.

One of the pictures shows a gunman dressed in military camouflage, pointing a weapon at the head of the first of a row of blindfolded men kneeling in blue jumpsuits in front of damaged mosque gates.

Another photo shows all but three of the people slumped forward on the road as the gunman makes his way along the line. It was unclear who the men were.

On the day of the double car bombing, the first blast hit worshippers leaving a mosque in Benghazi's central al-Salmani district. The second, about 15 minutes later, inflicted a number of casualties among people who had gathered at the scene.

The victims included both military personnel and civilians, officials said.

The toll was one of the highest from a single attack since Libya slid into turmoil after the uprising that toppled Muammar Gaddafi in 2011.

Benghazi was the scene of more than three years of conflict from 2014 until late last year, as forces loyal to eastern-based commander Khalifa Haftar battled militant Islamists and other opponents.

Al-Werfalli is from an elite unit attached to Haftar's Libyan National Army (LNA), which controls Benghazi.

After the ICC said it was seeking al-Werfalli's arrest in August, the LNA announced that it was investigating him and had detained him, though his whereabouts were unclear.

A spokesman for the LNA could not immediately be reached for comment on the pictures.

The pictures were posted as UN Libya envoy Ghassan Salame visited Benghazi on Wednesday, meeting Haftar at a military compound near the city and expressing condemnation of the car bombing.

The international community has increasingly courted Haftar, a divisive figure in Libya, as he has gained power on the ground. He is considered a likely candidate in elections that the UN has said it hopes can be organised by the end of 2018. 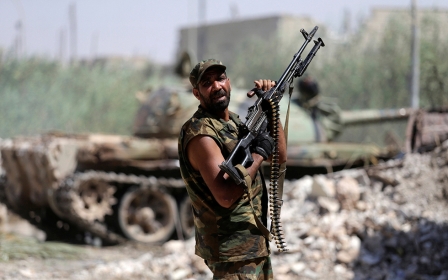