The assembly faces unprecedented circumstances due to the coronavirus pandemic, causing the event to go virtual 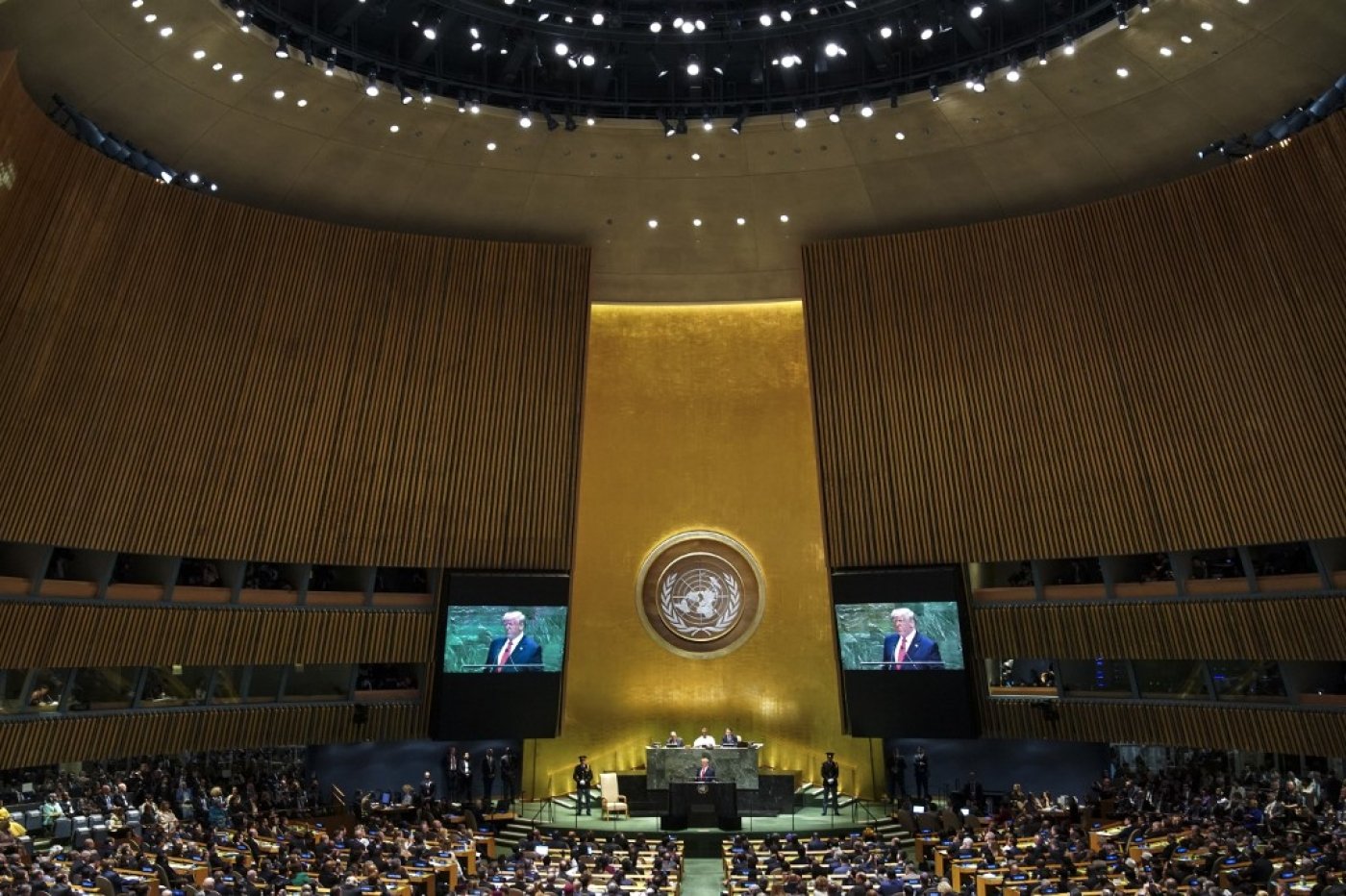 On the first day of the assembly, various developments in the Middle East were mentioned by numerous countries (AFP/File photo)
By
MEE staff
in
Washington

This year, the assembly faces unprecedented circumstances with the onset of the coronavirus pandemic, causing the event to go virtual for the first time in its history.

The General Assembly is a core component of the UN with manifold duties, including overseeing voting of new members, choosing non-permanent members of the UN Security Council and playing a part in electing the UN secretary general. It also gives observer status to non-member states including Palestine and The Holy See, as well as the European Union, whose speakers are allowed to address the assembly.

On the first day of the seven-day event, various situations and developments in the Middle East were mentioned by numerous countries, ranging from the normalisation agreements between Israel and the United Arab Emirates and Bahrain, to the conflicts in Syria and Yemen.

Here's a look at what the different world leaders had to say about the Middle East:

Brazilian President Jair Bolsonaro affirmed his country's support for the US-brokered normalisation agreements between Israel and the United Arab Emirates and Bahrain, countries he called "three friends of Brazil".

"Brazil's new policy of simultaneously pursuing closer relations with Israel and the Arab countries is very much in line with those initiatives which finally shine a light of hope for that region."

Like Israeli Prime Minister Benjamin Netanyahu, Bolsonaro is an outspoken admirer of US President Donald Trump, who moved the United States' embassy to Jerusalem after breaking with international consensus and recognising the city as Israel's capital.

US President Donald Trump addressed the United Nations on Tuesday with remarks boasting of a "dawn of a new Middle East", following the signing of an agreement between two Arab nations, the United Arab Emirates and Bahrain, and Israel.

"After decades of no progress, Israel, the United Arab Emirates, and Bahrain, all signed a historic peace agreement in the White House, with many other Middle Eastern countries to come," Trump said.

"These groundbreaking peace deals are the dawn of the new Middle East."

The deals make the UAE and Bahrain the third and fourth Arab states to take such steps to normalise ties since Israel signed peace treaties with Egypt in 1979 and Jordan in 1994.

Trump repeated a similar comment he has made since the announcement of the normalisation agreement, saying "there is no blood in the sand", a trope insinuating the Middle East has been in perpetual conflict.

Turkish President Recep Tayyip Erdogan began his address at the General Assembly by reiterating his call for a reform of the international body, saying the "world is bigger than five pieces", referring to the five permanent members of the Security Council which hold veto power on UN resolutions.

Erdogan affirmed his support for the UN-led peace process in Syria, saying it is "the only way that Syria can achieve a lasting peace while preserving its territorial integrity and political unity".

He also called for a permanent political solution in Libya, and said the international community is responsible for stopping the war in Yemen which has led to one of the world's worst humanitarian situations.

"History will not forgive those who covet Yemen sovereignty, political unity, and territorial integrity with the intention of gaining influence in the region, and those who overlook the continued sufferings of the Yemenis," he said.

The Turkish president also criticised both Trump's so-called "deal of the century" as well as the recent normalisation agreements between Israel and the UAE and Bahrain.

"The dirty hand that breaches the privacy of Jerusalem, where the sacred places of the three great religions coexist is constantly increasing its audacity," Erdogan said, referring to Israel.

Erdogan reiterated that Turkey "will not support any plan that the Palestinian people do not give consent to".

South Africa reiterated Turkey's call for an expanded Security Council, stressing the need for more representation from the African continent.

President Cyril Ramaphosa also called for the end of the occupations of Western Sahara and Palestine, saying South Africa stood by "the Palestinian people's right to self determination".

Cuba also condemned Israel's continued occupation, insisting on the Palestinian's "inalienable right to build their own state within the borders of 1967, with East Jerusalem as their capital".

President Miguel Diaz-Canel said he supported a "negotiated solution" in Syria and stated the country's solidarity with both Iran and the Sahrawi Arab Democratic Republic, also known as Western Sahara.

King Abdullah II of Jordan began his remarks at the UN like many other countries, by addressing the coronavirus pandemic and the need for global cooperation to combat the virus.

Jordan's monarch also noted the threat of food security in the Middle East, particularly in the country of Lebanon, which is still suffering in the aftermath of a massive chemical explosion that rocked the port of Beirut last month.

On Palestine, King Abdullah said Jordan is still committed to a two-state solution with East Jerusalem as the capital of a future Palestinian state.

"We cannot resolve this conflict without working to preserve Jerusalem," he said.

Sheikh Tamim bin Hamad al-Thani discussed a number of developments in the region, beginning by criticising the Saudi-led blockade on the country.

'Any arrangements that are not based on these parameters will not achieve peace, even if they're called arrangements for peace'

Thani said Doha has strengthened its participation in international dialogue in different crises, despite the blockade.

The Qatari emir stressed that the only way to achieve "just peace" with Israel is under the conditions set by the 2002 Arab Peace Initiative.

"Any arrangements that are not based on these parameters will not achieve peace, even if they're called arrangements for peace."

He also welcomed the recent ceasefire in Libya, where warring parties have been fighting for control for more than half a decade, and criticised the UN for its failure to maintain peace and protect civilians in Syria.

On Lebanon, Thani said Qatar "stood by our Lebanese brothers without conditions". He also said the necessary government reform "will be incumbent upon the Lebanese themselves and not by diktats". French President Emmanuel Macron has been "demanding a follow-up mechanism" from Lebanese leaders, including a legislative election in six to 12 months.

Iranian President Hassan Rouhani used the UN pulpit to condemn the US' history of intervention in the Middle East.

"Footage broadcast for the world concerning the treatment of an African American by the US police is reminiscent of our own experience. We instantly recognise the feet kneeling on the neck as the feet of arrogance on the neck of independent nations."

"They are directly involved, along with the regional accomplices, in every single case of occupation, war, and aggression, between Palestine, Afghanistan, Yemen, Syria, Iraq, Lebanon, Libya, Sudan and Somalia."

The Iranian president used the rest of his speech to project an image of Iran as the vanguard against tyranny and oppression in the region, mentioning the country's role in helping Afghanistan fight against the Soviet invasion in the 1980s, to standing with Kuwait against Saddam Hussein's invasion of the Gulf state.

"The era of dominance and hegemony is long over," Rouhani said. "Our nation and children deserve a better and safer world, based on the rule of law."

He also said the US can impose "neither negotiations, nor war" on the Islamic Republic, saying his country is not "a bargaining chip in US elections and domestic policy".

French President Emmanuel Macron, who spoke for more than 40 minutes, dismissed US efforts to restore UN sanctions against Iran, saying that the Trump administration's "maximum pressure" campaign has not worked and Paris maintains its commitment to the 2015 nuclear deal.

"The maximum pressure strategy, which has been underway for several years, has not at this stage made it possible to end Iran's destabilising activities or to ensure that it will not be able to acquire nuclear weapons," Macron said.

Macron also said that France was ready to talk with Turkey, with the two countries having stakes in Libya as well as the rights to gas exploration in the Mediterranean Sea.

"We respect Turkey. We are ready for dialogue with her. But we expect her to respect European sovereignty, international law and to provide clarification about her action in Libya, and in Syria," he said.

Egypt also echoed Turkey's call to expand the Security Council and the need for representation from the African continent.

Egyptian President Abdel Fattah el-Sisi said, however, that Cairo is committed to helping Libyans "rid their country of armed militias and terrorist organisations", saying that some countries are interfering in the conflict by sending foreign fighters.

The comments from Sisi, who supports Khalifa Haftar's forces in Libya against the UN-recognised Government of National Accord (GNA), can be seen as a barb against Ankara, which supports the Tripoli-based GNA.

Sisi said that Turkish involvement in the North African country is "an effort to fulfill their well known greed and long-standing colonial illusions".

The Egyptian president also called for an agreement to be made with Sudan and Ethiopia over the latter's Renaissance Dam project.

Egypt and Sudan suspended talks over the project after Addis Ababa presented a proposal that did not meet the demands of the two downstream countries.

"The Nile River must not be monopolised by one state," Sisi said.