The largest provider of food assistance to Syrian refugees announced Monday that it has stopped providing food vouchers to 1.7 million refugees in neighbouring countries as a result of a funding shortfall.

The Rome-based UN World Food Programme said the consequences of suspending the programme will be “devastating” for Syrian refugees in Jordan, Lebanon, Turkey, Iraq and Egypt already struggling to survive harsh winter conditions and who may now go hungry.

"A suspension of WFP food assistance will endanger the health and safety of these refugees and will potentially cause further tensions, instability and insecurity in the neighbouring host countries," said WFP Executive Director Ertharin Cousin.

WFP said the refugees affected by the suspension of food aid included many children in Lebanon and Jordan facing harsh winters without adequate clothing or footwear, and living in tents already drenched in mud that has made hygiene precarious.

The WFP, which requires $64 million to run the programme in December alone, said the shortfall was caused by unhonoured cash pledges. Cousin said distribution of the vouchers will resume as soon as the cash comes in.

The agency is also contending with several “level-3” emergencies, the UN’s most serious crisis designation, including situations in Iraq, South Sudan, Central African Republic and west African countries affected by the Ebola outbreak.

“All of these countries are of course affecting our ability to expand our programmes and meet the needs,” WFP communications officer Joelle Eid said on Monday.

News of the voucher programme suspension comes a month after WFP cut food aid to 4.2 million Syrians inside the country, also as a result of a funding shortfall.

"WFP budget projections for 2014 were $4.3 billion. Now, the needs are $8.5 billion," World Food Programme's assistant executive director Elisabeth Rasmusson said when the first cuts were announced, adding that "the funding needs for the Middle East have at least doubled to around $4 billion" with Syria accounting for half of the amount.

A high-level donor conference for Syria is expected to be held in January. 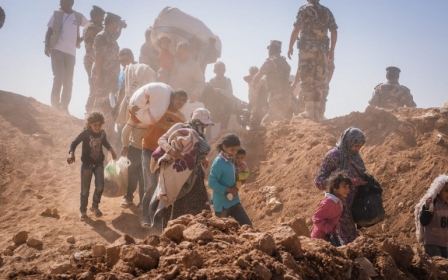 Inside Jordan
As refugees are turned away, Jordan reaches its humanitarian limits