The United Nations's top court has ordered the United States to ensure that sanctions against Iran do not impact humanitarian aid or civil aviation safety.

Judges at the International Court Of Justice handed a victory to Tehran, which had argued that sanctions imposed since May by the administration of US President Donald Trump violate the terms of a 1955 treaty of amity, economic relations and consular rights between the two countries.

However, Wednesday's ruling is likely to have at most limited practical impact on the implementation of sanctions, which Washington is reimposing and tightening after pulling out of a 2015 nuclear deal that Iran signed with world powers.

US Secretary of State Mike Pompeo rejected the decision. He said the United Nations court, often called the "World Court", had no jurisdiction over the sanctions, which Pompeo said were essential to US security interests, and that Washington would "terminate" the little-known treaty with Iran.

"This is a decision, frankly, that is 39 years overdue," Pompeo told a news conference. "Iran is abusing the ICJ for political and propaganda purposes and their case, as you can see from the decision, lacked merit."

Iranian Foreign Minister Mohammad Javad Zarif slammed the United States as an "outlaw regime" on Wednesday, after Washington announced its withdrawal from the 1955 accord.

"Today US withdrew from an actual US-Iran treaty after the ICJ ordered it to stop violating that treaty in sanctioning Iranian people. Outlaw regime," Zarif wrote on Twitter.

Iran will retaliate. Get over it
Seyed Mohammad Marandi
Read More »

The ICJ, which is based in The Hague, in the Netherlands, is the United Nations' highest court for resolving disputes between nations.

Its rulings are binding and cannot be appealed, but it has no power to enforce them, and both the US and Iran have effectively ignored its decisions in the past in cases they have brought against each other.

The court found that assurances offered by Washington in August that it would do its best to ensure sanctions would not affect humanitarian conditions were "not adequate to address fully the humanitarian and safety concerns raised" by Iran.

"The court considers that the United States must, in line with its obligations under the 1955 treaty, remove by means of its choosing any impediment arising from the measures announced on 8 May 2018," said the presiding judge Abdulqawi Yusuf, reading a summary of a ruling by the 15-member panel of justices.

The sanctions may not hurt "exportation to the territory of Iran of goods required for humanitarian needs such as medicines, medical devices and foodstuffs and agricultural commodities as well as goods and services required for the safety of civil aviation," he said.

The court said sanctions on goods "required for humanitarian needs... may have a serious detrimental impact on the health and lives of individuals on the territory of Iran".

During four days of hearings in late August, Iran's lawyers accused Washington of "strangling" its economy.

Washington however told the court that it has no jurisdiction to rule on this case as it concerns a matter of national security.

Wednesday's ruling is in fact a decision on so-called provisional measures ahead of a final decision on the matter, which may take several more years, experts said.

Washington argued last month that Iran's request was an attempt to misuse the court and that the 1955 treaty specifically ruled out using courts to resolve disputes.

The treaty was signed long before Iran's 1979 Islamic Revolution which turned the two countries into enemies.

.@SecPompeo: In light of how #Iran has abused the @cij_icj as a form for attacking the United States, I am therefore announcing today that the United States is terminating the Treaty of Amity with Iran. pic.twitter.com/AlPqUswsBC

"Iran seeks to challenge the United States’ decision to cease participation in the Iran nuclear deal and to re-impose the sanctions that were lifted as a part of that deal," Pompeo told reporters on Wednesday. "Iran is attempting to interfere with the sovereign rights of the United States to take lawful actions if necessary to protect our national security. And Iran is abusing the ICJ for political and propaganda purposes."

US State Department legal adviser Jennifer Newstead had said Iran's real quarrel was its frustration over US plans to pull out of the 2015 nuclear pact, under which Iran agreed to curbs on its nuclear programme in exchange for the lifting of international sanctions.

The unilateral US move has been opposed by the other countries that are party to the agreement, including Washington's close European allies Britain, France and Germany, as well as Russia and China.

A new series of sanctions is due to go into effect on 4 November, aimed at sharply curtailing Iranian oil exports.

The US president recently heavily criticised the separate International Criminal Court in the Hague over a probe into alleged US abuses in Afghanistan. 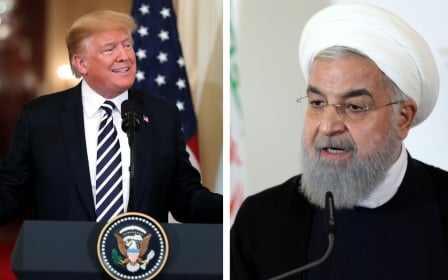