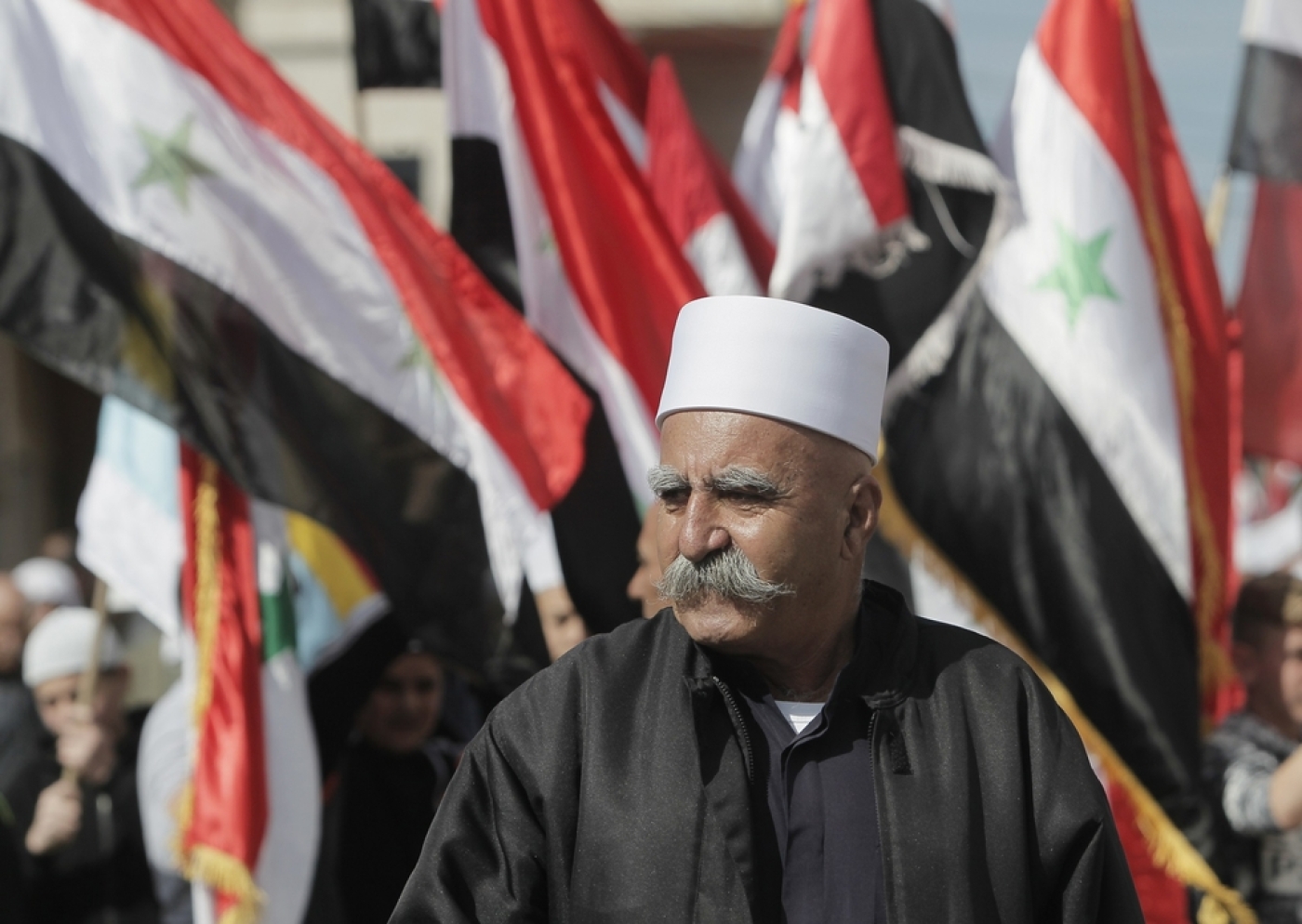 BEIRUT - Earlier this month, student Rayan Abu Fakhr was found stabbed to death near a restaurant in Sweida. The student’s family and friends started a protest, demanding the death penalty for those responsible.

When local government did not react fast enough, hundreds of demonstrators stormed the local headquarters. According to some reports in pro-opposition media, officials fled the scene.

This might not be as significant a scene if it were not in the heart of a city controlled by the Syrian government.

And yet the demonstrations earlier this month in Sweida, a southern, Druze-majority town, is the latest in a series of protests - so rare for many government-controlled areas of Syria - in which a burgeoning youth protest movement has tested local and national officials, and even called for the overthrow of Bashar al-Assad as president.

Since last year, two student-led protest movements have emerged in Sweida. "You Suffocated Us" (خنقتونا#) launched this time last year, while "You Destroyed Us" (حطمتونا#) emerged in the spring. Both movements nominally focus on local issues: poor administration, corruption or rising prices - although "You Destroyed Us" have tended to veer into openly anti-government rhetoric when pushed.

Naef, who was a "You Suffocated Us" activist in Sweida until he fled the country last year, said the movement originally focused on economic problems, such as rising prices.

“The youth do not follow any particular religious or political agenda, beyond the fact that citizens cannot live, eat or drink…and their income is insufficient," he said.

“In Sweida, you might find someone whose own brother does not know that he’s an activist, because of of fear,” Naef said. “We’ve all used fake names and when the Internet was blocked, we'd use landlines with riddles in our conversations when discussing what time we'd gather, or where, and then each activist would tell 10 of his friends.”

Firas, a veteran activist and leftist from Sweida who was incarcerated in government prisons in the 2000s, has watched the city’s youth movements develop.

“For a long time, these movements would chant and make demands related to the economy... or conscription. Usually the demands are civic ones related to Sweida,” he said.

“But whenever there's an escalation, the chants turn against the regime. Then they might start calling for the overthrow of the regime, or for the president to leave.”

That escalation has been brewing since last year.

Rise and fall of protests

In September, Sheikh Wahid al-Balous, the head of a Druze militia considering itself independent from both Assad and the opposition, appeared in a video angrily defending the Druze right to bear arms to protect their community.

The dispute was part of a long-term disagreement between Sweida and Damascus about Druze self-protection.

Soon after, Balous died in a car bomb explosion. Many suspected the government’s mukhabaraat spy service was responsible. Protests broke out.

“They tried to blame the movement for the explosion, knowing that it’s made up of students and ordinary people," Naef said. "And so the regime went after people who were going out to demonstrations."

Naef fled amid signs of a looming crackdown. Protests subsided, but then re-appeared in the spring.

In mid-April, activists from "You Destroyed Us," also known as "You Broke Us," launched a "revolutionised sit-in" in Sweida’s main square, on the 70th anniversary of the end of the French mandate over Syria.

Then in May, demonstrators rallying against mismanagement in the province in central Sweida began chanting 2011 revolutionary slogans and made reference to domestic events in Syria - including the “siege of cities, destruction and violence, and arbitrary arrests,” but without directly pointing the finger at Damascus.

According to witnesses, members of the pro-government plainclothes shabiha militia turned up. They clashed. A warning shot was fired.

"There was physical contact and firing in the air," recalled Firas, who was at the confrontation. “Even though it was only one shot fired, this was a sign that there was an escalation happening - that if the movement continued with its demands, they would be stopped with force.”

The rise and fall of Sweida's protest movements continues.

‘Never in a direct way’

On the face of it, events in Sweida can look like an anachronism of 2011 Syria. And yet the city is home to complex dynamics and under-currents that have kept it at arm's length from the worst of Syria's five-year conflict.

Hossam al-Katlaby, the VDC's executive director, says that it all comes down to the “special and cautious way” the Syrian government has dealt with unrest in Sweida.

“This is part of the strategy of dealing with minorities,” he said.

Historically, Damascus has treaded carefully with the Druze, a community of Muslims which dates back to the 11th-century Fatamid Dynasty; their roots have been the subject of speculation, controversy and orientalist fantasy for years.

However, the community has been at the centre of the creation of modern Syria, with Druze resistance leader Sultan Basha al-Atrash defeating the French colonial masters in a battle near Sweida in 1925, before partaking in the successful Independence Intifada in 1945.

Atrash died in Sweida in the 1980s, a hero to Syria and the Druze.

Although one of Syria’s early military dictators attempted to quell the Druze after independence, a cautious peace existed between Sweida and Damascus after that.

Gaith fled Sweida after months of protests against the government that began on 26 March 2011, the anniversary of the death of Atrash. Protesters carried the independence leader's picture and called for the downfall of the current government.

“It's a Druze area, so [security] tried not to kill anybody,” Gaith said. “They didn't shoot anyone in the streets while they were protesting. A lot of people ... would die in prison from torture, and [the government] maybe killed three of four activists in my city, but it was never in a direct way.”

A small number of Druze from Sweida later joined the armed opposition, including some fighting for a brigade named in honour of Atrash, who were later captured and punished by the Nusra Front. But the majority in Sweida have remained with the government, or silent.

Wael, a doctor in one of Sweida’s public hospitals, blames a "change in psyche" caused by the war and the socio-economic malaise that came with it. He did not mention the government.

“Some citizens are suffering economically from the rising living costs... while there has been an emergence of a class of traders and smugglers caused by crises of fuel, food and electricity,” Wael said. “Because of all this, there has been a change in the psyche of the population [in Sweida].”

The Druze and sectarianism

The Syrian government has long presented itself as a protective bulwark for the Druze, in return for loyalty and quiescence. Nusra and Islamic State both regard the Druze as heretics, and in June last year Nusra massacred 23 Druze villagers in Idlib province, purportedly over a “property dispute”.

After the massacre, Israel promised a “humanitarian” operation to harbour refugees and “prevent a situation where refugees are massacred”.

Some have seen this as an attempt to either legitimise Israel’s occupation of the Golan Heights, or usurp Assad as the Syrian Druze's perceived protector. Earlier this year, an influential Israeli analyst wrote that by “strengthening the rebels’ position in the south,” the West could “convince the half million Druze in the southwestern city Sweida to turn away from the Assad regime”.

The Druze are often discussed as a single unitary group - seen as pro-government by the opposition, heretical by some rebels, and a possible opportunity for international powers.

Maria Kastrinou, an anthropologist and author of Power, Sect and State in Syria: The Politics of Marriage and Identity Amongst the Druze, said that has left the Druze "with no good options".

“The increasing sectarianisation of the Druze and other minorities in Syria is a result - rather than the cause - of the war in Syria," she said.

Kastrinou warns about "sectarianisation" carried out by the Syrian government and rebel groups, or also international powers involved in the conflict.

“It makes categories out of people that are diverse. And making categories in a context like the Syrian conflict is really dangerous.”

While Sweida lives in suspended calm, disturbed by protests that ultimately will not threaten the balance of power in the south, the sectarianisation of the Druze may have a much longer-term impact.

The war has created an image of Sweida as a pro-government stronghold, the Druze as meek supporters, when the reality is far more complex.

“It is a recipe for disaster,” said Kastrinou. “And it’s a dangerous card [to play] - both in terms of ISIS, but also for any kind of future reconciliation in Syria.”

All names of interviewees in Sweida were changed to protect their identities.