US admits Mosul air strike that killed scores of civilians

US Central Command says it has opened an investigation into the strike, which claimed as many as 200 lives A general view taken on March 25, 2017, shows smoke billowing following air strikes on Mosul, during the government forces' ongoing offensive to retake the city from Islamic State (AFP)
By
MEE and agencies

The US-led coalition against the Islamic State group in Iraq said Saturday that it struck a location in west Mosul where civilians were reportedly killed by aerial bombing.

"An initial review of strike data ... indicates that, at the request of the Iraqi security forces, the coalition struck (IS) fighters and equipment, March 17, in west Mosul at the location corresponding to allegations of civilian casualties," it said in a statement.

US Central Command said that it had opened an investigation "to determine the facts surrounding this strike and the validity of the allegation of civilian casualties".

The statement came as tens of thousands of people fled the Iraqi city of Mosul, held by IS, in fear of US-led air strikes and fierce fighting by Iraqi ground troops.

More than 200,000 people have fled fighting in west Mosul since the operation to retake the area from IS fighter was started last last month, Iraq's ministry of migration and displaced said Saturday.

Iraqi government forces paused in their push to recapture Mosul from Islamic State militants over the weekend because of the high rate of civilian casualties, a security forces spokesman said.

Meanwhile the United Nations has expressed "deep concern" over the high number of civilian casualties in the Iraqi city of Mosul, following reports that as many as 200 people were killed in air strikes by the US-led coalition.

"We are stunned by this terrible loss of life," Lise Grande, the humanitarian coordinator for Iraq, said in a statement.

On Friday The New York Times reported suggestions from an Iraqi military officers that the rules of engagement for US aircraft had been relaxed under President Donald Trump.

During the US election campaign last year, the US President repeatedly said that the families of "terrorists" should also be targeted.

Bashar al-Kiki, the head of the Nineveh provincial council, said that "dozens" of bodies were still buried under rubble in the city, while provincial governor Nawfal Hammadi said that more than 130 civilians had been killed.

It was not possible to independently confirm the tolls from the strikes in Mosul, the capital of Nineveh province and Iraq's second city.

The insurgents have also used civilians as human shields and opened fire on them as they try to escape IS-held neighbourhoods, fleeing residents said.

The US-backed offensive to drive IS out of Mosul, now in its sixth month, has recaptured most of the city. The entire eastern side and about half of the west is under Iraqi control.

But advances have stuttered in the past two weeks as fighting enters the narrow alleys of the Old City, home to the al-Nuri mosque, where IS leader Abu Bakr al-Baghdadi declared a caliphate spanning large areas of Iraq and Syria in 2014.

"The recent high death toll among civilians inside the Old City forced us to halt operations to review our plans," a Federal Police spokesman said on Saturday.

"It's a time for weighing new offensive plans and tactics. No combat operations are to go on."

The coalition has said the reports of civilian casualties are being investigated.

"We need to make sure that taking out Daesh [Islamic State] from the Old City will not cost unwanted high casualties among civilians. We need surgical accurate operations to target terrorists without causing collateral damage among residents," the Federal Police spokesman said.

An army statement published in the al-Sabah state newspaper said that future operations would be carried out by ground troops highly trained for urban combat.

"Our heroic forces are committed to the rules of engagement which ensure protection of civilians" the statement said.

A US deputy commanding general for the coalition told Reuters on Friday that the solution could lie in a change of tactics. The Iraqi military is assessing opening up another front and isolating the Old City, where the militants have put up fierce resistance, US Army Brigadier General John Richardson said.

Fleeing residents have described grim living conditions inside the city, saying there was no running water or electricity and no food coming in. Aid agencies say as many as 600,000 civilians remain in the western half of Mosul.

But families are streaming out of the northern city in their thousands each day, headed for cold, crowded camps or to stay with relatives. Hunger and fighting are making life unbearable inside.

The Iraqi Observatory for Human Rights said that since the campaign on western Mosul began on 19 February, unconfirmed reports have said nearly 700 civilians have been killed by government and coalition air strikes or Islamic State actions.

The militants have used car bombs, snipers and mortar fire to counter the offensive. They have also stationed themselves in homes belonging to Mosul residents to fire at Iraqi troops, often drawing air or artillery strikes that have killed civilians. 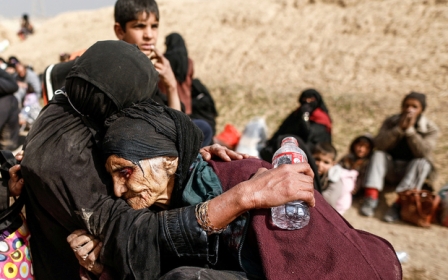 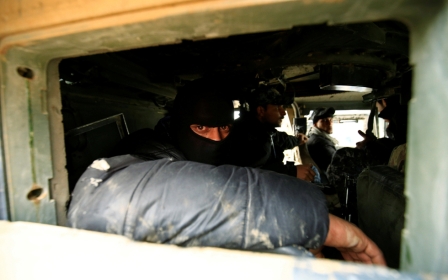