US admits only 'some' Syria ceasefire hotline volunteers speak Arabic The US State Department has admitted that a hotline set up to field reports of violations of the ceasefire in Syria is being manned by volunteers who do not all speak fluent Arabic.

A spokesman told reporters on Wednesday that the staffing of the hotline was being reviewed following complaints from Syria that callers were having difficulty making themselves understood.

According to the US-based Syria Direct website, one US official mistook "Harbnifsah" - a frontline village - for "Harb Bebsi" or "Pepsi War".

The report said some reporters and activists had given up on the US line and were instead reporting breaches to the United Nations or to the opposition.

On Wednesday, spokesman Mark Toner admitted that only some staff working for the broader Syria team, which is also accessible via email, text and phone applications including WhatsApp, Telegram and Google Voice, spoke Arabic.

"We did set up an information hotline that was staffed 24/7 where violations could be reported.. and the hotline was part of our broader Syria team, and it was staffed by State Department personnel, some of whom spoke or speak Arabic," said Toner, who added that those manning the hotline were doing so in addition to their usual jobs.

"We are aware that there were some language issues, and we're working to correct those, because it's important that we have Arabic speakers that are able to field incoming calls."

Asked whether fluency in Arabic had been a requirement for volunteers, Toner said: "It was, just – but given the time limits on setting this up, probably some of the language skills weren’t properly vetted. It just was people who couldn’t – they were having a hard time."

The US advertised details of the hotline in a tweet published by the US embassy in Syria on Saturday. The tweet was also published in Arabic.

US officials have admitted problems with understanding and transcribing the Arabic language in the past.

The US military initially denied carrying out an air strike on the Syrian town of Atmeh last August following complaints of civilian casualties, but later admitted the strike, citing confusion over the spelling of the town's name.

A partial ceasefire between some opposition rebels and pro-government forces, the first in Syria's almost five-year civil war, came into effect on Saturday, but there have already been many reports of violations.

The United States, Russia and countries in the International Syria Support Group have set up a network of monitoring centres to probe the reports.

The White House said Wednesday it was "concerned" about claims that Syrian President Bashar al-Assad's government is again bombarding civilians with tank and artillery fire.

Toner said there had been an "undeniable" overall reduction in air strikes on Syrian opposition and civilians since the ceasefire started but added: "We are concerned about reports of Syrian regime tank and artillery attacks against civilians near Latakia, near Homs, and Hama, as well as around Damascus."

"So we are looking into each of these allegations and each of these reports very closely, sharing them among other members of the ISSG, including Russia and Iran – Russia, rather – and strongly urging all parties to continue to practice restraint."

He said the US was also aware of unconfirmed reports that pro-government forces had used chemical weapons since the ceasefire came into effect. 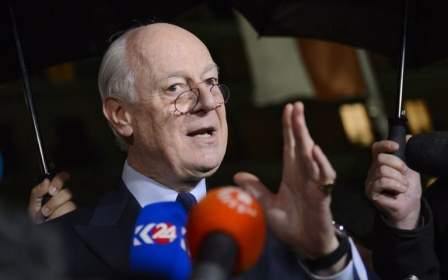