US and Saudi agree to arms deals worth almost $110bn Washington has agreed to arms deals with Saudi Arabia worth almost $110bn on Saturday, the first day of President Donald Trump's visit to the traditional US ally, with options for as much as $350bn over 10 years.

Trump hailed the $110bn deal for Saudi purchases of US defence equipment and services, which was reached during meetings in Riyadh.

"That was a tremendous day. Tremendous investments in the United States," Trump said at talks with Saudi King Salman.

"Hundreds of billions of dollars of investments into the United States and jobs, jobs, jobs."

Trump was in Riyadh on his first foreign trip since becoming president, an eight-day tour that will also take the US president to Jerusalem, the Vatican and meetings with leaders in Europe.

"The package of defence equipment and services supports the long-term security of Saudi Arabia and the entire Gulf region," Tillerson told reporters in Riyadh.

This is "in particular in the face of malign Iranian influence and Iranian-related threats which exist on Saudi Arabia's borders on all sides," he said.

White House spokesman Sean Spicer said on Twitter that the defence agreement was the "largest single arms deal in US history," and said other deals amounted to $250bn in commercial investment.

The US State Department said on Saturday that the sales fall into five categories: border security and counterterrorism, maritime and coastal security, air force modernization, air and missile defense, and cybersecurity and communications upgrades.

That will include bolstering the kingdom's capacity with "aerostats, tanks, artillery, counter-mortar radars, armored personnel carriers, helicopters, and associated training," according to the statement.

The State Department said the sales show the US' commitment to protecting its ally, while bolstering US companies in the region and "potentially supporting tens of thousands of new jobs" in the US.

Saudi Foreign Minister Adel al-Jubeir said the total value of the deals was "in excess of $380bn," and included Saudi investments in American infrastructure.

The Saudi Public Investment Fund (PIF) and US asset management firm Blackstone said on Saturday they were launching a $40bn investment vehicle to finance infrastructure renovation in the US, $20bn of which will come from PIF.

"Blackstone expects to invest in more than $100 billion of infrastructure projects, principally" in the US, the group said in a statement.

A preliminary deal worth $6bn to assemble 150 Lockheed Martin Blackhawk helicopters in Saudi Arabia was separately announced at the Saudi-US CEO Forum held in Riyadh during Trump's visit.

The programme to "support the final assembly and completion of an estimated 150 S-70 Black Hawk utility helicopters" will support around 450 jobs in the kingdom, said a forum statement.

US defence contractors are major suppliers of weapons to Saudi Arabia, which for more than two years has led a coalition conducting air strikes and other operations against rebels in Yemen.

The new deals come despite mounting pressure on Washington from rights groups to stop arms sales to Riyadh, which has come under repeated criticism over civilian casualties in Yemen.

Saudi Arabia on Thursday announced the creation of a new military industries firm as part of the kingdom's efforts to boost defence production.

With delicate diplomatic meetings facing him, including three summits, Trump faces a challenge of advancing his "America First" agenda without alienating key allies during his first trip abroad.

Stepping off Air Force One in sweltering heat with his wife, Melania, Trump and his entourage received a red-carpet welcome from Saudi King Salman.

The trip has been billed by the White House as a chance to visit places sacred to three of the world's major religions while giving Trump time to meet with Arab, Israeli and European leaders.

Uproar in Washington threatened to cast a long shadow over the trip. His firing of Comey and the appointment of a special counsel to investigate his campaign's ties to Russia last year has triggered a stream of bad headlines.

The New York Times reported Trump had called Comey a "nut job" in a private meeting last week in the Oval Office with Russian Foreign Minister Sergei Lavrov and US Ambassador to the United States Sergei Kislyak.

Getting ready for my big foreign trip. Will be strongly protecting American interests - that's what I like to do!

The White House did not deny the report, but said the "the real story is that our national security has been undermined by the leaking of private and highly classified conversations".

Trump and King Salman seemed at ease with each other, chatting through an interpreter. Walking with a cane, the king greeted Trump on the tarmac. A military brass band played, cannons boomed and seven Saudi jets flew over in V-formation, trailing red, white and blue smoke.

The two leaders sat side by side at the VIP section of the airport terminal and drank cups of Arabic coffee.

"Do you spend a lot of time in New York?" Trump was overheard asking the king.

On the drive to the Ritz hotel where Trump is staying, King Salman rode with the president in the heavily armored presidential limousine nicknamed "the Beast".

We welcome @POTUS Trump to KSA. Mr. President, your visit will strengthen our strategic cooperation, lead to global security and stability.

Trump is expected to give a speech on Islam and the need to tackle "radical ideology" on Sunday.

National Security Advisor HR McMaster said in a press briefing that Trump "will deliver an inspiring yet direct speech on the need to confront radical ideology" and that he would share his hopes for a "peaceful vision of Islam". He also presented a detailed itinerary of the "historic" trip.

"The speech is intended to unite the broader Muslim world against common enemies of all civilization and to demonstrate America's commitment to our Muslim partners," McMaster added.

The inclusion of such a speech has echoes of then-president Barack Obama's landmark speech at Cairo University on his visit to Egypt in 2009, where he also spoke of extremism and of tensions within communities.

Shortly after taking office, Trump had sought to block people from several Muslim-majority nations from entering the United States, but the travel ban has been blocked by federal courts.

The 70-year-old president's travel to Saudi Arabia, Israel, Italy and Belgium will be Trump's longest time away from the White House since he took office four months ago. Even his hand gestures were likely to draw scrutiny in the Middle East, where the thumbs-up sign, a signature move of Trump's, is considered taboo.

The uproar over Comey's firing looked unlikely to go away.

"It's almost always true that when a president goes on a big foreign trip, especially one that has some important summits ... that that dominates the news and knocks most other stuff out," said Republican strategist Charlie Black.

Trump, who has expressed a desire for friendlier relations with Moscow, drew a storm of criticism this week when it emerged that he had shared sensitive national security information with Russia's foreign minister during a meeting last week in the White House.

The president was already under attack for firing Comey in the midst of an FBI probe into Russia's role in the 2016 election and possible collusion with Trump campaign members.

Moscow has denied any such interference. Trump has denied collusion and denounced the appointment of a special counsel as a witch hunt.

His fellow Republicans in Congress have expressed frustration that Trump's pro-business economic agenda, featuring a plan to cut corporate and individual taxes, has been pushed to the backburner by the turmoil. 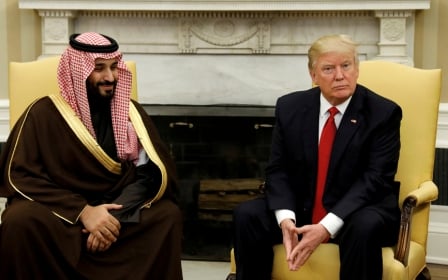 Diplomacy
ANALYSIS: What Trump can learn from previous US presidents' Mideast visits