US court orders Syria to pay $302.5m over death of reporter Colvin 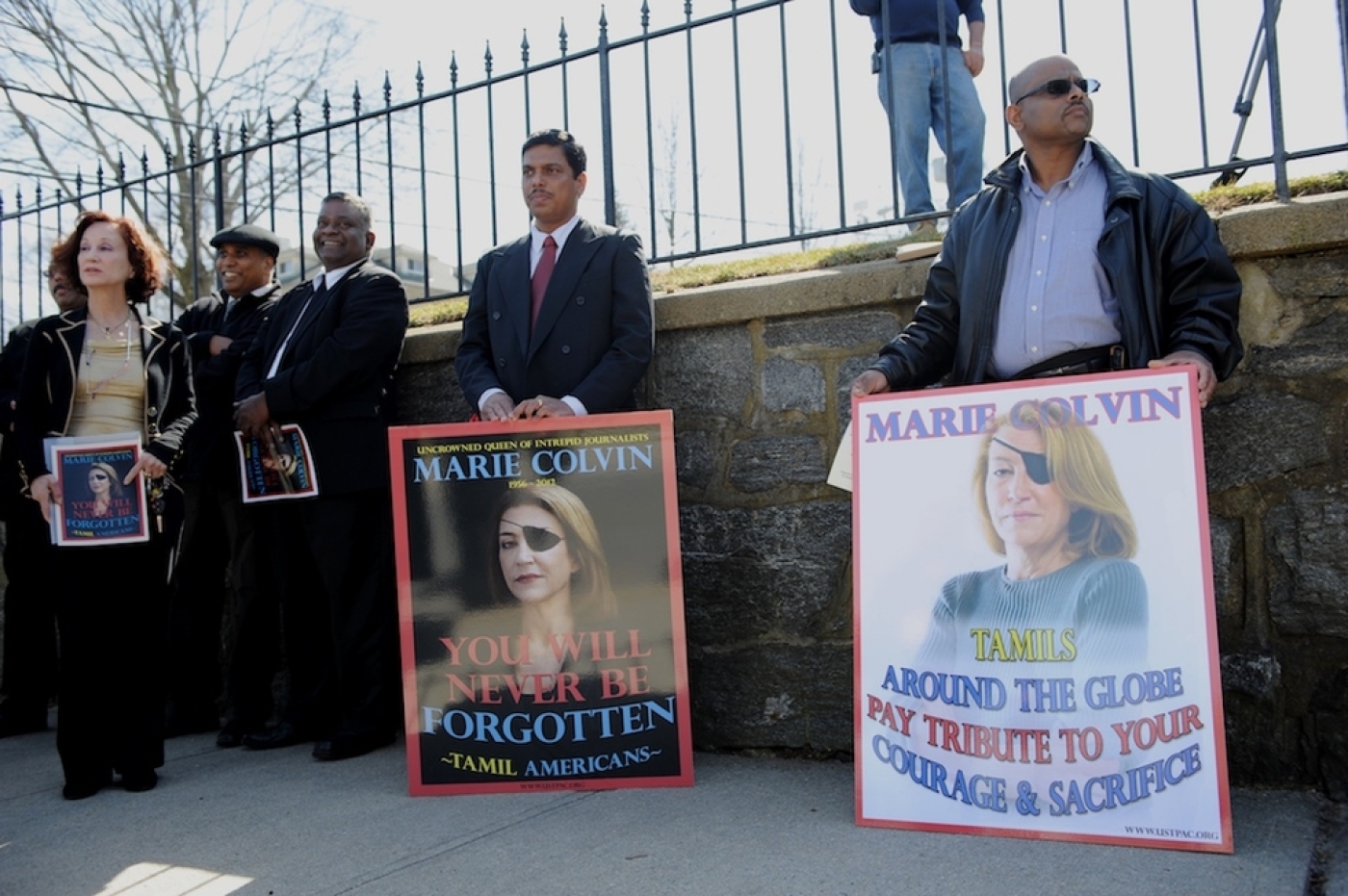 Members of the Tamil American community hold signs of support after the funeral of slain Times correspondent Marie Colvin, at St. Dominic's Catholic Church in New York (AFP)
By
MEE and agencies

A US court has found the Syrian government culpable in the 2012 death of journalist Marie Colvin, ordering a $302.5m judgment for what it called an "unconscionable" attack that targeted journalists.

Colvin - a renowned war correspondent whose harrowing career was celebrated in the recent Golden Globe-nominated film "A Private War" - was killed in the Syrian army's deliberate shelling of the Baba Amr Media Center in Homs on 22 February 2012.

According to the judgment delivered late Wednesday, Syrian military and intelligence tracked the broadcasts of Colvin and other journalists covering the siege of Homs to the media center.

They then targeted it in an artillery barrage that killed Colvin and French photographer Remi Ochlik.

The federal court in the US capital cited the testimony of a former Syrian intelligence officer who was given the name "Ulysses," who said that after the attack, Syrian officers celebrated the news that Colvin had been killed.

Judge Amy Berman Jackson ruled in favor of the complaint by members of Colvin's family that her death was an extrajudicial killing in violation of the Foreign Sovereign Immunities Act.

"Marie Colvin was a journalist who was killed by the Syrian government while reporting on the atrocities occurring during civil war," Jackson wrote.

"She was specifically targeted because of her profession, for the purpose of silencing those reporting on the growing opposition movement in the country."

'It is my greatest hope that the court’s ruling will lead to other criminal prosecutions, and serve as a deterrent against future attacks on the press and on civilians'

“By perpetrating a directed attack against the media centre, Syria intended to intimidate journalists, inhibit newsgathering and the dissemination of information, and suppress dissent."

Cathleen Colvin, who brought the lawsuit with her three children, said: "It's been almost seven years since my sister was killed by the Assad Regime, and not a day goes by when I don't think of her."

“It is my greatest hope that the court’s ruling will lead to other criminal prosecutions, and serve as a deterrent against future attacks on the press and on civilians," she added

"Marie dedicated her life to fighting for justice on behalf of the victims of war and ensuring that their stories were heard."

Colvin, who was 56 and working for the Sunday Times when she died, was known for her fearless reporting and signature black eye patch - the consequence of losing sight in one eye in an explosion during Sri Lanka's civil war.

Actress Rosamund Pike played her in Matthew Heineman's feature film "A Private War," which was released in November to critical acclaim.