The US military carried out "defensive strikes" in Iraq and Syria against the Kataib Hezbollah militia group, the Pentagon said on Sunday, two days after a US civilian contractor was killed in a rocket attack on an Iraqi military base.

The Pentagon said it targeted three locations of the Iranian-backed Shia militia group in Iraq and two in Syria, according to Reuters. The locations included weapons storage facilities and command and control locations the group had used to plan and execute attacks on coalition forces, it said.

The United States had accused the group of the 30-plus rocket attack on Friday that killed the US civilian contractor and wounded four US service members and two members of the Iraqi Security Forces near the oil-rich city of Kirkuk. Repeated mortar and rocket attacks have since late October targeted American interests in the country, where the US has 5,200 troops deployed as part of the international coalition against the Islamic State (IS) group, AFP said. Iraqi security and militia sources said at least 25 militia fighters were killed and at least 55 wounded by the three US air strikes in Iraq on Sunday.

MEE had reported in September that Iraq Prime Minister Adel Abdul Mahdi, who has since resigned, had been desperately attempting to prevent his country from being used as a battleground in a proxy war between the US and Iran.

Earlier this year, the US military signalled its intention to him to strike an air field held by Iraqi Hezbollah after drone strikes on oil facilities in the Gulf.

Abdul Mahdi was reported by witnesses to the exchange to have told the Americans that he could not stop them striking wherever they wanted, but neither could he prevent retaliatory strikes by Iran-backed militias on US troops and bases in Iraq.

In August, Abdul Mahdi came under pressure to publicly accuse Israel of launching drones to attack targets on Iraqi territory.

“Our Prime Minister Adel Abdul Mahdi is between the rock and a hard place,” an Iraqi intelligence source told MEE at the time. The prime minister’s pleas seemed to be in vain. “Neither side is listening,” the Iraqi source said.

Iraq's parliament accepted the resignation of Abdul Mahdi, after just over a year as prime minister, on 1 December amid street protests against government corruption.

Earlier this month, US Secretary of State Mike Pompeo blamed Iran-backed forces for a series of attacks on bases in Iraq and warned Iran that any attacks by Tehran or proxies that harmed Americans or allies would be "answered with a decisive US response".

On 16 December, US Secretary of Defence Mark Esper called on Iraqi authorities to prevent attacks on military bases housing US troops. On Sunday, Esper said the air strikes in Iraq and Syria had succeeded, and he did not rule out additional action "as necessary".

A US source told AFP that pro-Iran factions in Iraq are now considered a more significant threat to American soldiers than IS, whose sweeping offensive in 2014 saw Washington deploy thousands of troops to the country. 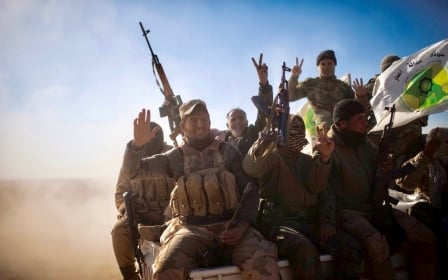