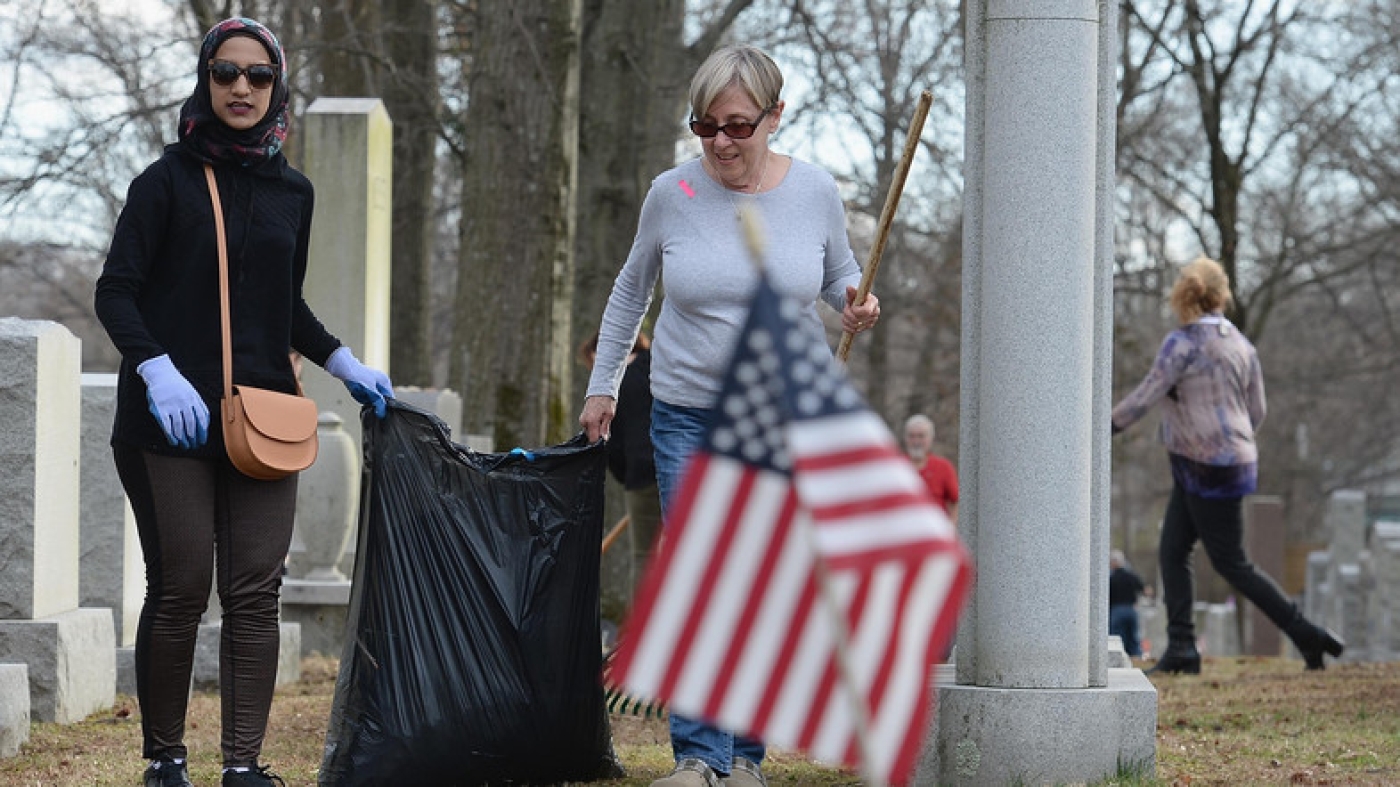 Volunteers clear up the mess after an attack on the Chessed Shel Emeth cemetery in St. Louis in late February 2017. US Muslims raised thousands of dollars to help pay for repairs. (Reuters)
By
Nadine Dahan

A single tweet by an American Muslim marine who offered to stand guard at Jewish cemeteries following a wave of anti-Semitic attacks has sparked a wave of similar offers of solidarity on social media.

I'm a #MuslimMarine in Chicagoland area. If your synagogue or Jewish cemetery needs someone to stand guard, count me in. Islam requires it.

The offer by Tayyib Rashid, who calls himself "The Muslim Marine" on Twitter, followed a series of attacks against Jewish cemeteries and threats against synagogues, which some have linked to the embolding of far right movements since Donald Trump was elected president.

In the weeks following Trump’s inauguration, Jewish Community Centres (JCC) in the United States reported a spike in the number of anti-Semitic attacks and harassment across the country.

A number of Jewish organisations have also claimed that Trump has not been vocal enough in condemning anti-Semitism.

Now, American Muslims on Twitter are offering to stand guard over Jewish sites in solidarity, and to help prevent further attacks. Rashid started off the stream of offers on social media, and received hordes of support for his "kindness".

I'm a Muslim in #Harrisburg. If your synagogue or community center needs someone 2 stand guard, I will stand guard 4 you. Islam requires it.

Muslim veterans offer to guard Jewish sites in America: 'Count me in' https://t.co/c8ZIHrWB15

@JonathanLanday @Independent this is the spirit that built America and keeps it strong.

Many US Muslims posted their locations, offering to go to local Jewish cemeteries.

Hope they don't need us but we will be available in Detroit area as needed.https://t.co/3QJBX17Pro https://t.co/ZVyTBWCywH

I will stand guard for my Jewish brothers & sisters

Others applauded the tweets and their message of unity.

The best of #America: Muslim veterans offer to guard Jewish sites across US https://t.co/nfisGwTb7V #jewishcemetery

And many were moved by this heartfelt show of solidarity.

Jewish Twitter users also appreciated the tweets and some, including this user, offered the same support in return.

likewise. This Jewish girl will do anything I can to protect my Muslim brothers and sisters. #unite #resist

But this isn't the first time American Muslims and Jews have united against racist attacks.

The latest offers of solidarity comes after US Muslims set up a fund earlier this year to raise money for Jewish cemeteries that had been vandalised, and within a week, raised almost $140,000.