US in new diplomatic push over conflicts in Syria, Palestine

Kerry is planning to meet with Russian, Saudi, Turkish, Palestinian and Israeli leaders in the coming days in bid to resolve Middle East conflicts The US is working to avoid the 'total destruction' of Syria, says secretary of State John Kerry (AA)
By
MEE and agencies

The United States is working to avoid the "total destruction" of Syria, and plans a meeting in the coming days with Russian, Saudi and Turkish leaders to seek an end to the conflict, Secretary of State John Kerry said on Monday.

Washington considers that it bears the responsibility "to try and avoid the complete and total destruction of Syria", fearing the potential fallout across the region and a possible surge in refugees, Kerry said on a stop in Madrid.

Kerry also called for an end to Israeli-Palestinian violence, adding that "Israel has every right in the world to protect itself".

"We want to see calm restored and we want to see violence stop," Kerry said, while confirming that he would meet in the coming days with Prime Minister Benjamin Netanyahu and Palestinian Authority President Mahmud Abbas. Syria War
Kerry: Assad must go, but when is negotiable 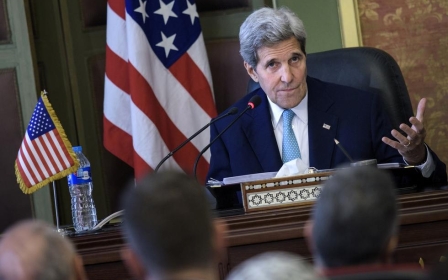