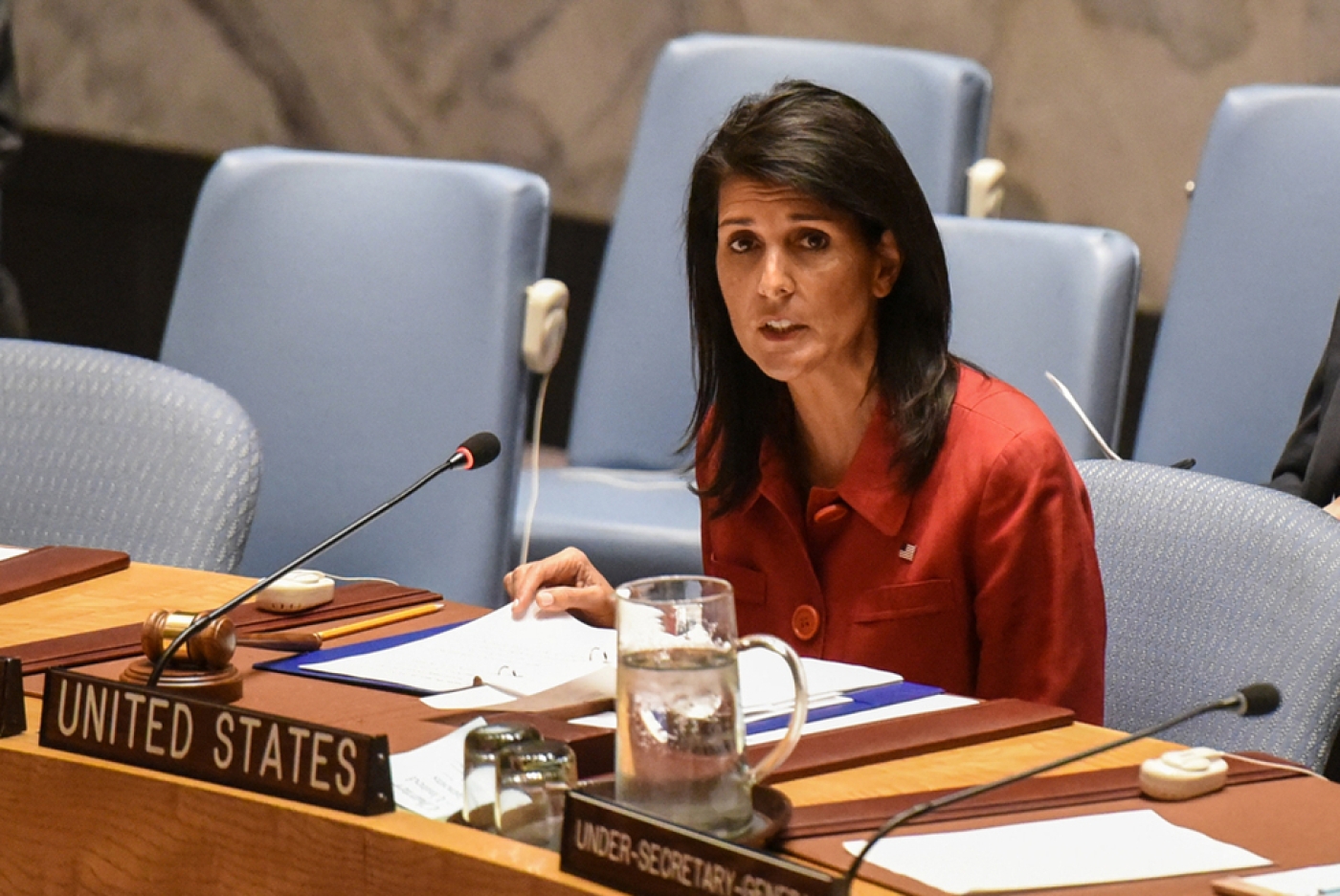 The United States on Monday warned it was ready to act in Syria if needed to end chemical attacks and "inhuman suffering" as it pushed for a new 30-day ceasefire in Eastern Ghouta.

US Ambassador Nikki Haley told the UN Security Council that a ceasefire approved two weeks ago "has failed" and circulated a new draft resolution calling for a 30-day truce in the rebel enclave and Damascus.

"This is no ceasefire. This is the Assad regime, Iran, and Russia continuing to wage war against their political opponents," Haley said.

The US ambassador recalled that President Donald Trump had ordered missile strikes on a Syrian air base in April last year in retaliation for a sarin gas attack blamed on President Bashar al-Assad's forces.

"We also warn any nation that is determined to impose its will through chemical attacks and inhuman suffering, most especially the outlaw Syrian regime: the United States remains prepared to act if we must," Haley said.

"It is not the path we prefer, but it is a path we have demonstrated we will take, and we are prepared to take again," Haley said.

"When the international community consistently fails to act, there are times when states are compelled to take their own action."

The US-drafted text seen by AFP would decide on a 30-day cessation of hostilities throughout Eastern Ghouta and Damascus City to begin immediately upon adoption.

A Syrian opposition representative told the council at a separate meeting that military action was a feasible option to stop the violence and force the Syrian government to the negotiating table.

Hadi al-Bahra, of the Syrian negotiation commission, said "the threat, and if necessary use of limited military action" was necessary to deter violations of the ceasefire.

On Monday, Syrian forces pounded two rebel towns in Eastern Ghouta, pressing on with a Russia-backed offensive that has so far allowed government fighters to retake nearly 60 percent of the enclave.

At least 1,162 civilians have been killed, including 241 children in the nearly month-long offensive, according to the Syrian Observatory for Human Rights.

More than 1,000 people, including many children, are in urgent need of evacuation, according to the United Nations.

Russian Ambassador Vassily Nebenzia hit back at the United States and its allies for "doing nothing but constantly blaming the Syrian regime and putting demands on Russia."

"The government of Syria has every right to try to remove the threat to the safety of its citizens," the Russian ambassador said.

"The suburbs of Damascus cannot remain a hotbed of terrorism."

The ceasefire resolution was never intended to put in place an immediate truce, he said.

"What we are talking about is a preliminary agreement among the parties as a preconditon for sustained de-escalation in all difficult areas of Syria, not only Eastern Ghouta," he said.

UN Secretary-General Antonio Guterres told the council that air strikes, shelling and ground offensives had intensified in Eastern Ghouta since the ceasefire resolution was adopted on February 24.

French Ambassador Francois Delattre piled pressure on Russia to halt operations and push the Syrian government to end its offensive, saying "Russia can stop the bloodbath."

"We all know that Russia has not been able or willing to stop this military offensive yet," he told reporters ahead of the meeting.