US quits UN Human Rights Council over 'bias against Israel' The United States withdrew from the United Nations Human Rights Council on Tuesday accusing it of  "chronic bias against Israel," a move that activists warned would make advancing human rights globally even more difficult.

US ambassador to the UN Nikki Haley slammed Russia, China, Cuba and Egypt for thwarting US efforts to alter the council. She also criticised countries which she said shared US values and encouraged Washington to remain but "were unwilling to seriously challenge the status quo".

The United States is half-way through a three-year term on the main UN rights body. The Trump administration had long threatened to quit if the 47-member Geneva-based body was not overhauled.

Standing with US Secretary of State Mike Pompeo, Haley said the "disproportionate focus and unending hostility toward Israel is clear proof that the council is motivated by political bias, not by human rights".

"Disappointing, if not really surprising, news. Given the state of #HumanRights in today's world, the US should be stepping up, not stepping back" -- UN Human Rights Chief #Zeid following USA decision to withdraw from U.N. Human Rights Council.#StandUp4HumanRights

Washington's withdrawal is the latest US rejection of multilateral engagement after it pulled out of the Paris climate agreement and the 2015 Iran nuclear deal.

It also comes as the United States faces intense criticism for detaining children separated from their immigrant parents at the US-Mexico border. UN High Commissioner for Human Rights Zeid Raad al-Hussein on Monday called on Washington to halt its "unconscionable" policy.

Diplomats have said the US withdrawal from the body could bolster countries such as Cuba, Russia, Egypt and Pakistan, which resist what they see as UN interference in sovereign issues.

US withdrawal from UN Human Rights Council is another example of how unconditional support for Israel means you can’t support human rights standards anywhere for anyone. Israel threatens entire international system for defending human rights, such as it is.

Among changes the United States had been seeking was to make it easier to kick out member state with egregious rights records.

Haley said the US withdrawal from the Human Rights Council "is not a retreat from our human rights commitments".

Twelve rights and aids groups, including Human Rights First, Save the Children and CARE, wrote Pompeo to warn the withdrawal would "make it more difficult to advance human rights priorities and aid victims of abuse around the world".

"The US's absence will only compound the council's weaknesses," they wrote.

The Trump administration’s withdrawal from the UN Human Rights Council, coupled with its abusive use of power at home, only confirms what we’ve always known — Trump is leading a concerted, aggressive effort to violate basic human rights of those most in need of protection. https://t.co/7eDtDQfQV5

Jewish rights group the Simon Wiesenthal Center applauded the US withdrawal and urged other countries to do the same.

The council meets three times a year to examine human rights violations worldwide. It has mandated independent investigators to look at situations including Syria, North Korea, Myanmar and South Sudan. Its resolutions are not legally binding but carry moral authority.

Washington has found itself at odds with allies and foes alike over its unconditional support for Israel. Last week, the US was one of eight nations that voted against a resolution at the UN General Assembly to condemn Israel's lethal force against peaceful Palestinian protesters. The assembly adopted the resolution with 120 votes in favour.

Israel thanks President Trump, Secretary Pompeo and Ambassador Haley for their courageous decision against the hypocrisy and the lies of the so-called UN Human Rights Council.

"For years, the UNHRC has proven to be a biased, hostile, anti-Israel organisation that has betrayed its mission of protecting human rights," Netanyahu said in a statement.

Hatem Abudayyeh, the co-founder of the US Palestinian Community Network (USPCN), said the US withdrawal from the UN council demonstrates Israel's increasing isolation at the world stage.

Abudayyeh said while previous presidents have not paid "much attention" to the UN and other international institutions, the Trump administration "clearly, openly says that it doesn't care about international law".

"We've been saying this for many years: that Israel is becoming isolated; Israel is being seen - even in the United States finally - as the criminal, racist apartheid state that it is," Abudayyeh told MEE. 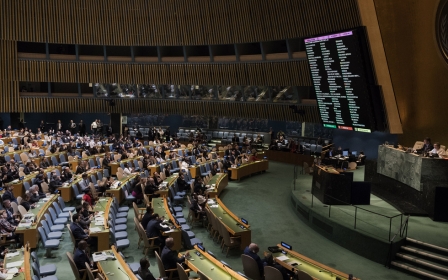 Palestine state
For Palestinians, Trumpism may come with a silver lining
Nada Elia