The United States is ready to help organize new elections in Libya in hopes of ushering in a more stable government, US officials said Wednesday amid growing concern at the political turmoil.

Libya's electoral commission said Tuesday that polls will take place on June 25 to replace its disputed interim parliament, according to the LANA state news agency.

US Ambassador to Libya Deborah Jones said during a visit to Washington that resolving the country's political fragmentation was going to take hard work and she was trying to reach out to "all influences in society and that can include spoilers as well as" more positive players.

Rival militias are blamed for growing unrest in the North African country since the 2011 NATO-backed uprising that killed dictator Muammar Gaddafi.

Jones told the Stimson Center think-tank that the US and its international partners were focused on trying to foster political dialogue.

"One of the reasons that all of the programs that we and the international community have been engaged in in the three years following the revolution have failed to gain significant traction is because there are underlying disagreements and disputes within a very ununified and weak government which is in a continual battle with the General National Council," Jones said.

US ambassador to Libya would not 'condemn' Haftar

She stressed the US had not been forewarned of the actions of renegade general Khalifa Haftar, whom Libyan authorities branded an "outlaw" after he launched a Friday assault on Islamists in Benghazi.

Jones said she "personally... would not come out and condemn" his efforts in going after groups blacklisted by the US as terrorist organizations, despite Washington's disapproval of the violence used to achieve that goal.

Haftar is now one of the many political forces that need to join the dialogue.

"What he has declared is that he wants the GNC to step aside because the GNC has thus far failed to take any action to respond to the unhappiness of many Libyans that it has outstayed its time, and there's no forcing mechanism to compel it to leave," Jones said.

She also admitted that following the militant assault on a US mission in eastern Benghazi in 2012 that left four Americans dead, including her predecessor Chris Stevens, security for her "small but lean team" was tight.

"Benghazi will not happen again... but something else will.

"It's a precarious environment," she added, stressing she managed to travel beyond the capital but only to the west of the country.

US Secretary of State John Kerry meanwhile spoke with Egyptian Foreign Minister Nabil Fahmy as well as his counterparts from Turkey and France about "the dire situation in Libya" and how the international community can help, Psaki said.

Meanwhile, Egypt's presidential frontrunner Abdel-Fattah al-Sisi Dubai-based Al-Arabiya television channel on Wednesday that he has a "a formula for restoring stability to Libya", declining to give further details. Libya Crisis
PM: 'Libyans don't want to be ruled by the military' 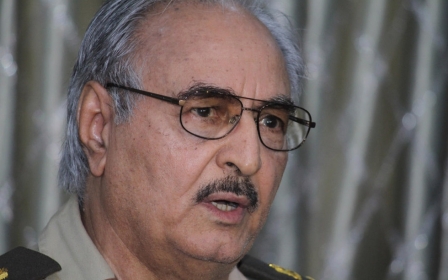