US says Syria elections 'a disgrace' as war rages on Buildings destroyed by a Syrian army attack in Aleppo, Syria on 3 June, 2014 (AA)
By
MEE and agencies

The United States on Tuesday denounced presidential elections in Syria as an attempt by Syrian leader Bashar Al-Assad to shore up his authority.

"Today's presidential election in Syria is a disgrace," State Department spokeswoman Marie Harf said. "Assad has no more credibility today than he did yesterday."

Voters turned out in government-controlled areas of Syria to vote in an election seen as certain to return long-standing leader Assad to office with a mandate to continue his battle against rebel forces.

At least 162,000 people have been killed in Syria since an uprising against Assad's rule erupted in March 2011, triggering a savage crackdown.

More than half the population have fled their homes, and extremist groups have flooded into Syria to take advantage of the power vacuum.

Washington blames the chaos on Assad's rule and has demanded he give way to a transitional government.

"Elections should be an opportunity for the people of a free society to be consulted and to play an important role in choosing their leaders," Harf said.

But Tuesday's elections had "intentionally denied millions of Syrians the right to vote," Harf said, adding the Syrian government "continues to massacre the very electorate it purports to represent and protect." 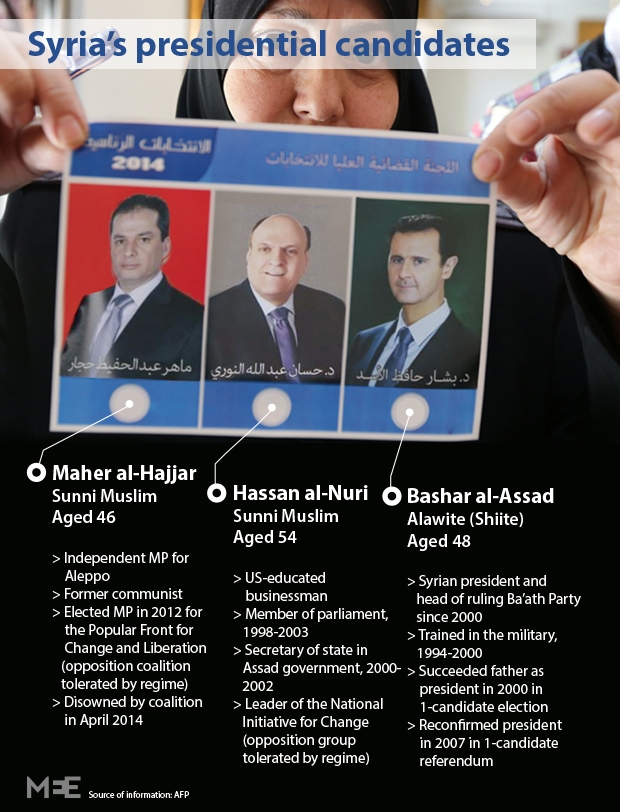 But in a swipe at the US administration, former US ambassador to Syria, Robert Ford, told CNN he had retired from his post in May as "I was no longer in a position where I felt I could defend the American policy."

He argued that that the US should have helped more the moderate rebel factions earlier.

"We have been unable to address either the root causes of the conflict in terms of the fighting on the ground and the balance on the ground, and we have a growing extremism threat," said Ford, who worked for almost three years with the Syrian opposition.

"There really is nothing we can point to that's been very successful in our policy except the removal of about 93 percent of some of Assad's chemical materials. But now he's using chlorine gas against his opponents."

Ford said the presidential poll "is a signal, to us, to other countries in the region, to Europe, et cetera, that Assad is not leaving. He is staying deeply entrenched in the capital in Syria, even as other parts of the country remain outside his control."

Asked about Ford's comments, Harf said he was now a "private citizen... entitled to his own views."

She agreed though that administration of President Barack Obama shared Ford's "frustration" at a situation in which she said was "there are no easy answers."

"When you have a brutal dictator who is willing and able to kill people, like he's killed, with chlorine, potentially, with chemical weapons, with barrel bombs, it's a really tough challenge," Harf said.

"We have a lot of tools at our disposal that we're using, but there is no solution that will happen overnight."

No voting in 60 percent of the country

Polls closed at midnight local time (2100 GMT) and vote counting began almost immediately with the result expected to be announced on Thursday, a source close to the government told AFP.

Assad faces two little-known challengers and is expected to win.

In Damascus, the atmosphere during voting was surreal, with people voting as the sound of shelling and explosions punctuated pro-Assad songs blaring in the streets.

Activists said violence raged on, with rebels raining mortar fire on government-controlled parts of the capital and the air force striking opposition areas.

There was no voting in the roughly 60 percent of the country outside government control, including large areas of second city Aleppo.

None of the voters questioned by AFP said they had voted for Assad's opponents.

Assad allies Iran, North Korea and Russia sent observers to monitor the election, but the opposition and NATO have both dubbed it a "farce".

The vote "does not fulfil international standards for free, fair and transparent elections and I am sure no (NATO) ally will recognise the outcome of these so-called elections," said the head of the military alliance, Anders Fogh Rasmussen.

The Syrian Observatory for Human Rights said security forces across the country "forced people to close their shops and to hang pictures of Assad on shop windows."

Observatory director Rami Abdel Rahman added: "Fear of the regime, and specifically the threat of detention for non-voters, is pushing people to vote."

The United Nations has warned the election will only complicate efforts to relaunch peace talks after two rounds of abortive negotiations in Switzerland.

The exiled opposition has made Assad's departure a precondition for any settlement, and his re-election for a third seven-year term is likely to scupper any hope of getting them back to the table any time soon.

"Dictators are not elected, they hold power by force and fear - the only motivations that Syrians have to show up for this charade," opposition chief Ahmed Jarba wrote in the Washington Post.

As he voted in Damascus, Foreign Minister Walid Muallem said "a political solution to the Syrian crisis begins today".

Noah Bonsey of the International Crisis Group said the election was part of a broader government effort to portray Assad's eventual victory as inevitable but that it was likely only to prolong an increasingly bloody war.

"The regime can only gain ground after reducing it to rubble, and can only hold it in so far as it remains empty of its original inhabitants," said Bonsey.

Meanwhile, at least 100 people, including 13 children and seven women, were killed on Tuesday in air and ground operations across Syria carried out by Assad’s forces, according to opposition activists.

35 people were killed in Aleppo, 28 in Damascus, 17 in Homs, eight in Idlib, five each in Deir ez-Zour and Hama, and two in Daraa, the London-based watchdog Syrian Network for Human Rights said.

According to the Syrian Local Coordination Committee, (LCC), numerous houses were demolished or damaged as army helicopters dropped barrel bombs on areas under opposition control in Daraya.

It was also reported that nearly 60 mortar shellings were found in the capital Damascus.