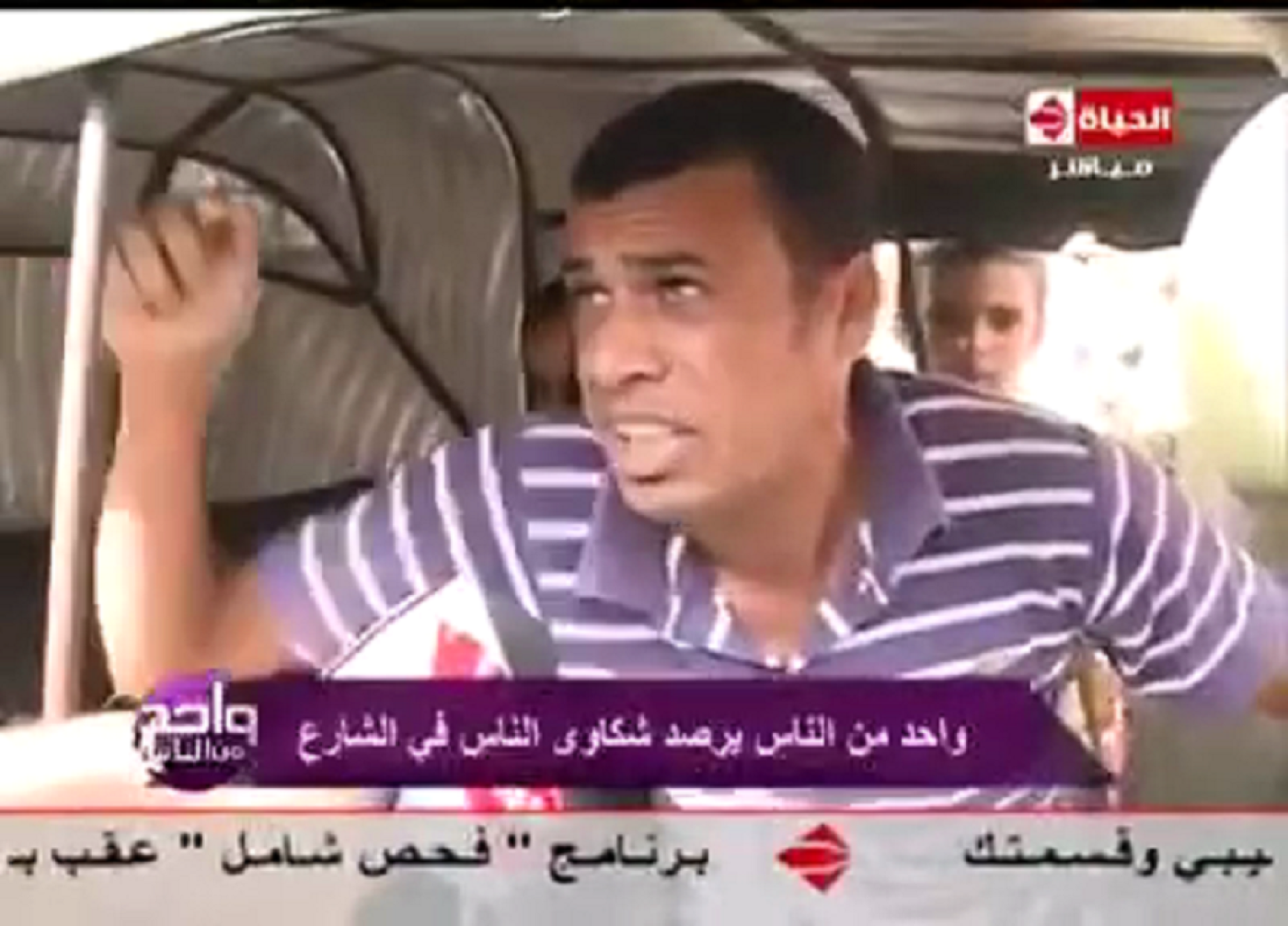 “What are your complaints?” This was the question that set off the biggest social media storm Egypt has seen since the 25 January revolution in 2011.

The interviewee was an unidentified, working class tuk-tuk driver, whose three-minute long response summed up the frustration and humiliation many Egyptians feel under the rule of military-backed President Abdel Fattah el-Sisi.

The video clip, aired on Wednesday evening, went viral within hours of its broadcast on Amr Ellissy's show "One of the People" on the satellite TV station al-Hayat. By Thursday, the short clip had garnered more than 4.5 million views on YouTube, and duplicates of it had tens of thousands more views on Facebook and Twitter.

The video was subsequently removed from the TV channel’s social media and YouTube pages, a move that came in the context of growing calls for mass protests on 11 November in a "revolution of the poor".

These factors turned the short video into a social media hurricane.

'Do not cut a word from what I say'

“A country that has a parliament, and has military and intelligence apparatus, both foreign and domestic, and has 20 ministries – how can its condition be like this?"

The driver was interviewed in a working-class district of Cairo as part of Ellissy's attempt to gauge the views of ordinary Egyptians on the state of the country.

“I swear to you, before elections took place for the presidency, we had enough sugar, we had rice and we were exporting it. What has happened? Where did it go? We want to understand," the driver said.

“We watch the television, we find Egypt is like Vienna. We go to the streets, we find out it’s like Somalia’s cousin," he said. "I swear to God, tell me what has happened and what is the solution.”

Translation: “We watch the television, we find Egypt is like Vienna. We go to the streets, we find out it’s like Somalia’s cousin #I_am_a_tuktuk_graduate"

And so began his impassioned assessment of Egypt’s woeful state that would take the country by storm.

The "people at the top" he was referring to were Egypt’s parliamentary deputies who have organised an extravagant event in the luxurious Egyptian resort town of Sharm el-Sheikh to celebrate the Egyptian parliament’s 150-year anniversary.

All of Egypt’s MPs will be in attendance, in addition to 400 Egyptian, Arab and foreign dignitaries, according to the state-run al-Ahram newspaper.

Translation: "We need to enroll the whole government in the tuk-tuk university, maybe then they will empathise with the people"

“Does this please God?” he asked in desperation. “God will bring these people on judgement day and say ‘Where are the kings of the world and their rulers, to whom belongs all sovereignty on this Day?’ because of the people who cannot find anything and the destitute people.”

He was quoting verse 16 of chapter 40 of the Qur’an, Surat al-Ghafir (the Forgiver): “The Day they come forth nothing concerning them will be concealed from Allah. To whom belongs (all) sovereignty this Day? To Allah, the One, the Prevailing.”

Translation: "I hope that you come to govern us and I swear you are a prince"

“And they come out on the television and they say Egypt is developing, Egypt is coming and going," he continued.

“And we keep throwing money in national projects that have no use, and our education system is wrecked to a level even worse that you can imagine."

Translation: "Egypt still has goodness in it because it has a lot of people like you who love it. Honestly, you are a source of pride role for every youth, and every Egyptian"

“How can I have, excuse me, a person who is not educated,” the tuk-tuk driver said before being cut off by a surprised Ellissy, who asks the driver: “What did you graduate?”

Translation: "Amr Ellissy: What did you graduate? Egyptian citizen: #I_am_a_tuktuk_graduate" The pictures contain quotes from the tuk-tuk driver.

It was the interviewee’s response to this question that led to the hashtag that took Egypt by storm.

“What?” The driver replied. “I’m a tuk-tuk graduate – let me just finish.”

And so the hashtag #I_am_a_tuktuk_graduate was born, but not before the ‘tuk-tuk graduate’ reeled off the litany of problems facing Egypt, as well as his personal solutions.

“How can I have, excuse me, a person who is not educated, and hungry, and is in ill-health, and give him national projects like these. He’s going to drive me into the wall.

“These are the three most important things for the country to develop: education, and health, and agriculture.

“This country, if the citizen has these three things, I swear to God, only God will be able to overcome it.”

Translation: "This man represents me"

At this point, the driver raises his voice, now trembling with emotion, as he speaks of his hurt national pride in an angry, desperate protest over Egypt’s decline since independence.

“From only 100 years ago, Japan came to study Egyptian development,” he lamented. “It’s unjust for Egypt to have this done to it.

“Egypt, whose monetary reserves were the biggest in the world, has reached such a state?”

Translation: "I swear to God, this man’s words really affected me and I really did cry about our situation"

He then turns to the issue that has decimated national pride in the country, that of Egypt’s relationship with their rich, petrodollar Gulf neighbours.

“Egypt, which had under its control Chad, and Sudan, and Saudi Arabia; these few little countries from the Gulf, are laughing at us and mocking us and ‘look what we’re giving and doing for you’ - and we gave them with pride 70 years ago the covering of the Kaaba that came out of Egypt.

Translation: "A video that would make a stone cry and make someone who doesn’t understand, understand"

As he comes to the end of his speech, he lets loose his utter disappointment in what he sees as a lack of patriotism amongst Egypt’s ruling classes.

“Is there nobody who cares about Egypt, or loves Egypt, to say no! This is unjust that a bunch of traders conned the people in the name of patriotism, and democracy, and social justice, and their actions are as far away as possible from democracy and justice.

Translation: "The icon of the new revolution. You said what we have all been unable to say"

At this point, people from the streets try to clamber into the tuk-tuk and vigorously nod with approval, before the driver makes one last, desperate appeal.

“I will broadcast every word you say,” the TV host replied, patting the driver on the shoulder and walking away shaking his head in disappointment.

Revolution of the poor

It proved to be an ominous request. The video was posted to Ellissy’s personal Facebook page, as well as al-Hayat’s Facebook and YouTube pages, and racked up millions of views.

The uploads were then taken down after the video had taken social media by storm. On both the presenter’s and TV channel’s Facebook pages, Egyptians commented on unrelated posts venting their anger that the video had been taken down.

Translation: "I used to respect this channel a lot but this was before you removed the tuk-tuk video. You are supporters of the regime but I want to tell you that the video has gone viral and you cannot erase it and you are the ones who have gone down in our view and only God is sufficient for us in the face of everybody who has a solution in their hands and doesn’t carry it out."

Translation: "Why did you delete the tuk-tuk video? Are you scared of the government or something, Ellissy? He said the truth, he found where it hurt and pressed too hard."

Egypt is ranked 159 out of 179 in Reporters Without Borders 2016 World Press Freedom Index, a ranking that was only reinforced when Ellissy confirmed that he received a phone call shortly after the video went viral from Tamer Ouf, the political adviser to Egyptian Prime Minister Sherif Ismail.

The TV presenter told the government adviser that his production team did not have any information about the tuk-tuk driver, or even his first name, as it was a random interview in the middle of the street and that the driver drove off immediately afterwards.

Ellissy added that he was told by Ouf that the government follows what is happening in the Egyptian street closely and that it recognises the importance of monitoring prices in the markets.

There has been a growing social media campaign in the country for mass anti-government protests on Friday 11 November. The event is being organised by a Facebook page called Revolution of the Poor.

On the many event pages for the 11 November protests, Egyptians have posted videos and pictures of the tuk-tuk driver, alongside the hashtag #I_am_a_tuktuk_graduate.

Translation of text in picture: “I am an Egyptian and I am taking to the streets on 11/11 because my country is drowning in a sea of injustices and those who commit injustice. Only God is sufficient for us.”