A leader of an Iraqi Christian militia reportedly threatened last week to “dispose of” Sunni Arab tribes in the northern town of Tel Kayf near the war-ravaged city of Mosul if they did not leave the area, according to the Middle East Monitor (MEMO).

In his speech Habba is also reported to have said that Christians’ homes and rights would no longer be usurped, which he alleged had occurred following the US-led invasion that ousted former President Saddam Hussein in 2003.

“In a democratic system, no city, town or village is closed off to any citizen, no matter their background. Apart from the fact that Sunni Arab tribes have been in and around Mosul for over a thousand years, no one should be able to dictate who lives where. I’m not surprised [Habba] has turned to sectarianism considering the company he keeps within the Hashd Al-Sha’abi [PMU]," Ahmad Al-Mahmoud, an analyst at the London-based Iraq monitoring organisation Foreign Relations Bureau of Iraq, told MEMO.

Also speaking to MEMO was Sabah Al-Mukhtar, head of the UK-based Arab Lawyers Network and a legal expert, who said that Habba's comments amount to "threatening genocide."

“He is threatening [the Sunni tribes] not because of what they have done, but because of who they are. That is the definition of genocide from a legal perspective," Al-Mukhtar argued.

Christian communities in Iraq have already distanced themselves from armed Christian militias, recognising that their actions could endanger their fragile peaceful coexistence with Iraq’s other religious communities.

In a statement released last year, the Patriarchate of the Chaldean Church stated that they have “no near or far relations with the Babylonian Brigades [a Christian militia] or any other armed Christian factions," according to MEMO. 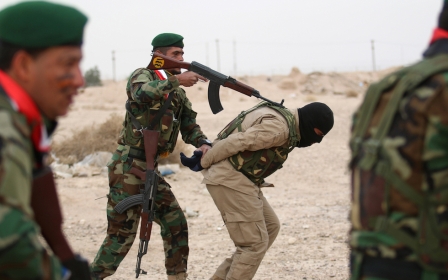