A video emerged on Saturday appearing to show the aftermath of a shooting in the occupied West Bank city of Hebron.

The footage shows an armed Israeli settler standing over the dead body of Fadel al Qawasmeh, an 18-year-old Palestinian from Hebron.

Israeli soldiers rushed onto the scene. They did not arrest the settler. They surrounded the Palestinian teen's body.

A Palestinian activist in Hebron told Middle East Eye that Qawasmeh was shot after being allowed by soldiers to pass through a checkpoint entering Shehada Street in Hebron's divided old city.

"The settlers feel confident that they have a free pass to kill Palestinians here," said Hashim Alazzah. "We have asked the soldiers to help stop the settlers but they said its not their role and that we should leave the city."

Qawasmeh was the 38th Palestinian to be killed in October, amid a wave of new unrest across Israel and Palestine. 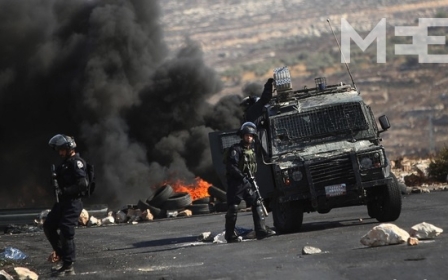