WATCH: Inside operations room of battle against IS in southern Syria

Middle East Eye gains exclusive access to rebel coalition, including Free Syrian Army and Army of Conquest, leading fight against IS in Daraa Middle East Eye gained exclusive access to the operations room where the battle against Islamic State (IS) militants in Daraa, southwestern Syria, is being coordinated.

This joint operations room includes all factions of a wide coalition of the Free Syrian Army's Southern Front and representatives of the Army of Conquest, which includes both Ahrar al-Sham and the Nusra Front, al-Qaeda's affiliate in Syria.

A Southern Front commander tells the assembled factions: "The Southern Front are the ones leading this fight and coordinating all the factions. Whoever is here to just fight for himself and not for our just cause can leave now.

"We must all fight together as one front."

The willingness of the Southern Front to cooperate with a group that includes Nusra fighters among its numbers appears to mark a softening of its stance towards a group that it last year publicly ruled out working with.

But Daraa is a long way from Nusra's stronghold in northern Syria, and sources told MEE that only a few of its fighters are present on the ground there and were therefore tolerated alongside others affiliated with the Army of Conquest, although they were not invited into the operations room.

Following the cessation of hostilities with government forces in late February, on 21 March, IS fighters and allied militias unleashed a major offensive in Daraa province, storming the towns of Tseel, Sahem Golan, Adwan, Tira, Sheikh Saad and Jileen.

The fighters staged public executions as they seized control, raising the black flag associated with IS and enforcing its strict ideology.

The Southern Front and the Army of Conquest mobilised in response and after more than a week of heavy fighting, they began to push the attackers back. In April, they regained control of each of the seized towns, eventually pushing the militants back into the Yarmouk basin.

Today, discussions are underway about coordinating efforts to fight IS and affiliated groups in the area.

Local activists said fighting between warring factions in western Daraa left behind dozens of dead and wounded civilians, including women and children. Over two months of clashes, residential areas were damaged by random missiles and heavy machine-gun fire.

After years of heavy fighting between Syrian government forces and opposition groups, the cessation of hostilities brokered in late February brought some respite for residents of Daraa, from near-constant battle to relative calm, and for the Free Syrian Army opposition, it has meant a change from fighting government troops to battling IS.

For civilians, the extended truce, a quiet broken only occasionally by shelling or barrel bombing, marks a welcome relief.

"We hope that the truce lasts in Syria. We are tired of war, killing and destruction," said Abu Jassim, a 43-year-old man who sells fruit and vegetables from a cart in Sida, in eastern Daraa province.

According to the Office of Documentation of the Martyrs of Daraa (ODMD), about 40 civilians were killed during the three-month truce in Daraa. Before the truce, it was not unusual for double that number to be killed in a month.

"Two full months after the truce was declared by the United Nations on 27 February 2016, the death toll dropped dramatically. In Daraa, the number of civilian dead was just 29 people from 27 February through 27 April," Abu Giyas Shara of the ODMD said.

"The absence of warplanes and helicopters is probably the main factor in the decline in the number of victims. Most of the people slain during the ceasefire were killed by artillery and missiles, mainly in Daraa city. If you compare Daraa province to the rest of Syria, there are fewer dead here since the ceasefire began because it has worked here. For the most part, Daraa province is calm," he told MEE.

Abu Jassim, the fruit and vegetable seller, agreed. "I was able to breathe again after the truce took effect. Life has started again here, despite the harsh conditions, and people have returned to the markets and shops."

But despite the ceasefire, battles between the rebel coalition and IS continue to rage.

Among those killed in recent clashes was a senior commander of the IS-allied Muthanna movement, Abu Omar Sawayq, who died on Sunday.

According to civilian activists living under IS control in the Yarmouk district, "an explosion of an improvised explosive device (IED) in the town of Shejerah in the countryside west of Daraa and under the control of Daash last Sunday led to the death of Muthanna second commander Abu Omar and his son and a number of others from the movement."

The same activists said Abu Omar Sawayq was primarily responsible for the assassinations that have taken place lately in Daraa province, including the killing of Sheikh Osama Yateem, president of the House of Justice Court in Daraa.

The Yarmouk Martyrs are accused of having declared an oath of allegiance to IS more than a year and a half ago. They control several villages in the Wadi Al-Yarmouk area in the countryside of western Daraa. 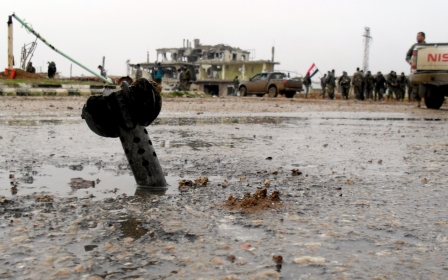