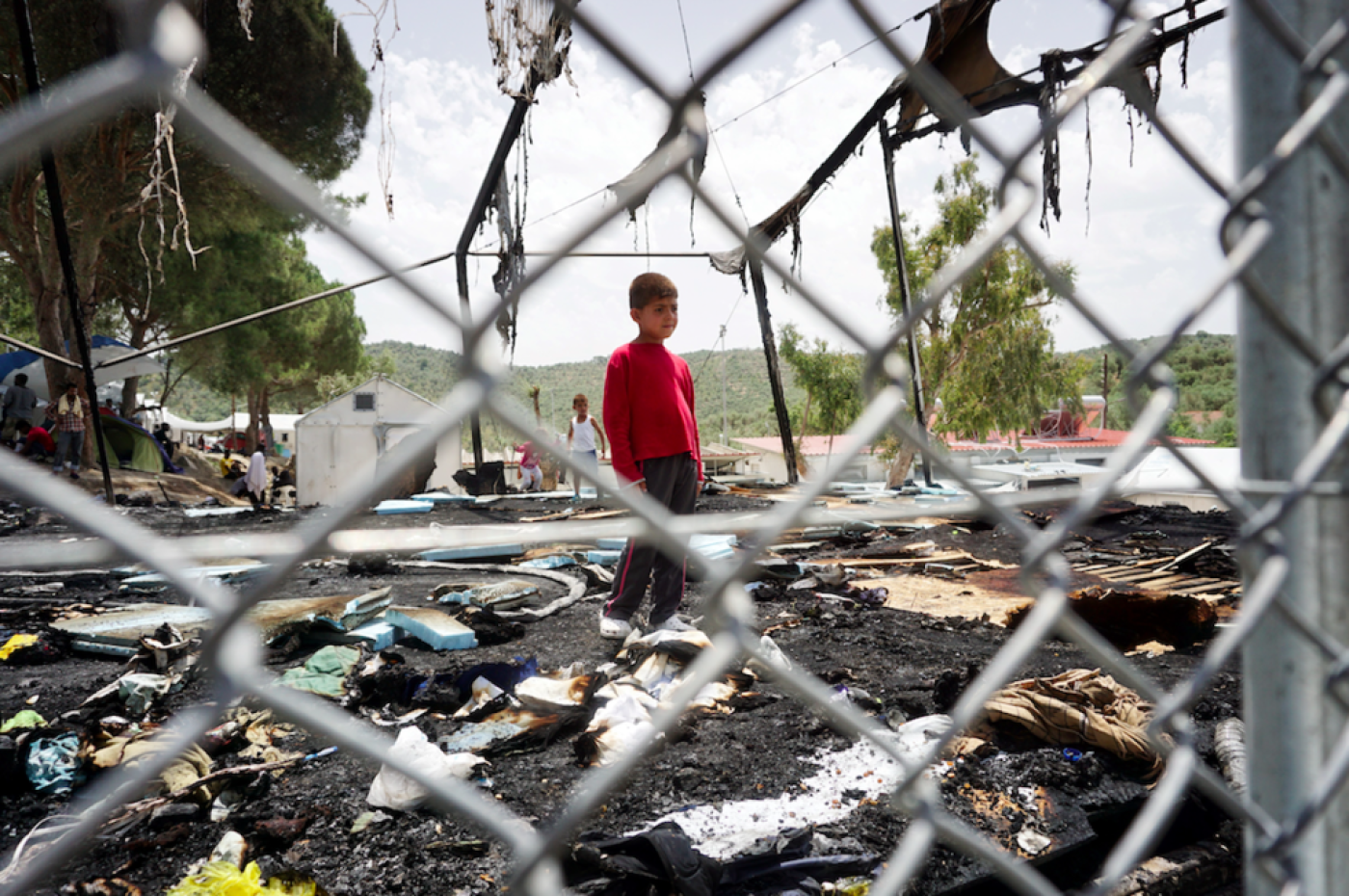 LESBOS, Greece - Conditions are worsening at refugee centres on the Greek islands, with police using force to quell dissent and calling residents “dogs”, according to sources inside the camps.

The images are backed up by claims that police have used tear gas and foul language to address residents, many of whom have been in the island centres for three months.

The revelations come after two weeks of violence between refugees on Lesbos and at camps on Chios, where collectively nearly 5,900 people are detained in facilities built for only 4,600. Recent weeks have also seen a surge of new arrivals on the Greek islands, with 266 arrivals on Lesbos, 216 on Chios and 150 on Samos since 20 May.

A fire at Lesbos’s Moria centre on 1 June destroyed living quarters and led to six people being hospitalised.

Days later, there was a similar blaze in the Souda camp on Chios, an island some 75 kilometres south of Lesbos, which has three main sites housing refugees.

The incidents were the latest in a string of protests on the Greek islands, where refugees are becoming increasingly frustrated at living conditions and a lack of information about their asylum prospects.

Videos shot on 31 May and obtained from a Moria resident show police armed with riot shields facing protesters throwing chairs and mattresses amid piles of burning rubbish.

A separate film, also filmed at Moria, apparently shows a policeman kicking a young woman while trying to separate her from a group of asylum seekers who are being held back by two other officers.

“It was a South African lady kicked by police,” said a camp source who witnessed the incident. “She was fighting with a Syrian and after that the police beat her. They released her after pressure from other refugees.”

The woman, who was not significantly injured, was seen returning to her tent without shoes.

Authorities did not respond to MEE’s request for comment on the incident.

Refugee hotspots on the Greek islands, including Chios and Lesbos, have been at the forefront of the crisis. These centres started out as temporary reception areas for new arrivals, but since a deal between the EU and Turkey came into force in March, new arrivals have been housed in the centres until their asylum applications are assessed. Those who are unsuccessful are deported back to Turkey.

Aid agencies have not released details about residents’ nationalities, but Afghans and Pakistanis are believed to be the biggest groups, with Syrians making up the largest number of new arrivals.

The hotspots are jointly managed by the Hellenic Police, Ministry of Migration and the Greek coastguard. They have come under repeated fire from human rights campaigners, with some aid groups winding down their support or pulling out of the centres altogether amid concerns about restrictions of movement.

While a spokesperson for the Greek authority managing the refugee crisis said residents “are not obliged or forced to stay within the facilities”, residents say they face a host of challenges in the centres, including verbal abuse.

“A couple of days ago I was in the food line,” one of the sources said. “I heard the policemen talking to each other, calling us dogs, saying that the ‘animals are getting food so we need to watch them’."

Guards sometimes spoke English because they knew some of the residents understood, according to the source. “They just want to tease,” he said.

The refugee crisis authority said that “in general, the word ‘dog’ or ‘dogs’ is not used in the Greek language as a demeaning or even abusive term,” while also stressing that the authority was “totally against this sort of language” and condemned any use of derogatory terms.

Both of MEE’s sources inside Moria – who asked to remain anonymous on security grounds – also said they had seen police using batons and tear gas on people in the camp, although they did not have photo or video evidence to support the claims.

“In the middle of May, there was a big fight between Afghan and Syrian guys, and I saw police using batons, about four or five times,” one source said. “And on the day of an EU visit they used sticks and tear gas. On that day I got tear-gassed. They often use tear gas at the time of protests and when guys get into dangerous fights,” he said.

One video clip seen by MEE shows refugees protecting their mouths and faces with scarves and rags after an alleged use of tear gas. This is often the first response to the irritant, which causes itching and redness to the skin and eyes. The second source also said he had witnessed the use of batons and tear gas.

“One time, Syrians got very angry about their asylum papers and attempted to storm a police office and the police threw tear gas,” he said.

Greek security forces have previously used batons and fire extinguishers on migrants on Kos, another island some 300 kilometres south of Chios, in an attempt to control angry crowds. The refugee crisis spokesperson told MEE the police do not have electric weapons including powered batons or taser guns in their arsenal.

Fighting and fires have also broken out in the three centres on Chios, where facilities are stretched well beyond capacity. Those responsible have not yet been identified, but angry refugees were believed to be behind the blaze.

Leslie Schick, a volunteer from the US who worked on the island for a month this year, said that “absolutely no information, aid or resources” were set aside after the fire [at Souda camp] towards improving living or safety conditions.

At two of three camps on Chios, the volunteer run catering services will struggle to provide food beyond 16 June amid a lack of funding, she said.

Overcrowded living conditions that Human Rights Watch described as “unsanitary” are only worsening the situation and raising tensions, according to residents.

Images and video from the Vial camp on Chios, obtained by MEE, also show filthy bathrooms that lack soap or lighting, with broken taps and walls broken in reported fighting.

At Moria, residents queued for up to several hours a day to receive meals supplied in part by the Ministry of Defence, and consisting of macaroni, bread rolls, juice and potatoes.

“The showers and toilets are very dirty and not fit for human use,” one resident said.

“I have been in Moria camp for more than three months and in that time I haven’t seen things getting better.”

'We are not safe here'

According to the latest UNHCR analysis, there are still multiple aid agencies working inside the camp, including Medecins du Monde and Boat Refugee Foundation, although residents say there is not enough help to meet their needs.

The refugee crisis spokesperson said the authority was addressing overcrowding by moving refugees to other camps and was making “great efforts under hard conditions” to improve living conditions, especially the quality of food.

It admitted that protests concerning living conditions had taken place “from time to time”, but that they have never “had violent outcomes.”

“In almost all cases, these kind of events were in fact a generalised set of interpersonal conflicts, empowered by the presence of other people of the same ethnic origin,” the spokesperson added.

But for the thousands of people stuck in the camps, the promise of reform sounds like too little, too late.

“We are not safe here,” said one resident of the Vial camp on Chios. “The people [other residents] are using bad language for us and our mothers and sisters.” Refugees
Ramadan in no-man’s land: Refugees on the run in Serbia