'We live on hope': The mothers Palestinian prisoners left behind

With their sons facing long sentences in Israeli prisons and strict visitation restrictions, these Palestinian women long for the day their children are free 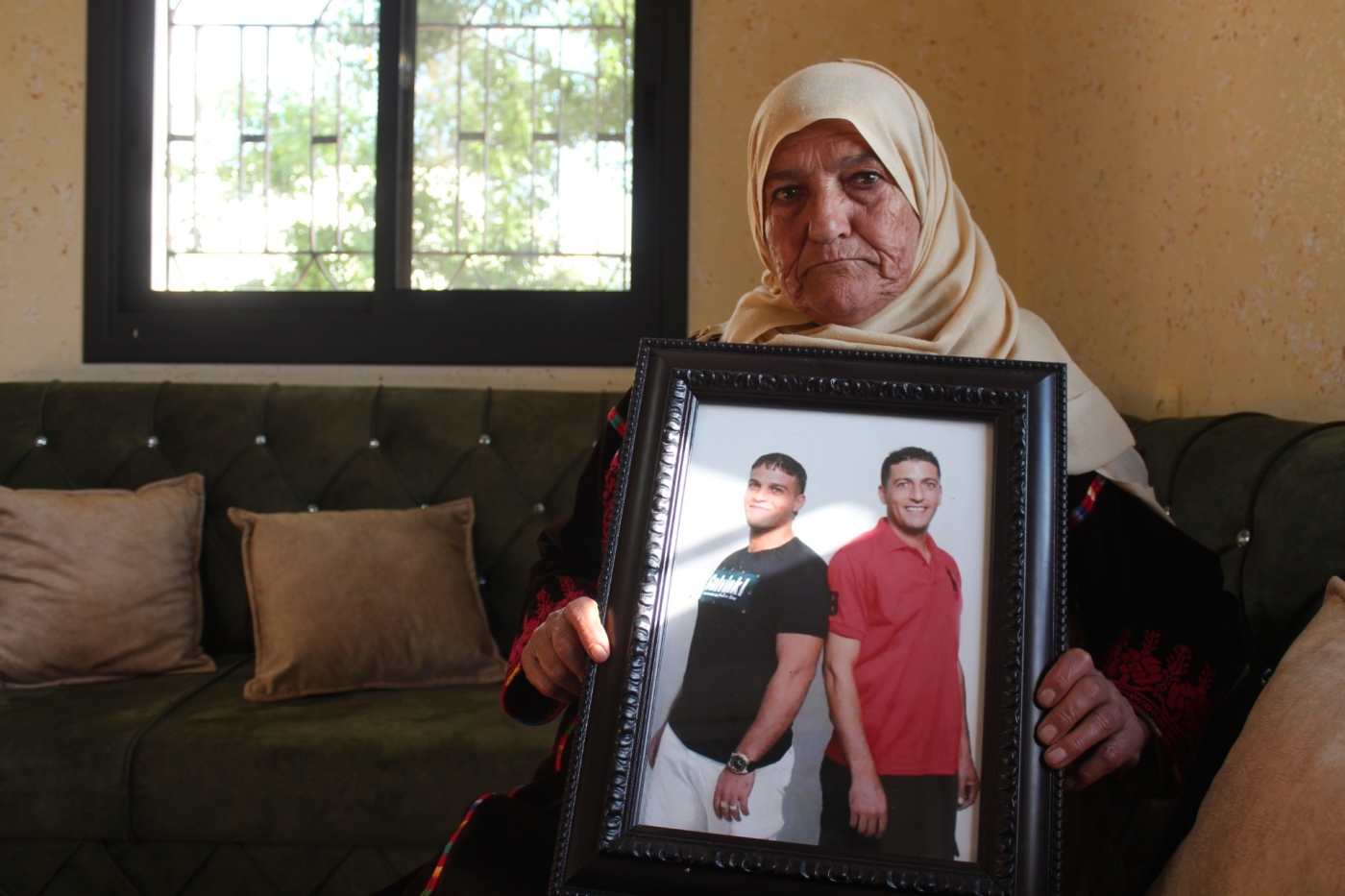 In her velvet hand-embroidered traditional thobe, sewn with red thread, 75-year-old Helwa Hamed sits by a window in her humble home, where the warm April sun seeps through onto photos scattered on the couch in front of her.

She inspects the photos delicately, picking one up and looking at it for a few minutes before taking another one and repeating the process. It is as though she is seeing them for the first time. The photographs are of her two sons, Akram and Rafat Hamed.

This is how Helwa spends her days, ruffling through the few old photos she has of her sons that were sent to her from inside Israeli prisons.

'They do not leave my mind during the day, nor my dreams at night'

Her three-year-old granddaughter, Seela, runs around her, grabbing a photo to play with every now and then. Helwa then gets irate, before chasing after her in the narrow room, with love, kisses and laughter.

Sixteen years have passed since her sons were taken away from her. In the early morning hours of 2 May 2004, the Israeli army stormed Helwa’s home in Silwad, a village to the east of the occupied West Bank’s Ramallah, and arrested Akram and Rafat, who were 24 and 22 at the time.

From that day onwards, all that has remained of their presence at home has been their photos. Today, Akram is 40 and Rafat 38.

"They handcuffed them in front of me after they were allowed to kiss me and say goodbye. I hugged them affectionately without expecting that it would be the last time,” Helwa tells Middle East Eye.

“I thought they would be gone for several months, or at worst several years, but they have not returned."

Israeli military courts in the West Bank handed Akram three life sentences, while Rafat was given one life sentence and 12 years. They were charged with killing Israeli soldiers and collaborators during the 2000-2005 Second Intifada.

When Helwa realised it would be a long time before her sons would come home, she stopped doing little things like setting their plates for lunch on the dining table.

“Akram loved to eat maqloubeh [a traditional Palestinian dish], and Rafat liked fava beans with yoghurt sauce. In the beginning, I refused to cook these dishes in their absence. Today, whenever I make them, I remember how Rafat and Akram used to enjoy eating them so much. It brings me to tears,” says Helwa.

Despite their life sentences, Helwa says she hasn’t lost hope that her sons will return.

"A few days ago, I dreamt that they were released and were coming home on a bus decorated with [Palestinian] flags. I was singing to them. It is not the first time I dream about them. They do not leave my mind during the day, nor my dreams at night," she says.

'I know my sons are strong and they will remain this way, even if I pass'

Since January, the last time she was able to see her sons, Helwa’s hopes have been revived. She constantly repeats Akram’s exact words: “Freedom is near.”

The long years without her beloved sons have been heavy on her heart and filled with pain, says Helwa. She also suffers from high blood pressure, diabetes and has lost much of her hearing. But against the backdrop of the Israeli occupation, the departure of Helwa’s sons was one painful challenge amid many others.

In 1987, Israeli soldiers shot dead Helwa’s 18-year-old son Mohammed during a peaceful demonstration he attended at the start of the First Intifada (1987-1993). In 2019, her 17-year-old grandson, Ayman, was also shot dead by the army; and in 2018, the Israeli army arrested two of her grandchildren, Mohammad Suhail and Ibrahim Rasim, before they turned 18. The latter spent two years behind bars.

Despite the emotional and physical torment, she is strong and firm. “I must always be resilient for Akram and Rafat. I must always give them hope. We know they are sentenced to life, but we are sure that they will be freed soon."

Their father passed away in 2006, while the two were still being tried in military courts. Though Helwa constantly fears she may die before her children return home, she says, “I know my sons are strong and they will remain this way, even if I pass”.

'I long to bring him back home with me’

Myassar Hammad is the 65-year-old mother of Palestinian prisoner Muayyad Hammad, 44, who was given seven life sentences.

“Every day I hear about the death of a prisoner’s mother or father, and I say to myself that tomorrow it will be me. They will announce my death while Muayyad is far away from me, inside a prison,” Myassar tells MEE.

She walks with heavy steps around the blossoming flowers in her garden, inspecting each one. "He loved gardening, and when the fruits would ripen, especially the tomatoes, he would collect them and distribute them to family and friends. They all miss his knocking on their doors.”

Myassar peers at the almond tree behind her and recalls Muayyad’s mischief as a child. “He would climb to the top of the tree, fill his pockets with green almonds, before jumping off.”

On 20 December 2003, a large number of Israeli soldiers raided Muayyad’s home. He was 27 at the time, a father of two children, and a third who was still in his mother’s womb.

"I remember clearly how the soldiers shoved him in the rain and one of them lay on top of him. Muayyad was looking at me and shouting, asking me to pray for him,” she says, explaining that she had never expected that her son would not return after that night.

"I stood there helpless, unable to free him from the grip of the soldiers, as I used to when he was a child. I remember pulling him out from inside a military vehicle and preventing them from arresting him one day.”

Before retiring, Myassar worked as an elementary school teacher. She says she misses how Muayyad had always lent her a helping hand around the house. “He would help me prepare food and always be by my side when I was in the kitchen. He would bake bread with me - he was my right hand.”

Muayyad no longer knocks on his mother’s door as he used to do every Friday, when Myassar would cook maqloubeh and the family would gather for lunch.

“Every time I visit him [in prison], I long to be able to bring him back home with me. I always return alone, with a broken heart. My soul stays with him, and I always see him coming home in my dreams.”

Israel charged Muayyad with participating in an armed cell that carried out an attack that killed three Israeli soldiers during the Second Intifada. He was sentenced to life imprisonment.

"He was subjected to harsh interrogation, and was tortured for about 40 days, but he did not admit to the charges they levelled against him."

On 2 April 2020, 85-year-old Zainab Hamed, mother of prisoner Ibrahim Hamed, died. Ibrahim has been in prison since 2006, facing 54 life sentences. He is the inmate with the second-longest sentence in Israeli prisons.

Zainab's death was not only painful to her family and her son, but also to the dozens of other mothers whose sons continue to languish in prisons, and who would learn patience and hope from her, her daughter recalls.

She was diagnosed with cancer and had completely lost her ability to hear. Zainab not only left her son behind in prison, but also four of her grandchildren - two of whom are sons of her daughter Inam, who is today reliving her mother’s harsh experience.

"I was learning to be as strong as my mother. I was learning patience from her after parting with my sons Abdullah and Saleh,” Inam tells MEE.

Saleh is Abdullah’s half-brother. Inam took up raising Saleh when he was nine years old after their father passed away and his mother remarried. Saleh was arrested in July 2009 and sentenced to 17 years in prison.

"All these years I had hope that he would soon be free. He has six years left, but I have hope that he will return to me before that,” she says.

"We live through all these years on hope. If it weren’t for hope, we would have died from sadness. The years that pass eat away at the age and health of our children inside the prisons."

In 2015, the Israeli army arrested her second son, Abdullah, and handed him a life sentence and 30 years after charging him with participating in the killing of a settler near the illegal West Bank settlement of Shavut Rachel.

For eight and a half years, Inam was forbidden from visiting Saleh, as the Israeli permits given to families of prisoners only apply to first-degree relatives, such as a mother, father, sibling or children.

The first time that she was able to see Saleh was a year and a half ago, when Abdullah was detained in the same prison.

'If it weren’t for hope, we would have died from sadness

“I did not recognise Saleh at first. He had changed a great deal. He lost his hair, and his teeth had fallen out after he took part in a mass hunger strike with other prisoners in 2017 for 40 days. He was a different person,” she recalls.

On the dining table she used to eat on with her two sons, Inam sits with photos of Saleh and Abdullah in front of her. “I cannot believe that all these years have passed, and they are away,” she says.

“Every day that I sit on this table without them, I cry and remember all the moments that brought us together.”

With every visit to see Abdullah, Inam returns with one phrase in mind: “Next month, I will visit you at home. I won’t leave you for a second. I will be near you forever.”

Reflecting on her son’s words, she says: “To us, a life sentence doesn’t mean forever… It means nothing to us as long as we believe in hope and freedom.” 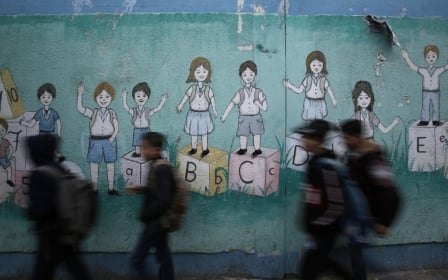