Sudanese and Ethiopian refugees have been staging a sit-in for four months, seeking answers for their asylum cases 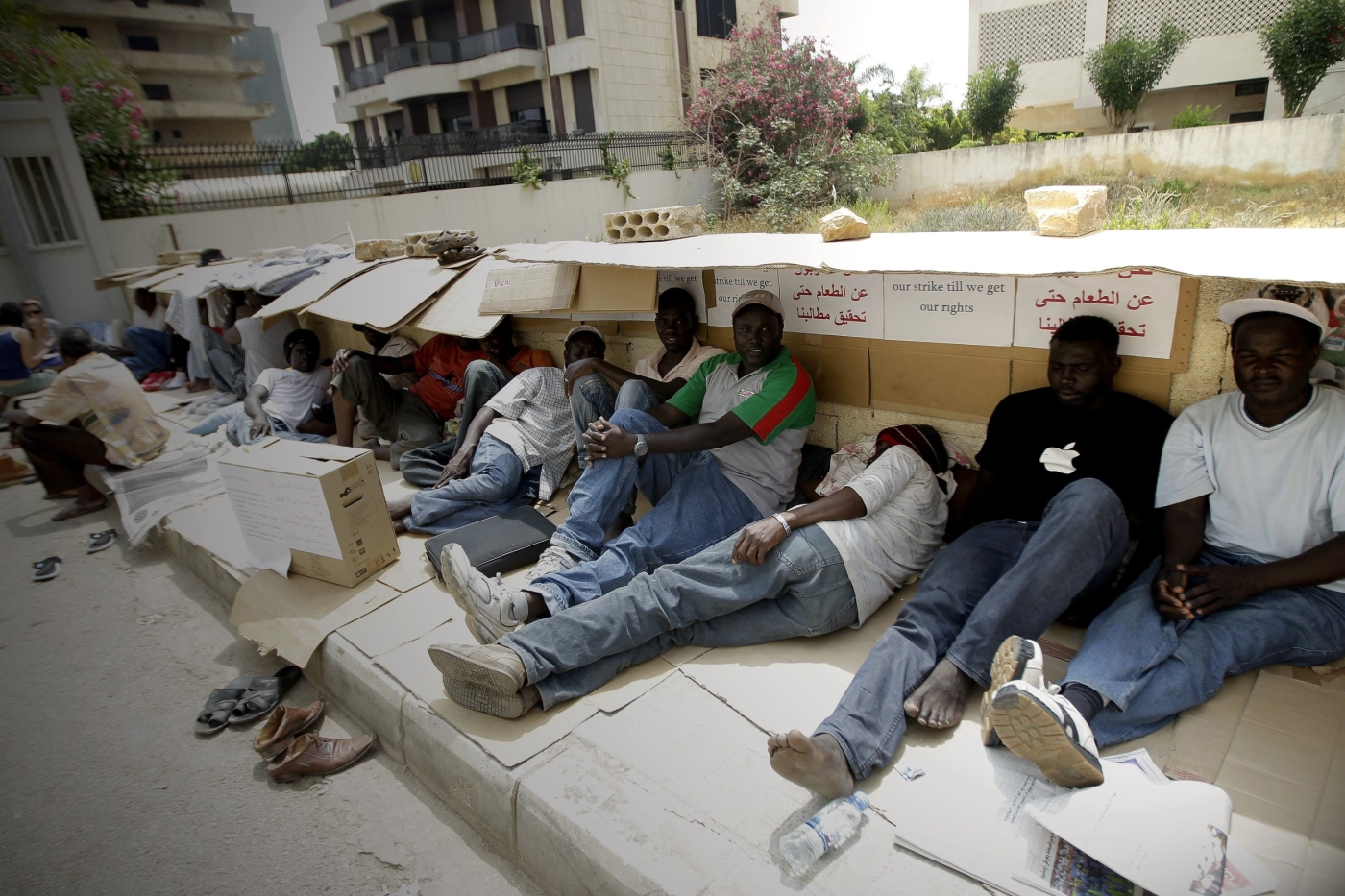 Sudanese refugees and asylum seekers on hunger strike camp outside the doors of the UN High Commissioner for Refugees in Beirut, June 2012 (AFP/File photo)
By
Abby Sewell
in
Beirut

As Lebanese citizens have descended onto the streets since October in mass protests over the economic and political failures of the country’s leadership, a small group of African refugees and asylum seekers have been staging their own, less-noticed protests.

About 15 men and women with their children, most of them Sudanese and Ethiopian, have been camped out for the past four months across the street from the headquarters of the United Nations High Commissioner for Refugees (UNHCR) in Beirut. On Tuesday, the demonstrators were joined by a small group of Lebanese supporters to further raise attention to their plight, chanting, “Take my file out of the drawer” and “Where are the refugee rights?”

UNHCR officials say that they are applying the same criteria to all refugees and asylum seekers. But the current sit-in is the latest in a series of periodic protests staged in recent years by African asylum seekers, who have complained that their cases have been neglected by the UN refugee agency.

The latest movement by asylum seekers came to a head on 3 December, when a number of protesters were arrested while trying to block the entrance to the UNHCR building.

Advocates said six Sudanese men and one Ethiopian woman remain in the custody of Lebanese general security and are facing potential deportation as a result.

The remaining demonstrators have continued to protest, both over the arrests and over their own grievances. Some of the protesters in the encampment told Middle East Eye that their UNHCR files had been closed for unclear reasons or that applications for resettlement had languished for years without any answers.

“We’ve been here for four months, under the rain and the storms and everything and still until now, they haven’t answered us,” said Ismail Mahmoud Ibrahim, a Sudanese asylum seeker who is camped out with his wife and two children in a small plywood shack covered in a tarp.

‘There is racism, one hundred percent’

Ibrahim said he has been in Lebanon since 2000 and registered with UNHCR in 2006. But in 2007, his file was closed. In 2016, he said he was deported back to Sudan by Lebanon’s general security, the agency responsible for enforcing residency regulations. Upon his arrival in Sudan, he said he was arrested by Sudanese authorities and jailed for more than a year, during which he said he was tortured.

He managed to return to Lebanon via smugglers in 2018 and has been trying without success to register with UNHCR once again. Ibrahim said he believes that Syrian - and before them, Iraqi - refugees have taken precedence over Africans.

“There is racism, one hundred percent,” he said.

Helen Sahle, an Ethiopian woman married to a Sudanese man, said both she and her husband were previously registered with UNHCR. But, like Ibrahim, both of their files were closed years ago. She said they have appealed the decision but without any success.

Their seven-year-old son is not attending school, she said, because they were not allowed to enrol him in public schools and cannot afford private schools.

“My husband was working - one day yes, one day no - but he fell and broke his leg and there’s no more work,” she told MEE. “My husband can’t go back to his country and I also can’t go back to my country. Because of that, we’ve been staying here and protesting.”

UNHCR spokeswoman Lisa Abou Khaled said the agency treats all refugees the same, regardless of their nationalities.

Refugee files may be closed, she said, “when a person is determined - based on an individual assessment - not to fulfil the criteria of a refugee, in accordance with international law.”

“That said, individuals always have an opportunity to have their files reopened for a review, and we do this regularly,” she said. “Persons who do not qualify as refugees are individually counselled on the decision and informed about the next steps. During counselling, we also advise persons on the services available to migrants in Lebanon.”

'We want to leave'

The situation of migrants and refugees has worsened in recent months amid a spiralling economic crisis. As the Lebanese pound has undergone a sudden devaluation, prices have risen and work has dried up.

“This country is tired. It’s not able to solve its problems,” said Tigest Beshada, an Ethiopian refugee who is registered with UNHCR. “I don’t want to be another problem for Lebanon. We want to leave, and they are not helping us or working on our cases.”

Seventy-two Sudanese refugees left Lebanon for resettlement in a third country last year, according to UNHCR statistics. The number of Ethiopians and other African refugees resettled was not available.

In response to a letter from Lebanon’s Anti-Racism Movement (ARM) outlining concerns about the treatment of African refugees, UNHCR noted that resettlement “is subject to the availability of quotas by third countries, as well as global and resettlement country-specific eligibility criteria”.

“Globally, resettlement is a solution for only a limited number of vulnerable refugees,” the UNHCR statement read.

“UNHCR uses the technicalities of refugee status determination and resettlement processes to discredit the demands of the protesters,” she told MEE. “In reality, UNHCR has a big role to play in shaping that system through advocacy with the Lebanese government and resettlement countries.”

Within the existing system, she said, UNHCR “can and should do a better job at counselling people on their cases through communicating in their native language in an accessible way and ensuring greater transparency in their decision-making processes, including their eligibility criteria”.

ARM has also alleged that “UNHCR staff have called the police to stop the sit-ins on several occasions, which resulted in a number of arrests over the years”, and claimed that “UNHCR security guards have resorted to violence to force the group out of their sit-in site”.

The group said refugees taking part in the protests had reported being threatened or given ultimatums by UNHCR staff regarding their files, and that five protesters have claimed their monthly cash assistance was stopped because of their participation in the protests - an allegation that UNHCR officials denied.

‘We are not enemies or against anyone, but we want help from the UN and there’s nothing’

In a letter sent to ARM in response to concerns raised about the incident, UNHCR officials denied the allegations, saying that the organisation’s staff “have at no time used verbal or physical abuse against the protesters, nor triggered their arrest”.

Regarding the instance when protesters were arrested in December, UNHCR said diplomatic police posted outside UNHCR headquarters had called for backup after requesting several times for protesters to clear access to the entrance gate.

When Lebanese police arrived, they arrested one protester and put him in the back of the police vehicle, the UN agency added, after which “several protesters ran to the vehicle at their own initiative and boarded the back of the pickup”.

It added that UNHCR had been advocating for the release of those who remained detained due to residency violations.

Woinshet Ababe, an Ethiopian protester who was among those detained that day, confirmed that only one man had been initially arrested, and said the others had followed because they did not know where the police were taking him.

Along with most of the other women arrested, Ababe was quickly released and back at the protest camp with her 4-year-old son.

For Ababe, the asylum seekers’ actions are motivated by their feeling of being at an impasse.

“We are not enemies or against anyone, but we want help from the UN and there’s nothing,” she said. 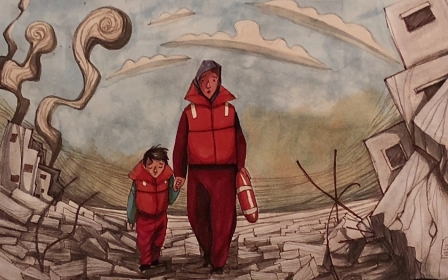