Without a trace: Sinai's disappeared A man rides his motorbike by a wall destroyed by an Egyptian army attack in the North Sinai town of Sheik Zuweid (AFP)
By
G. Yaganovna

CAIRO - Ahmed Gamal said he first began providing support for detainees and their families in October 2013, after two of his uncles were arrested and imprisoned in the al-Azouly maximum security military prison in Ismailia, north-east Egypt.

The town, some 75 kilometres south of Port Said, is known as “the city of beauty and enchantment” in Egypt, but it is also the leading destination for those arrested and disappeared in the troubled north Sinai.

“On my first visit to the military court in Galaa, Ismalia, I found my uncles and a few other detainees in the visitor’s room handing me pieces of cardboard with phone numbers engraved on them,” said the human rights lawyer who spoke to MEE under a different name for security reasons.

“I am mentioning that they were engraved because there are no pens to write with inside [the prison], of course.”

The visit would cause Gamal to embark on a journey which this week also saw him arrested and locked up behind bars. It remains unclear when and if he will be released.

Praying on the phone

At the prison, Gamal’s uncles urged him to smuggle the numbers out and begin calling.

The young man was not too sure who the numbers belonged to and what to expect once he got through. But when he did, Gamal had quite a shock.

The numbers belonged to families of men forcibly disappeared and transferred to Azouly prison. In many cases the families had no clue what had happened to their loved ones. They could not be sure if the authorities had taken them and had no clue where they were being held.

“I thought it was normal until I called the families and they began crying and praying for me on the phone,” Gamal told MEE before his arrest on Tuesday. “Since then they often call to ask about their imprisoned relatives.”

Enforced disappearances - in which people are taken either from their homes, offices or simply seized on the street - have grown more common in Egypt in recent years.

According to Human Rights Watch, dozens of people have been taken in this way with no records of their detention appearing in any police stations or prisons. The true number, however, could be much higher especially when the Sinai Peninsula is taken into account. The northern parts of the Sinai have been under military rule since last year, making it very difficult to document abuses.

Officials with the country's Ministry of Interior - and Foreign Ministry - have previously denied the claims of enforced disappearances, saying they only arrest people when they have a court order to do so.

Picked up by military

Various sources with knowledge of the situation have told Middle East Eye that forced disappearances and arbitrary arrests are the biggest threats facing north Sinai residents today, especially when travelling between cities or leaving the governorate.

Gamal said that those who tend to be forcibly disappeared are “taken arbitrarily, usually on their way to their lands, shops or work as they pass by military buildings or facilities… they are put in prison without facing a court”.

“It is a process called ‘inquiries’… and when the inquiries are over, the people are just let out the door and can just leave [prison],” he added.

In some cases, when the authorities decide to push on, the case will be referred to Cairo courts but Gamal insisted that “all [these] cases are fabricated, without exception”.

According to a 2014-15 Amnesty International report, many of the detainees subjected to enforced disappearances were held in secret detention at the al-Azouly prison in the al-Galaa military camp in Ismailia.

'We are buried alive'

“This [place] is a cemetery where we are buried alive,” one of Gamal’s relatives, who was detained but not forcibly disappeared, said in reference to the military prison.

The detainees who had been forcibly disappeared though were all being held “without official acknowledgement and were denied access to lawyers and their families,” he said.

In this military camp, there is no judicial oversight, and people face “torture and other ill-treatment by military intelligence and National Security Agency (NSA) officers to extract ‘confessions,’” the Amnesty report said.

“People get arrested from inside their homes at the hands of military forces,” Ali Abdel-Aty, another young North-Sinai-based human rights lawyer who also spoke to MEE under a pseudonym said. Abdel-Aty’s father has also been imprisoned since September 2013, when he was first taken to al-Azouly. He is now in Arish-Central prison, but his health is deteriorating and Abdel-Aty’s requests that his father be taken to a military hospital have gone unheeded.

Military presence in north Sinai is so strong that “of course police here don’t do anything but check licences”.

While most of the forcibly disappeared are missing for periods that range from a month to a year, there are some who have been missing without a legal trace for up to two years. As the case does not officially exist there is no legal recourse that people can take to find out where their relatives are, why they are being held, and how to get them released.

“Of course most families are too afraid to ask about them,” Abdel-Aty said, adding that family members are afraid if they ask they too might find themselves disappeared. Instead, he said, “they prefer to stay silent until the disappeared are released or until they finally appear in front of a court”.

“Three weeks ago, I called a woman whose husband has been gone since 28 June 2013. She sent a telegraph to the prosecutor general but then four months ago his father also disappeared,” Gamal said.

He also recalls the story of Mahmoud Shurab, a 19-year-old restaurant worker who was taken and later accused of spying on a military checkpoint, an often made-up charge in north Sinai.

“They are accusing Shurab of being a takfiri who has persistently targeted police and military facilities since 2011… Shurab looks like a child. Last time his brother asked him if he wanted anything, Shurab said he wanted seeds [to eat],” Gamal said to emphasise the arbitrariness of the arrests.

There are many cases such as this, Gamal recalled.

For example, one man was taken as he was walking home from work and later accused of attacking a checkpoint in an entirely different area. There are also more extreme stories: “The strangest thing I have seen,” said Gamal is the story of one man who is now detained in al-Azouly.

Gamal claims that this man was arrested along with a friend as they were passing by a military institution. He then claimed that the military officers took him on a helicopter and when they were up high enough, they threw one of the men out of the helicopter.

“Of course he died, and the other man was taken to Azouly,” Gamal said. He added that he heard the story from the man who survived and was later released.

It is impossible to independently verify such claims, with almost no foreign journalists, NGOs or independent monitoring groups able to operate in the area.

But Gamal said that the act is reminiscent of Argentina’s “death flights” during the 1970s in which the disappeared were dropped into the sea from helicopters.

A 20 July HRW statement documented the story of Sabry al-Ghoul, a 45-year-old Arish activist who was first arrested on 20 May and released six days later only to have army officers arrest him again from his home.

A military spokesperson claimed on Facebook that Ghoul was a “most prominent” suspect on a military wanted list and “a leader in the Brotherhood terrorist group,” in a reference to the now outlawed Muslim Brotherhood.

It is unclear whether that meant that the military acknowledged his detention prior to 2 June, but a few hours after the Facebook post, Ghoul’s body was sent to Arish hospital. His relatives said his body had bruises on his pelvis and chest, and “red spots behind his ears”.

The HRW statement said that enforced disappearances are “an ongoing violation that continues so long as the disappeared person remains missing”.

Enforced disappearances have also helped to pave the way to in-prison killings and death sentences in Egypt. If you are not officially missing, it becomes hard to prove what happened when you disappear for good. After months of waiting, some families said they heard the first news of their loved one’s whereabouts when their names appear in “terrorism” cases.

On 23 June, the Freedom for the Brave, a group that provides support for detainees and their families, wrote in a statement that the names of 200 forcibly disappeared people appeared in a case again Ansar Beit Al-Maqdes, a militant group operating out of the Sinai that has now pledged allegiance to the Islamic State group.

Their families found out through an article the in privately owned Egyptian newspaper Youm7.

According to Gamal, there is no survey or official figures about the numbers of disappeared in Sinai. With most families too afraid to speak out, and a general lack of communication amongst those who have been affected, getting information out is difficult.

With people like Gamal also finding themselves behind bars, documenting this phenomenon is extremely difficult.

“They [the disappeared] are many,” Gamal said. 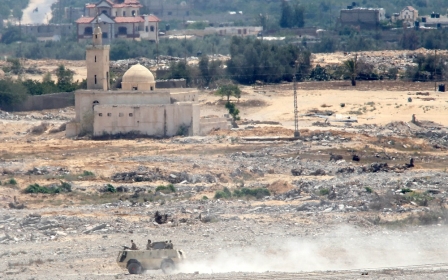