Worried Muslim Americans: We will fight for rights under Trump DEARBORN, United States - Donald Trump won the election. He will be inaugurated as US president on 20 January 2017. As they absorb this reality, concerned Arab and Muslim Americans have pledged to increase their advocacy work and fight for their constitutional rights amid fear in their communities.

Trump has proposed banning Muslims from entering the US, pledged to deport all undocumented immigrants and to suspend the Syrian refugee resettlement programme.

Arabs and Muslims are also worried about a rise in hate crimes, which they say was enabled by Trump.

Trump's rhetoric also mobilised the community during the election. Arabs across the US voted heavily for Hillary Clinton on Tuesday. This was highlighted in Dearborn, Michigan, where the Democratic nominee won upwards of 90 percent of the votes in some predominantly Arab neighbourhoods.

'Don’t cry about it; don’t be sad about it; just get up and start fighting for it'

Former Michigan state representative Rashida Tlaib said she was disheartened by Trump’s win, especially because the Arab American community was more engaged than ever in this election cycle.

“There were a lot of Muslim Americans, Arab Americans voting,” she told MEE. “I hope they don’t get disenchanted. This just means we’ve got to work harder.”

Rudy Giuliani, the former right-wing mayor of New York, is poised to be nominated as attorney general in the Trump administration.

Tlaib said she fears Giuliani will not crack down on hate crime or protect civil rights as the country's top prosecutor.

“The Arab and Muslim world has had far greater disasters over the last few decades than this peaceful transition of power in the United States,” he told MEE. “It’s natural for us to be frightened about our children and the future, but we have to have confidence in the institutions of America. We will survive this.”

Ahmed said he is unhappy about the results, but called for hard work to counter possible unfair policies.

“To all my friends and partners out there in the community, I say, don’t cry about it, don’t be sad about it, just get up and start fighting for it,” he said.

“We don’t have the numbers to combat these issues alone,” she said. “We need broader coalitions. We need to do the work. We need to be on the ground. We need to be organised. We need to make our ordinary community members who have no political interests into organisers.”

Noor said she watched people's reactions to the result in real time at an election night party at the Arab American National Museum in Dearborn.

"A lot of people were in shock and disbelief," she said. "This wasn't something that people were expecting. I don't think anyone in our community could think for a minute that we would have a presidential candidate who has his entire campaign on bigotry be the next president of the United States of America.”

Noor described Trump’s popularity as unsettling. She said Trump has not only been unwelcoming to immigrants, but has conflated Muslim identity with terrorism and violence.

“By voting for him, even if you are voting for him for different reasons, you’re essentially supporting our disenfranchisement,” Noor said.

Farris Barakat, the brother of Deah Barakat who was murdered with his wife and her sister in Chapel Hill, North Carolina, last year in a suspected hate crime, reported widespread fear among Muslim Americans after the election results.

“A lot of people are very afraid,” he told MEE.

The triple murder in February 2015 brought national attention to the rising hate against Muslims. The three victims were shot inside their home by a neighbour. Police said the crime was over a parking dispute, but it is widely believed that the suspect targeted the three Muslim Americans because of their faith.

Barakat said he hopes the popular support for Trump is not driven by his nativist and anti-Muslim views. He said he hoped that Tuesday’s result would create an opportunity for increased solidarity among Americans.

“It’s a chance for most people to step up against that rhetoric,” he said. “Even after the murders, one guy was able to do so much devastation, but in so many ways people came together to rally for a better place, a better country, a better Chapel Hill. But I can’t underestimate the amount of fear that people feel today.”

'Regardless of who won or lost yesterday's election, American Muslims are here to stay'

Muslim Advocates, a California-based institution, said it had criticised Trump's "undemocratic and unconstitutional policies" throughout the campaign, including vilifying Mexican Americans and threatening to jail his opponent.

"If president-elect Trump wants to bring America together and be a leader for all Americans, he will need to disavow these dangerous proposals and ideas," the group said in a statement, vowing to use every legal tool available to preserve US democracy.

"Today, we stand shoulder to shoulder with our fellow Americans who reject racism, bigotry, anti-Semitism and division."

Similarly, the Council on American-Islamic-Relations (CAIR) called on Trump to respect the rights of all Americans, but pledged to work with the new president to "strengthen the nation".

"Regardless of who won or lost yesterday's election, American Muslims are here to stay," CAIR national executive director Nihad Awad said in a statement on Wednesday. "We are not going anywhere, and will not be intimidated or marginalised."

The American Civil Liberties Union promised to hold Trump accountable through the courts, noting that his policies during the campaign contradict several US constitutional amendments.

"President-elect Trump, as you assume the nation’s highest office, we urge you to reconsider and change course on certain campaign promises you have made," Anthony D Romero, ACLU executive director, wrote in an open letter to Trump.

"These include your plan to amass a deportation force to remove 11 million undocumented immigrants; ban the entry of Muslims into our country and aggressively surveil them; punish women for accessing abortion; reauthorise waterboarding and other forms of torture; and change our nation’s libel laws and restrict freedom of expression."

Abed Ayoub, the legal director of the American-Arab Anti-Discrimination Committee (ADC), a Washington-based rights group, said the language that Trump used during the campaign about Arabs and Muslims is concerning if transformed into policy.

He said the president-elect must rein in his supporters, who may be inclined to harm minority groups.

"He's been elected as president of the United States - that's a reality," Ayoub told MEE. "He needs to make sure that this is a country for everybody and not exclude certain communities." 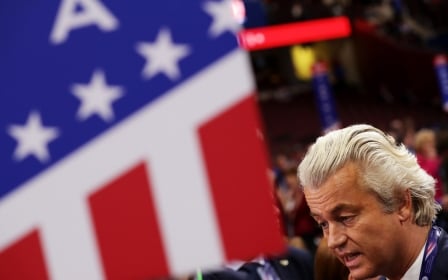