An image grab taken from an AFP video shows forces loyal to Yemen's President Abderabbo Mansour Hadi firing from a tank during clashes with Houthi militia in Taez on 20 April, 2015
By
MEE and agencies

A ceasefire in Yemen will be announced later on Tuesday, Iran's Deputy Foreign Minister Hossein Amir Abdollahian has said, according to the Iranian Tasnim news agency.

"We are optimistic that in the coming hours, after many efforts, we will see a halt to military attacks in Yemen," Abdollahian said.

Iran had offered to mediate a solution to the crisis in Yemen, a proposition rejected by the Yemeni government, who accuse Tehran of being part of the problem.

"Any mediation effort coming from Iran is unacceptable because Iran is involved in the Yemen issue," said Yemeni Foreign Minister Riyadh Yassin on Monday, accusing Tehran of supporting the Houthi militia.

"Iran has become a major part of the Yemeni crisis and those who are a party to the crisis... cannot become mediators," he said.

The Shiite Houthi militiamen along with forces loyal to former president Ali Abdullah Saleh have taken control of most of Yemen, prompting airstrikes from a Saudi-led coalition to support the government.

The Saudi-led air campaign was launched following a plea from President Abd Rabbuh Mansour Hadi after militiamen closed in on his refuge in the southern city of Aden. He has since fled to Riyadh.

The minister said Yemen's exiled government will not accept negotiations unless the Houthis and pro-Saleh forces lay down arms.

"The Houthis and Saleh forces must withdraw from all cities and villages of Yemen, including Sanaa and Aden, return to (their northern stronghold of) Saada as civilians, and lay down their arms," Yassin said.

"After that we can talk about dialogue and a political solution. But now there is no room for negotiations," he said.

Prior to the Saudi-led strikes, Riyadh had invited the Houthis to take part in a Yemeni national dialogue inside Saudi Arabia, but the militia refused the invitation.

The Huffington Post reported on Monday that Iran had advised the Houthi militia against seizing the Yemeni capital last September, but the Shiite militiamen decided not to take Tehran's advice.

The violence raging in Yemen since late March has killed 944 people and injured 3,487 as of 17 April, the World Health Organisation said on Tuesday.

The UN health agency said the numbers came from health facilities in Yemen, but the true figures are likely higher since many people are not making it to hospitals for treatment.

Last Friday, the WHO had put the toll at 767 deaths and 2,906 injured in the latest round of violence that began on 19 March.

The WHO toll does not distinguish between civilians and fighters.

Meanwhile, the International Organisation for Migration said on Tuesday it had temporarily suspended evacuations of foreigners from Yemen because of security hurdles posed by "all parties to the conflict".

Spokesman Joel Millman said the IOM had been forced to suspend the operation that began on 12 April "until further notice" due to "escalating difficulties faced in undertaking flight operations in recent days".

The IOM said it had flown more than 400 foreign nationals out of the war-torn country since 12 April.

"We call on all parties to the conflict to provide timely clearance for flights, cease demands to add passengers onto humanitarian evacuation flights on the basis of criteria other than the genuine vulnerability of populations of concern as well as guarantee unhindered and safe access for IOM staff in Yemen," a statement said.

Millman stressed that the main obstacle was not the aerial bombing, but instead the violence raging on the ground.

"We have to talk to the coalition members, (but) for the most part, getting enough time has not been the issue, or avoiding the bombardment. It's just the climate of violence around the airport," he said.

The IOM said the UN Security Council had adopted a resolution calling on all the belligerents in Yemen to help in the evacuation of foreigners but this was not being respected. 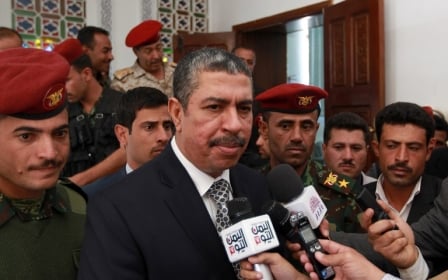