A pro-government fighter mans a machine gun position near the frontlines against the Houthis in the region of al-Kassara, northwest of Marib, in June (AFP)
By
MEE and agencies

Scores of Houthi rebels and pro-government forces have been killed in Yemen in renewed fighting for the strategic city of Marib, a military official told AFP on Thursday.

The clashes erupted when the Houthis attacked pro-government positions south of the city, making progress despite losing dozens of fighters in coalition air strikes.

"Twenty-two pro-government [forces] were killed and 50 others were wounded, while 43 Houthi rebels were also killed in the last 48 hours," a government military official said, in figures that were confirmed by other military and medical sources. The fighting comes after strikes on Yemen's largest airbase, in the country's south, killed at least 30 pro-government fighters on Sunday in the deadliest incident since December.

Yemen's internationally recognised government - backed by a Saudi Arabia-led military coalition - and the Houthis have been locked in war since 2014, when the rebles seized the capital Sanaa.

In February, the Houthis escalated their efforts to seize Marib, the government's last northern stronghold, in fighting that has killed hundreds on both sides.

Control of the oil-rich region would strengthen the Houthis' bargaining position in peace talks.

While the UN is pushing for an end to the war, the Houthis have demanded the reopening of Sanaa airport, closed under a Saudi blockade since 2016, before any ceasefire or negotiations.

The incoming UN special envoy for Yemen, Hans Grundberg, will officially assume his duties on Sunday. 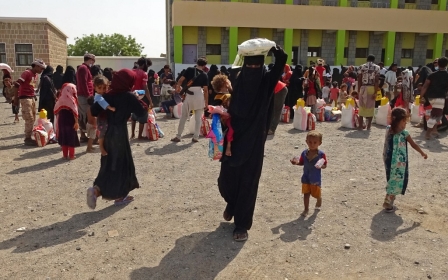 Yemen War
Millions of Yemenis 'one step away' from famine, UN envoy warns