Yemeni security forces gather at a site where a bomb-laden car exploded in Aden's Mansura district (AFP)
By
MEE and agencies
Yemen's government suspended on Sunday its participation in "direct" talks with the Houthi rebels in protest at their takeover of a military base in the war-torn country despite a ceasefire, officials said.
But government representatives will remain in Kuwait where they will continue to take part in indirect talks through UN mediator Ismail Ould Cheikh Ahmed, delegates said.
"We have decided to suspend direct talks with the rebels to protest continuing violations of the ceasefire" that came into effect on 11 April, a senior government official told AFP.
"We call on the United Nations to act seriously to end these violations which threaten to undermine the peace talks," said the government official who declined to be named.
He said a session that had been scheduled for Sunday afternoon would not take place, adding however that "contacts will continue with the UN mediator and sponsors" of the peace talks.
On Saturday, Yemen's warring parties held their first face-to-face talks since the negotiations opened in Kuwait on 21 April.
The UN envoy said these direct talks were "productive" and had touched on key issues.
But later Saturday, the rebels and their allies overran al-Amaliqa base in northern Yemen after hours of clashes, tribal and military sources said, adding that the fighting caused casualties.
The sources said that the commanders of the 600-strong brigade, located in the rebel stronghold province of Amran since 2014, had "chosen to remain neutral" as pro-government forces, backed a Saudi-led coalition, clashed with the insurgents across Yemen.
"The attack against al-Amaliqa brigade torpedoes the peace consultations in Kuwait," Yemeni Foreign Minister Abdulmalek al-Mikhlafi, who heads his government's delegation in Kuwait, said on Twitter.
Mikhlafi said his delegation will take "a suitable position" towards the rebels' "crime" against al-Amaliqa base without elaborating.
Yemen's warring parties have repeatedly traded blame for ceasefire violations.
Government loyalists said they have recorded "3,694 ceasefire violations by the Houthis and their allies" - troops fighting in support of former president Ali Abdullah Saleh.
Meanwhile, the rebels accused government forces and the Saudi-led coalition backing them of 4,000 breaches.
The coalition in March 2015 launched a military campaign against the rebels, who have seized the capital Sanaa among other parts of the country.
More than 6,400 people have been killed since then and around 2.8 million displaced.
Rebel spokesman Mohammed Abdulsalam wrote on Facebook Saturday that Saudi Arabia freed 40 Yemeni rebel prisoners, as part of a deal reached with the kingdom in March to calm the situation along the border. 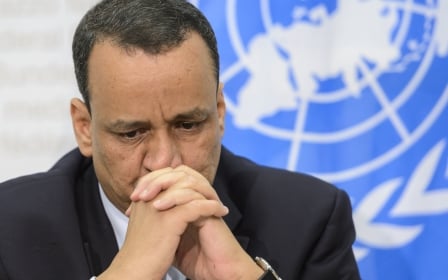