Houthi rebels in Yemen began handing over control of key institutions in the capital Sana’a on Sunday night, in a sign that a ceasefire signed earlier in the day between the rebels and the government could hold.

There were no fresh reports of fighting in the capital overnight on Sunday, despite allegations that Houthi rebels breached the ceasefire hours after it was signed.

UN General Secretary Ban Ki-moon welcomed the announcement of the ceasefire on Sunday, calling it a "positive step towards political stability" and demanding that the agreement be implemented "in full without delay."

The historic agreement, brokered by UN special envoy to Yemen Jamal Benomar after days of speculation, appears to give Houthis significant concessions, in a deal which agrees sweeping changes to the formulation of the government and the country’s welfare system.

The deal came after Yemen’s Prime Minster and the Mayor of Sana’a resigned on Sunday, with the Prime Minister accusing President Mansour Hadi of being “autocratic” and failing to deal effectively with the Houthi crisis.

The main part of the agreement, which deals with political reform and welfare, was agreed by all parties.

However, rebels refused to sign the security annex of the deal, which demands “the re-establishment of state authority” in Sana’a and throughout the rest of the country.

The annex also demands that Houthis pull back from their encampments in the capital and hand over the institutions they controlled in the capital, according to a presidential source who spoke to Anadolu Agency on condition of anonymity.

Though they did not sign up to this part of the ceasefire agreement, Houthi rebels began handing back control of key institutions in Sana’a to military police on Sunday evening.

Houthis had seized control of several sites in the city, including the Defence Ministry and the headquarters of the Central Bank, on Sunday afternoon.

Yemeni military police forces regained control of these sites after the agreement was signed, “with the aim of protecting their contents”, according to Yemen’s official Saba news agency.

Despite the progress, the rebels have so far refused to withdraw completely from Sana’a, where they have been living in tented sit-ins and running checkpoints at strategic sites for over three weeks.

Yemen’s spokesperson in the US, Mohammed al-Basha, said that though he is pleased to see the country back on the political track, he is “crushed” by the agreement.

In a seeming breach of Article 14 of the main part of the agreement, which the Houthis agreed upon and which states that “manifestations of the threat or the use of force [by Houthis] shall cease”, militants stormed the home of Yemeni activist Tawakkol Karman shortly after the deal was signed.

The Nobel Laureate reported that Houthis had burst into her home late on Sunday, hours after the ceasefire was agreed.

Translation: 12 Houthis burst into my house, after the deal on peace and national partnership agreement was signed!

Karman has been vocally critical of the Houthi campaign in Yemen, which she dubs a “militia” movement, and is known for her antagonism to all armed non-state groups in the country.

More than once during the almost month-long lead-up to the current face-off, Karman called publicly for the Houthis to disarm and become part of the mainstream political process. Karman also reported that Houthi rebels had stormed the air forces headquarters in the capital.

Translation: Hours after signing the peace and national partnership agreement, the Houthis have reneged on the deal by attacking the headquarters of the air defence force in Sana’a.

A military source who spoke to Anadolu Agency later confirmed this report.

Karman has long accused the Shiite Houthis of having significant support from Iran, and claims that Yemen is in the grip of a proxy war remain rife in the country, amid fears that Yemen is becoming a site for increasing conflict between regional power-players Saudi Arabia and Iran.

Abdel Salaam Mohammed, director of Sana’a-based think tank Abaad Studies and Research Centre, wrote on Sunday evening that “what has changed now in Yemen is that it has transformed from being a site for an intelligence-based conflict between Iran and Saudi Arabia to being a site for Iranian military influence in the heart of the Gulf!

Saudi Arabia, which shares a 1,800 kilometre border with Yemen, is wary of the Zaydi Shiite movement - that the Houthis belong to - gaining ground in its northern neighbour.

The restive northern province of Sa’ada, where the Houthi tribe has long held sway, lies just across the border from the Saudi province of Najran, which is host to a significant minority population of Zaydi Shiites, as well as a majority of one million Isma’ili Shiites. 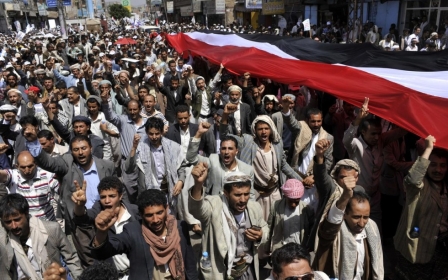 Inside Yemen
The Houthis: A rising political force