In Taiz, local workers tell MEE they think the current ceasefire may result in the return of vital services 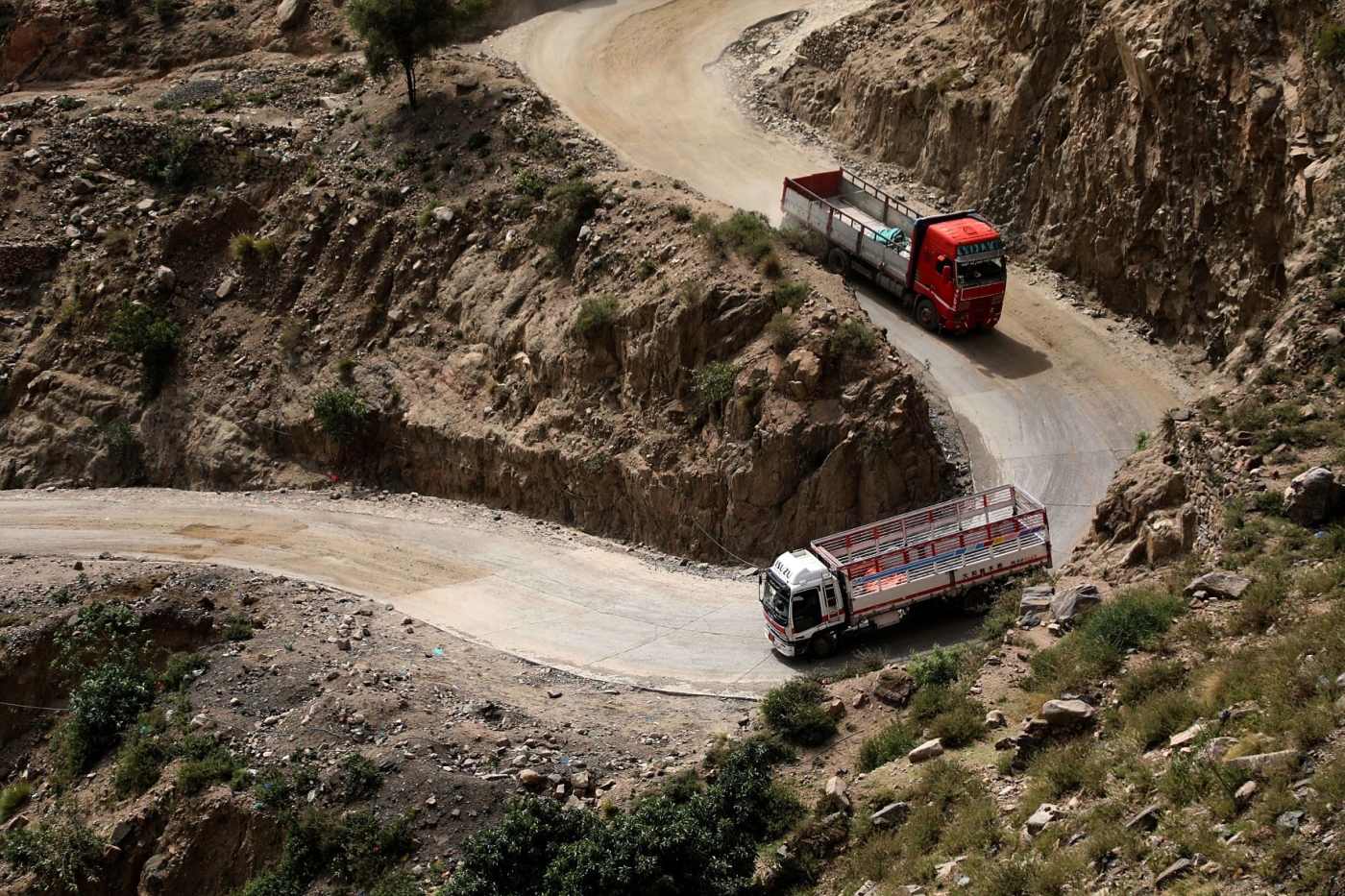 Vehicles are pictured at a heavily damaged road, the only travel route between Yemen's cities of Taiz and Aden, on 23 September 2020 (AFP)
By
MEE correspondent
in
Taiz, Yemen

Before war came to Yemen in late 2014, it would take Ahmed about ten minutes to drive from the centre of Taiz city to the nearby area of al-Hawban.

By 2015, the main road out of the city was closed and the drive now took five hours through dangerous mountain passes.

“I can see my house from Taiz city but I can’t reach it because the road is blocked and if I want to visit my family I travel for five hours through mountains,” Ahmed, who preferred not to provide his full name, told Middle East Eye.

Ahmed lives in al-Hawban, which is part of the Taiz governorate. But he works at a restaurant in Taiz city.

Unable to afford to rent a room in the city following the closure of the main road, Ahmed sleeps in the restaurant with his fellow workers. Every two weeks he takes the mountain roads back from the city to see his family.

“Moreover, the soldiers at the checkpoints stop us every time to investigate our destination and what we are working on,” Ahmed said of his fortnightly trips along the dangerous mountain roads.

Hope for Ahmed and many others across Yemen came on 2 April, when the country’s warring parties signed a two-month ceasefire led by the United Nations.

The truce holds (for now)

It’s the first truce to have been agreed since 2016 and so far, it’s holding up.

The agreement was brokered in the midst of a fuel crisis in areas controlled by the Iran-aligned Houthi group, with the Saudi-led coalition not allowing fuel tankers to come into Hodeidah port.

The parties accepted a halt to all offensive military air, ground and maritime operations inside Yemen and across its borders.

An agreement was struck to allow fuel tankers to enter Hodeidah port and for commercial flights to once again fly in and out of Sanaa airport to predetermined destinations in the region. 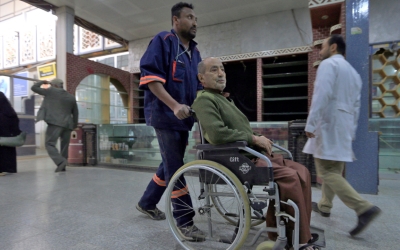 Also part of the agreement: a meeting was held under the auspices of the UN envoy to Yemen to arrange the opening of roads in Taiz and other provinces across Yemen.

Since the truce, the ceasefire has more or less held in Yemen, with almost no air strikes and no missiles fired across the country’s borders.

Fuel tankers have been arriving in Hodeidah regularly and Sanaa’s airport was opened for commercial flights on 16 May.

“This truce made me optimistic about opening roads to Taiz city,” Ahmed said.

“I hope they extend the truce so I can stay in my house and go to work every day from my home. This seems to be a dream but now I feel it can be achieved… If the special envoy to Yemen goes through this road he will prioritise opening roads to Taiz.”

In the past, Ahmed heard rumours about roads reopening in Taiz, but didn’t believe them. This time feels different.

“We used to hear rumours about opening roads to Taiz amid fighting, which was impossible. But now Taiz is safe, there is no fighting and it is possible to agree on opening roads,” he said.

'Peace is the demand'

Like Ahmed, Mu'ath Jaber, a resident of Sanaa, is focused on peace.

“Peace is the demand of all Yemenis, no one wants war. If peace is there, other things can come after,” he told MEE. “We really feel the great impact of this truce, since the first day of the truce we have heard no warplanes hovering over us and that means the beginning of the peace.”

Jaber confirmed that the end of the fuel crisis played a major role in reducing the cost of transportation, electricity and many other basic commodities.

'When I watched the first flight arrive at Sanaa airport, I couldn’t hold back the tears of happiness'

“Before this truce, the fuel crisis was about to kill us, as everything was expensive, but now we enjoy peace and better life.”

Problems remain, Jaber acknowledged. Public employees are still not being paid. Some basic services are not being provided. But he described the situation now as better than it was in the months leading up to the truce.

The reopening of Sanaa airport is a potent symbol of that. Jaber did not previously travel abroad and he does not plan to leave Yemen, but it still meant a lot to him.

“When I watched the first flight arrive at Sanaa airport, I couldn’t hold back the tears of happiness,” he said. “Reopening Sanaa airport reminds us of regular life. It is a sign of peace.”

Jaber knows that the truce will end on 2 June, but he hopes the warring sides will agree to extend it and take further steps towards bringing the war to an end.

Back in Taiz, Murad Abdulhakim, 29, a local resident, told MEE: “We are happy to see Sanaa airport is open again for commercial flights and we will be happier if roads to Taiz are opened too, so we can travel to visit our families and relatives in Sanaa and other provinces.”

Hospitals are not good in Taiz, Abdulhakim said, pointing out that patients used to travel to Sanaa for better healthcare, something that is no longer possible because of the difficulty of the journey.

“Sanaa is the capital of Yemen. By opening the roads, Sanaa will be linked again to Taiz, so people in Sanaa can visit their families in Taiz and people in Taiz can seek services in Sanaa,” he said.

On Sunday, the Houthis announced that they had named their representatives for a joint committee that will work to reopen roads in Taiz and other provinces.

Ahmed, at least, is hoping the days of five-hour mountain drives just to go home might finally be at an end. 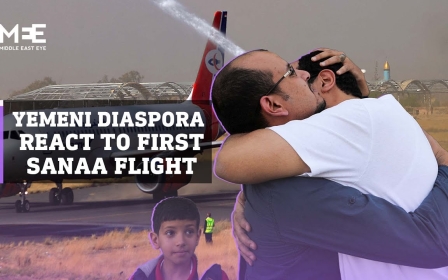 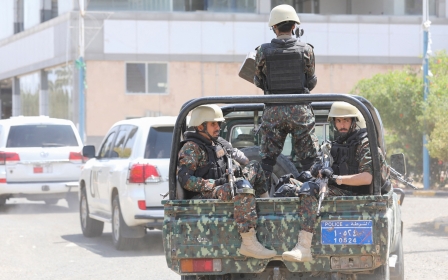 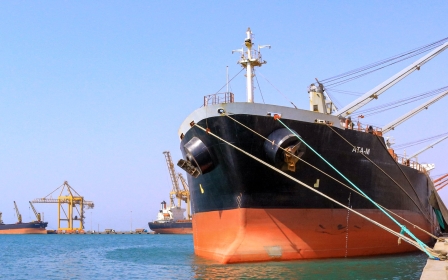