'They watched their friend bleed': Yemeni ex-footballer and son killed in stadium attack A child holding a protest placard on 13 December inside Taiz's al-Ahli football stadium, where a father and son were killed in a bombing attack the previous day (MEE/Khalid Al-Banna)
By
MEE correspondent
in
Taiz, Yemen

For many sports-loving children in the Yemeni city of Taiz, their morning football practice is a good reason to wake up early. Every day, they come to al-Ahli stadium to play with other youngsters and some adults, savouring in the beautiful game a short reprieve from life's uncertainties.

It's impossible to find safe playgrounds these days in Yemen's third-largest city. Attacks are commonplace, and Taiz residents say there is no place completely free from danger, as shelling and air strikes seem to target schools, hospitals, mosques, and homes indiscriminately.

'With terror in our hearts, we ran towards the dust of the explosion to check who was under the ruins... Then we realised they were Raimi and Imran'

Nasser al-Raimi used to encourage his friends and their sons to come and play in al-Ahli football club stadium, which he considered a "safer" location than most.

The former national team footballer was a keen supporter of budding athletic talent, and he and his 10-year-old son, Imran, had become a staple feature on the field and were always on time for their daily practice.

On this day, a group of children and their fathers were still belatedly making their way to the stadium for their session with Raimi when the ground shook.

"It was 7:30 when a rocket fell on the stadium building," said Faisal Asaad, who witnessed the attack from a short distance away.

"With terror in our hearts, we ran towards the dust of the explosion to check who was under the ruins. We only found body parts, and couldn't recognise the victims at first," Asaad told Middle East Eye.

"Then we realised they were Raimi and Imran."

The attack on 12 December killed Raimi and his son and wounded two other children. It was the latest in a series of bombings that Taiz has been witnessing since the beginning of the Yemen civil war in 2015.

The recent escalation of fighting between local forces and Houthi rebels has led to indiscriminate shelling of residential areas in the city, and more than 100 civilian casualties, many of them children, have been recorded over the past two months alone, according to the United Nations.

'As any other father who cares for his children and doesn't want to lose them, I won't allow them to go to the stadium anymore'

In a statement, the Ministry of Youth and Sports mourned the "martyrdom" of Raimi while blaming the Houthis for bombing the independent sports facility "without justification". The Yemeni sports community also expressed its shock and condolences for the former captain of al-Taleea football club.

For many parents of young athletes, the attack on the football stadium was the final straw. They now keep their children at home, deeming safety more important than the "pleasures" of playing sports.

"As any other father who cares for his children and does not want to lose them, I won't allow them to go to the stadium anymore," said Shawqi Ahmed, whose two children were wounded in the stadium bombing.

"There are no alternative locations where my children can play safely, as the entire city is under the threat of shelling."

His sons were very close to Imran, Ahmed said. They were together in the stadium at the time of the bombing and had "watched their friend bleed" next to them.

Ahmed told MEE that he was waiting to see if the attack would have a psychological impact on his sons, or if they'd ever want to play in the stadium again.

"Until now, my sons still don't know that Imran was killed. We told them that he is receiving treatment in the hospital together with his father."

He tries his best to shield the children from the painful reality. Whenever people come to visit the boys, he greets them outside the house and tells them not to mention the names of the victims or anything related to the incident.

Even so, Ahmed has noticed some changes in his boys.

"Since the attack, they are in doubt, they don't speak a lot and prefer to stay in the corner alone."

Bilah al-Hakimi, the secretary of the general manager of the Youth and Sports Office in Taiz, said authorities encourage talented children to practice various sports regularly, and they continue to recruit players for the national team despite the war.

However, he conceded that there was no completely safe place to practice sports in Taiz, citing that at least five main stadiums in the province had been the targets of bombing or looting since the war began.

"Talented children as well as the footballers need not only physical training but also psychological support, and we do our best to provide them with that," Hakimi told MEE.

Philippe Duamelle, humanitarian coordinator in Yemen for the United Nation Office for the Coordination of Humanitarian Affairs, called the al-Ahli bombing a "shameful attack" on civilians.

"Children continue to pay the highest price in this conflict, and far too often they are playing with their lives," he said

"This is one more shocking breach of international humanitarian law... Once again, we implore the parties to the conflict to abide by their obligations and stop killing and injuring civilians."

Asaad said he was devastated by the death of his good friend and could still vividly recall the children's screams in the immediate aftermath of the stadium attack.

"All the children as well as adults at the scene were terrified. It's only natural to scream at the sight of such horror, seeing your friends being killed or wounded," he said.

One silver lining, he reasoned, was that the bombing did not take place even earlier, when some 30 children were practising in the stadium before Raimi's session. "If the rocket had fallen half an hour earlier, there would have been a massacre," he told MEE.

On the day after the attack, colleagues and friends of Raimi and Imran returned to the site of the bombing, carrying with them Raimi's bright neon shoes, which had been recovered from the debris.

Standing inside the damaged stadium, they held banners condemning the attack, and others in remembrance of the father and son who played with hope until the end.

Yemen has seen a resurgence in fighting this year, with bombings in the first half of 2020 doubling those of the previous period.

The country also remains the world's worst humanitarian crisis. According to the UN, nearly 80 percent of the population require some form of humanitarian assistance and protection. As of 13 December, only $1.65bn of the $3.2bn needed for humanitarian response in 2020 had been received, it said. 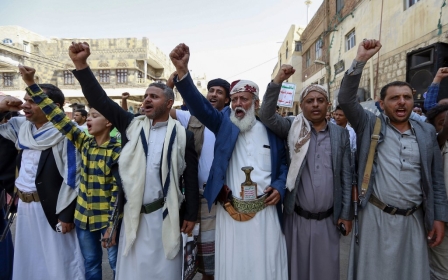