As rumours swirl of Yemenis fighting in Libya, mercenaries enlist to join the war

Yemen’s Popular Resistance in Taiz has been training new recruits, who suspect they are being sent to the Libyan conflict to help the GNA 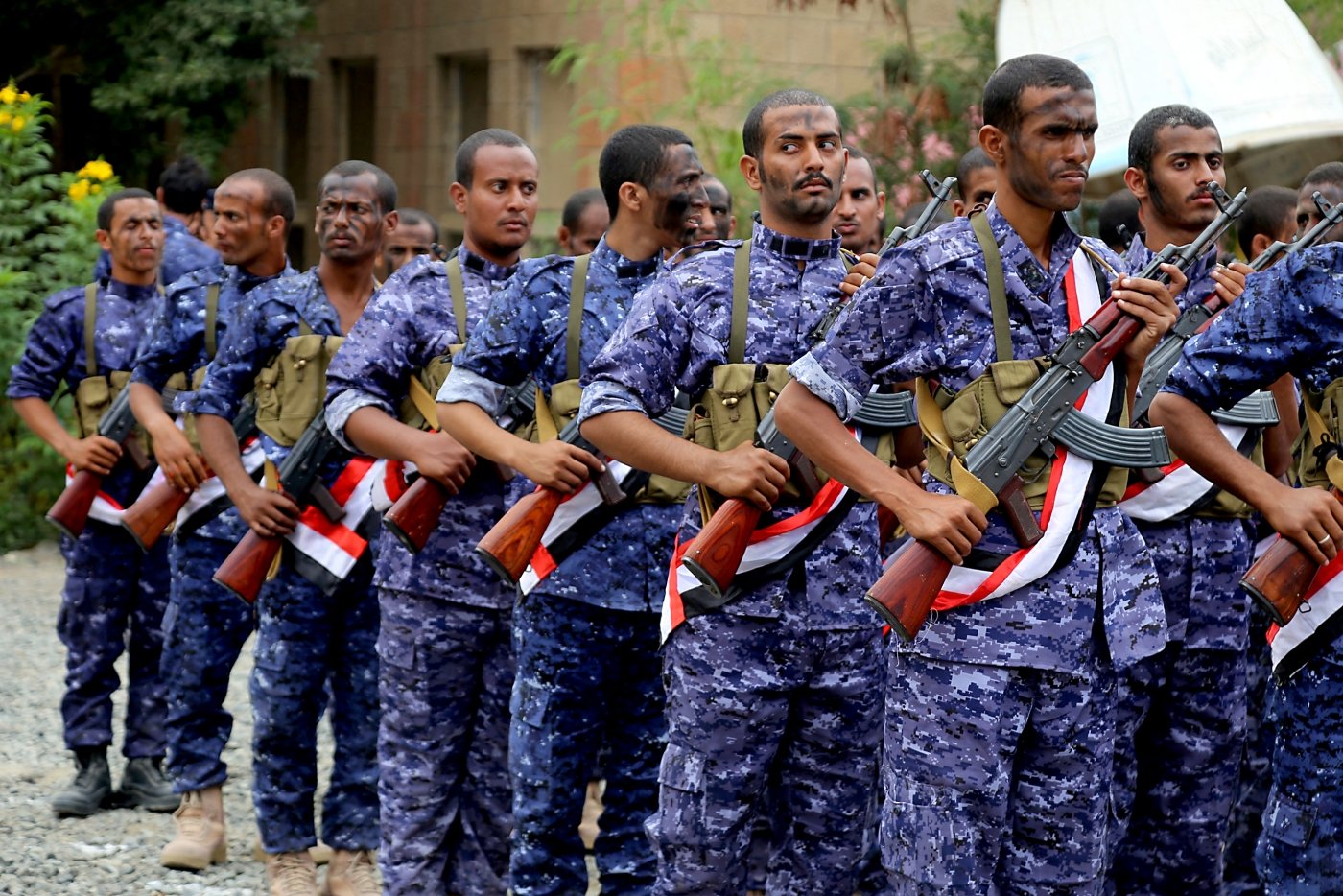 Yemeni fighters from the Popular Resistance take part in a graduation ceremony in the city of Taiz, on 5 August 2019 (AFP)
By
MEE correspondent
in
Sanaa

For days, rumours have been circulating that Yemeni mercenaries have left their own conflict for the one in Libya, joining an ever-growing international presence in the war-torn North African country.

Whether the rumours are true or not is difficult to establish, though four months ago one Yemeni militia, the Popular Resistance, began a recruitment drive, promising Yemenis military training but not disclosing the front they would be sent to.

Either way, for struggling Yemeni mercenaries looking to earn a decent wage amid war, economic collapse and the coronavirus pandemic, the location of the fight is neither here nor there.

New Popular Resistance recruits tell Middle East Eye they're happy to fight in someone else’s war - for the right price.

Rumours in the media

The Popular Resistance is a militia linked to Yemen's Islah party, a Muslim Brotherhood affiliate that has good relations with both Saudi Arabia and its regional rival Turkey.

Part of the Saudi-led coalition fighting the Houthi movement, the party and the militia have enemies within the alliance battling on behalf of President Abd Rabbuh Mansour Hadi's government - particularly groups allied with the United Arab Emirates, which is a major backer of eastern Libyan commander Khalifa Haftar.

Recent reports by anti-Islah media in Yemen have accused the party of sending Yemenis to Turkey under the guise of receiving medical treatment, then transporting them to Libya. Turkey has sent arms, drones, advisers and Syrian mercenaries to Libya in support of Haftar's enemy, the UN-recognised Government of National Accord (GNA). Some news websites said military and intelligence sources have revealed that 200 mercenaries from Yemen have arrived in Libya to fight on behalf of the Tripoli-based GNA.

Islah has a good relationship with Turkey, where many of its leaders are currently based after fleeing Yemen via Saudi Arabia in 2015. Pro-Islah TV channels are also based in Turkey.

Neither Islah nor Hadi's government have commented on the news about Yemeni mercenaries in Libya, and there has been no official confirmation that the party has sent fighters from Taiz and Marib provinces to Turkey.

Hundreds of wounded pro-Islah fighters have travelled in the last four years to receive medical treatment in Turkey. Media reports have alleged that some have claimed to be wounded, but were in fact mercenaries on their way to Libya.

The founder of the Popular Resistance in Taiz, Sheikh Hamoud al-Mikhlafi, an Islahi, left Yemen in 2016 and has been based in Turkey since.

His commanders on the ground in Taiz have in recent weeks been recruiting fighters left, right and centre, promising wealth but not revealing their destination. Schools across the southwestern province have been left empty by the coronavirus pandemic, and the Popular Resistance has commandeered them, turning them into training camps for new recruits. Yemeni mercenaries have long fought the Houthis on the border with Saudi Arabia, but though the money was good many have abandoned the fight and returned home disillusioned by the fierce battles and dirty politics.

Prior to his latest recruitment efforts, Mikhlafi called on returnees from the battles on the Saudi border to join his camps in the outskirts of Taiz and thousands signed up. Others struggling to get by away from the fighting have also been tempted.

“My shop went bankrupt and I don’t have any other source of income, so joining the fighting is the only choice for me,” said Walid, 38, an owner of a mobile accessories shop in Taiz city.

“Many of my friends joined the battles with Saudi Arabia but I didn’t like that because Saudi Arabia has been destroying Yemen.”

Walid told Middle East Eye he trusts Mikhlafi "as he himself was a fighter and works for the interest of Taiz’s residents".

“I closed my shop and joined the training for one month.”

Desperate for income, Walid said he is willing to fight anywhere with the Popular Resistance for money.

“The fighters on the internal fronts receive only 57,000 Yemeni rials ($76) per month, so I would not be happy to join them,” he said.

“There is information that some of us will go to fight in Libya, and that’s the best choice for me.”

Walid said news they will be sent to Libya is being spread among the recruits, and they had been promised $2,500 per month once in North Africa.

'There is information that some of us will go to fight in Libya and that’s the best choice for me'
-Walid, Popular Resistance recruit

“Almost all recruits in the school hope to travel to Libya but it seems that we won’t be as we have been waiting for around four months,” he added.

“We’re back home now and receive a salary, but we don’t know where we are going to fight.”

Walid said none of his fellow fighters have travelled to Turkey, and he hasn’t heard of anyone who had already participated in the fighting in Libya.

“Even wounded fighters couldn’t travel to Turkey in the past four months because of the coronavirus restrictions,” he said.

“I hope we can leave this country and earn some money that would help us to save our future.”

Meanwhile, there have been reports about a supposed covert Turkish presence in Yemen, with activities concentrated in Shabwa, Taiz and Socotra. Some Islah members have also called on Turkey to intervene to rid Yemen of the Saudi-led coalition.

Anees Mansour, former media adviser to the Yemeni embassy in Riyadh, has appeared in more than one video urging Turkey to intervene in Yemen.

“Yemen needs a Turkish intervention,” Mansour said in one of the videos, accusing the Saudi-led coalition of destroying his country.

Mansour also praised the Turkish-backed forces in Libya, who succeeded in pushing back Haftar’s yearlong offensive on Tripoli, saying that the entire Arab world was happy for their victory.

Like many other Islah leaders based in Turkey, Mansour supported the coalition when it intervened in Yemen in 2015 and fled to Saudi Arabia at the time. But today they are calling for a new intervention.

Abdulghani, a member of the Islah party based in Marib, said that while he was proud of Turkey and its achievements in Libya, he was against its involvement in Yemen.

“All Muslims should be proud of Turkey and [President Recep Tayyip] Erdogan as he represents Islam in its best form, but we don’t need any more interventions in Yemen,” Abdulghani told MEE.

“We are suffering from Saudi, Emirati and Iranian interventions in Yemen, so we need to liberate it from all countries.”

He stressed that Mansour and other Islah members were only voicing their own opinions and that they didn't represent the party.

Abdulghani has also heard news about Yemeni fighters in Libya, but he did not believe it, saying that it was propaganda against Islah.

“It is true that some wounded fighters left Yemen to receive medical treatment in Turkey, but I don’t believe they joined the fighting in Libya,” he said.

“Yemen has enough fronts and Islah is not stupid enough to send fighters to Libya, seeing that this would create anger in Yemen against the party.”

Left with no choice

The severe economic fallout of the war, including high unemployment, has forced people to join the battles on a multitude of front lines, as it is the only available source of income for many.

'The majority of fighters don’t care about who controls Yemen and they only fight to earn money to provide for their families'
-Nehad Abdul-Jabbar, social expert

“[Becoming a] mercenary is a good choice for Yemenis, and it is a main source of income for many, so we see some fighting with Saudi Arabia, others with the United Arab Emirates, and we may see them fighting with any other country,” Nehad Abdul-Jabbar, a social expert, told MEE.

Abdul-Jabbar believes that the deterioration of the situation in Yemen has led needy people to join the fighting for the sake of money.

“The majority of fighters don’t care about who controls Yemen and they only fight to earn money to provide for their families,” she added.

“For these people, they can stop fighting as soon as they get a job.”

An estimated 80 percent of the population - 24 million people - require some form of humanitarian aid, including 14.3 million who are in acute need, according to UNOCHA.

“Unfortunately, money has become the fuel of the war, so this conflict will continue until the economic situation of Yemenis is better,” Abdul-Jabbar said.