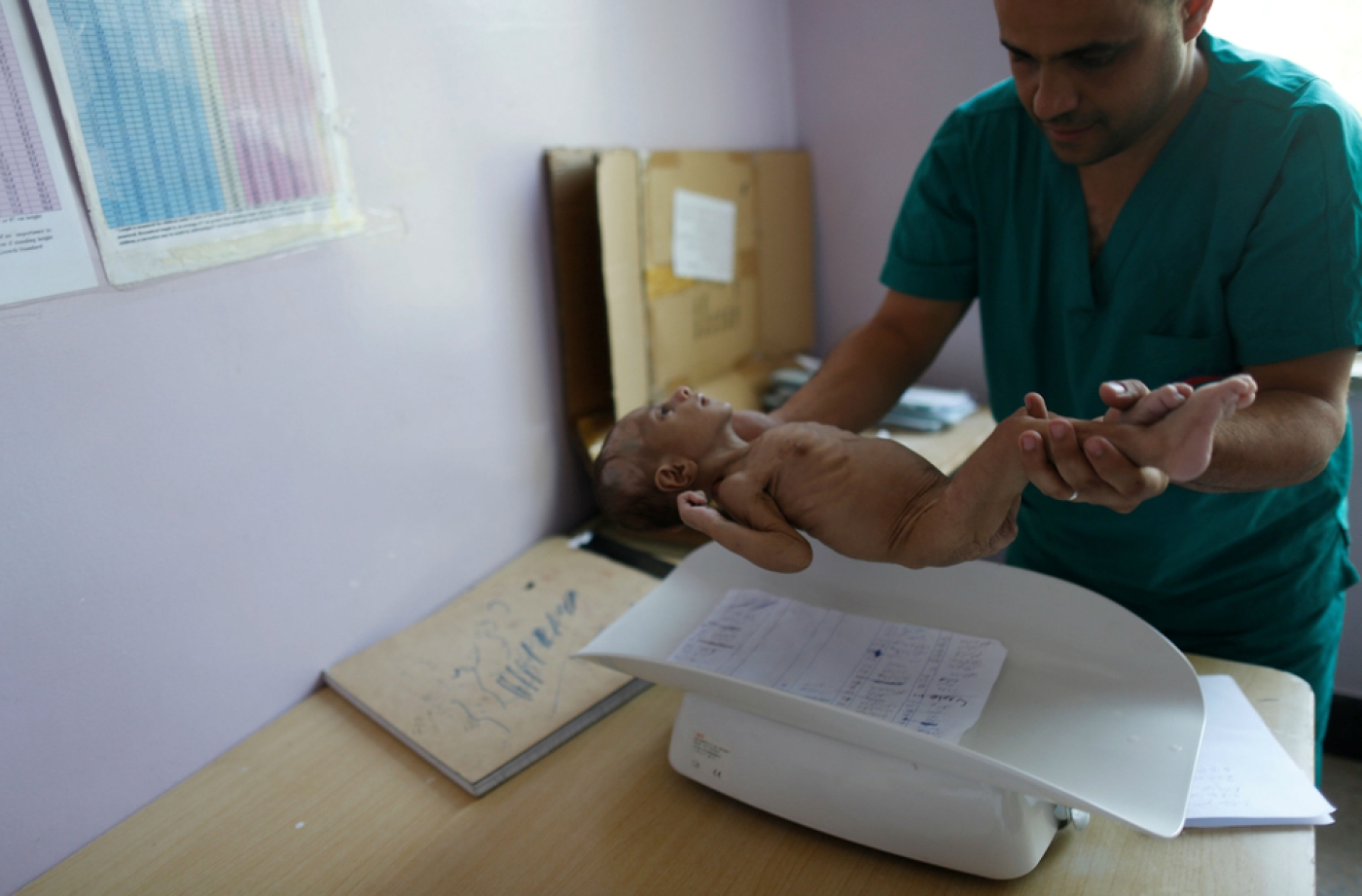 Unicef said more than 11 million children are facing the threat of food shortages, disease and displacement (Reuters)
By
MEE and agencies

In the malnutrition ward of a hospital in the Yemeni capital Sanaa, doctors weigh toddlers with protruding rib cages and skeletal limbs.

Twenty children, most under the age of two, being treated at the ward in Sabaeen Hospital are among hundreds of thousands of children suffering from severe malnutrition in the impoverished country that has been ravaged by a more than three years of war.

"The conflict has made Yemen a living hell for its children," Meritxell Relano, Unicef representative in Yemen, told Reuters news agency.

Relano said more than 11 million children, or about 80 percent of the country's population under the age of 18, were facing the threat of food shortages, disease, displacement and acute lack of access to basic social services.

"An estimated 1.8 million children are malnourished in the country," she said.

"Nearly 400,000 of them are severely acute malnourished and they are fighting for their lives every day."

In addition every year in #Yemen 66,000 children under 5 years of age are dying of preventable diseases. Half of them during birth or in the first month of life and the others of diseases that are preventable such as diarrhea, pneumonia and malnutrition related causes.

Relano said last month that 66,000 children under five die each year in Yemen from preventable diseases, half during child birth or in the first month of life and others from malnutrition related causes.

A coalition of states led by Saudi Arabia, intervened in Yemen's war in 2015 against the Houthi rebels, after the latter drove the government of President Abd Rabbuh Mansour Hadi out of Sanaa.

The coalition has imposed stringent measures on imports into Yemen to prevent the Houthis from smuggling weapons, but the checks have slowed the flow of commercial goods and vital aid into the country.

Saudi Arabia and the United Arab Emirates say they are providing funds and supplies to support aid efforts in Yemen.

The Houthis blame the coalition for choking off imports into the country.

In Sabaeen hospital, a toddler in a diaper lay wrapped in blankets with a tube inserted in the child's nose. Another child cried while being lowered on to a scale to be weighed.

The families of the children declined to speak to the media.

"The situation of the families without jobs, without income and in the middle of the war, is catastrophic," Relano said.

She said Unicef had provided more than 244,000 severely malnourished children under the age of five with therapeutic treatment since the beginning of 2018, in addition to micronutrient treatment to over 317,000 children under five.

"The human cost and the humanitarian impact of this conflict is unjustifiable," UN humanitarian coordinator Lise Grande said in a statement on Thursday.

"Parties to the conflict are obliged to do absolutely everything possible to protect civilians and civilian infrastructure and ensure people have access to the aid they are entitled to and need to survive."

Grande highlighted the situation in the rebel-held port city of Hodeidah, where fighting nearby has raged in recent days as coalition forces seized rebel supply routes into the city.

Hundreds of thousands of civilian lives "hang in the balance," she said, with families living in fear of shelling and air strikes.

"The situation has dramatically deteriorated in the past few days... people are struggling to survive," Grande said.

Doctors and medics in two hospitals in Hodeidah province said on Thursday that 50 people have been killed in the past 24 hours, seven of them pro-government fighters, AFP news agency reported.

More than a quarter of children are malnourished, 900,000 people are desperate for food and 90,000 pregnant women "are at enormous risk", Grande said.

The situation would be exacerbated if the fighting compromises mills and stores in Hodeida province.

"We're particularly worried about the Red Sea mill, which currently has 45,000 metric tonnes of food inside, enough to feed 3.5 million people for a month," Grande said.

"If the mills are damaged or disrupted, the human cost will be incalculable."