United Nations Special Envoy to Yemen, Ismail Ould Cheikh Ahmed, speaks during a press conference at the information ministry in Kuwait City on 26 April 2016 (Source AFP)
By
MEE and agencies

UN-brokered peace talks in Kuwait have collapsed after representatives from the Yemeni government said they will leave on Saturday, signalling the end of four months of indirect negotiations with Houthi rebels.

"Today (Friday), we are holding some farewell meetings... and the delegation will leave on Saturday," delegation spokesman Mohammad al-Emrani told AFP.

"There can be no more talks after the new coup," he said referring to the rebels' formation of a supreme political council to run war-torn Yemen.

The Houthi rebels and the General People's Congress of former president Ali Abdullah Saleh on Thursday jointly announced setting up the 10-member council.

The job of the council would be to "manage state affairs politically, militarily, economically, administratively, socially and in security," a statement issued by the Houthis said.

A UN spokesman in Kuwait, however, said Ould Cheikh Ahmed was scheduled to meet with the rebels later on Friday and with ambassadors of the 18 countries backing the peace process in Yemen.

Indirect negotiations held in Kuwait since April have failed to make headway. Most of the discussions focused on the type of government to run Yemen during a transition period.

"It must be made clear here that it is the Houthi-Saleh alliance that foiled the peace talks in Kuwait. They have shown that they were never serious about a peaceful settlement," Emrani said.

A top aide to President Abd Rabbuh Hadi said on Thursday that the government considered the peace talks had wound up without agreement.

"The negotiations have completely ended," said Abdullah al-Olaimi, deputy director of the president's office and a member of the government delegation.

Senior officials in President Abd-Rabbu Mansour Hadi's government said the move by the Houthis and Saleh's party to create a governing council undermined diplomatic efforts to end a devastating civil war that has drawn in a Saudi-led Arab coalition and caused a humanitarian crisis.

Since the civil war began, 2.8 million people have been displaced and more than 80 percent of the population urgently needs humanitarian aid, according to UN figures.

More than 6,800 people have been killed in Yemen since the Saudi-led coalition intervened in support of Hadi's government.

Amnesty International said last year that all sides have left a "trail of civilian death and destruction" and may have committed war crimes. 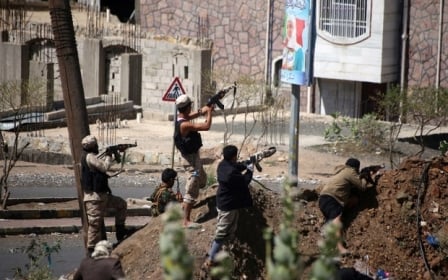