Announcement of the 42-member body headed by Abdel Aziz bin Habtoor, a former governor of Aden, is likely to provoke a strong response from the government of President Abd Rabbuh Mansour Hadi, whose forces have been battling the Houthi rebels and their allies since 2014.

It could also be a gesture of defiance aimed at the United Nations and United States, which continue to advocate a national unity government that would include rebels and representatives of the Hadi camp.

The new cabinet was announced by the "supreme political council" which was established earlier this year by the Houthis and their allies, supporters of former president Ali Abdullah Saleh.

It came after UN envoy Ismail Ould Cheikh Ahmed met the rebels in Muscat last week and was scheduled to meet Hadi in Aden, the southern port city and temporary seat of the internationally recognised government.

A previous round of peace talks held in Kuwait collapsed in August, and a 48-hour ceasefire declared by the coalition ended last Monday with little success in reducing the violence.

Releasing the government line-up on Monday, the rebels said they were responding to Hadi's "stubbornness" in continuing the war with the backing of the Saudi-led Arab coalition that intervened in March 2015.

Saleh supporters have been given the defence, interior and foreign ministries and the Houthis the portfolios of petroleum, finance, information, education and justice, according to the rebels' sabanews.net website.

The United Nations says the war in Yemen has killed more than 7,000 people and wounded nearly 37,000 since March last year. 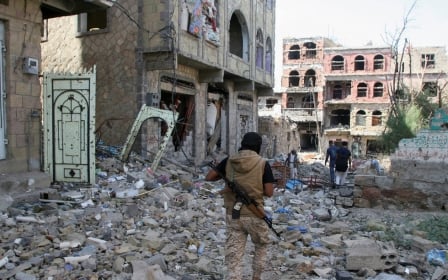