Yemen's premier sworn in as vice president to 'restore stability'

Khaled Bahah is seen as enjoying 'good relations with numerous local and international parties', to boost confidence in 'legitimate leadership' 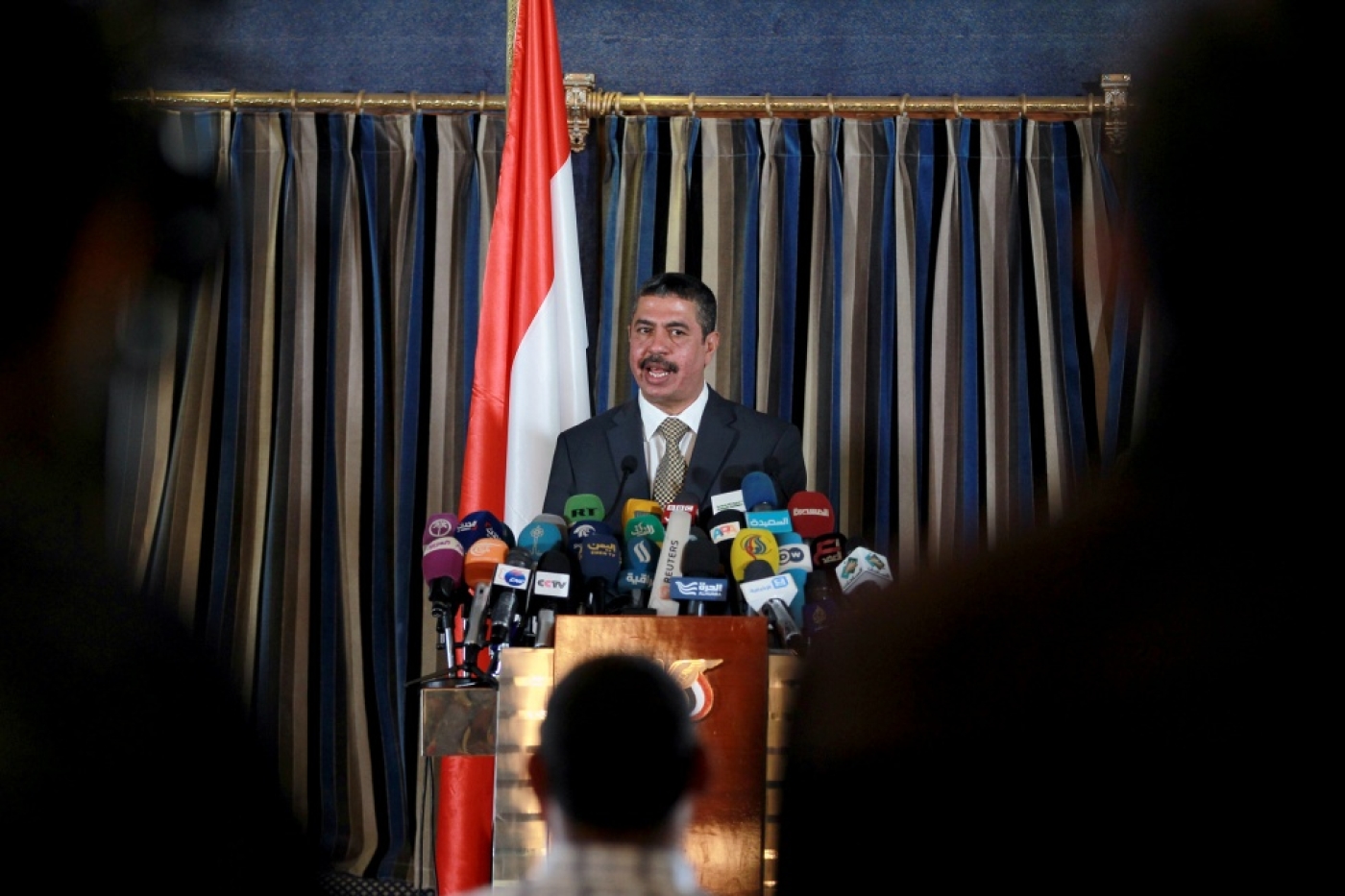 Yemen's Khalid Bahah in the Presidential Palace on 9 November, 2014 in the capital Sanaa (AFP)
By
MEE and agencies

Yemen's Prime Minister Khaled Bahah was sworn in as vice president on Monday at the country's embassy in Riyadh, as a Saudi-led coalition pressed on with its air campaign against Yemeni militia.

The Gulf Cooperation Council welcomed Bahah's appointment as an important step towards helping Hadi's efforts to "restore security and stability in Yemen".

The bloc which groups Saudi Arabia with Bahrain, Kuwait, Oman, Qatar and the United Arab Emirates pledged to "continue to support all efforts" to push for a political solution in Yemen.

Both Hadi and Bahah had been placed under house arrest in Sanaa by Shiite Houthi militia who overran the capital in September and tightened their grip on power after the two leaders tendered their resignations in January.

But while Hadi escaped in February to resurface in Aden, Bahah reached a deal with the Shiite militia to end his house arrest in March.

He headed to Hadramawt, his native province in the southeast.

"The appointment of someone who enjoys good relations with numerous local and international parties as vice president will boost the confidence of Yemeni people in their legitimate leadership," a senior Yemeni official, requesting anonymity, explained the move to the Anadolu Agency.

"Hadi's image had been shaken as wide segments of Yemenis perceived him as being lenient towards the Shiite Houthi group before they overran capital Sanaa and undermined the president's legitimacy, and took over government institutions," the source said.

The source went on to note that "Bahah enjoys consensus among Yemenis and is neither rejected by the Houthis nor by their allied [ousted President Ali Abdullah] Saleh, according to their public statements, which is confirmed by the fact that Bahah did not sneak out to escape his house, unlike Hadi, but left Sanaa in public after receiving a formal apology from the Houthis."

Another Yemeni official, who declined to be named, told AA that Bahah's appointment as VP will "provide support to the [Saudi-led military] coalition in international circles, as he is relatively young and enjoys wide contacts with many of countries and can move easily from one country to another to explain the standpoint of Yemen's legitimate leadership, unlike the ailing Hadi."

On 24 March, Bahah reportedly travelled to New York where his family lives, as the militiamen tightened the noose on Aden, two days before Saudi Arabia mounted an air campaign in support of Hadi.

He flew earlier this month to Riyadh where Hadi has taken refuge as fighting raged in Aden.

Bahah studied administration and finance in his home country as well as India. He held the post of oil minister between 2006 and 2008, before serving as ambassador to Canada until 2014.

He returned to the oil ministry for a few months, before briefly becoming Yemen's envoy to the United Nations in New York, and Bahah was then appointed prime minister in October 2014.

At least 22 Shiite Houthi militiamen and ten armed tribesmen were killed in clashes on Sunday in the eastern Yemeni province of Maarib, tribal sources have said.

According to the sources, tribesmen backed by army troops loyal to President Hadi had clashed with Houthi militants in Maarib's Sirwah directorate.

At least 22 Houthis were killed and many others were captured in the clashes, the sources, requesting anonymity, told AA.

Ten tribesmen were also killed in the fighting, they added.

Humanitarian groups have struggled to bring aid into the country and said on Monday the situation in Aden was deteriorating rapidly.

"Shops are closed. We have a problem of food," said Marie-Elisabeth Ingres, the Yemen representative of Doctors Without Borders (MSF).

Metaz al-Maisuri, an activist living in Aden, said basic services had stopped and there had been a "mass exodus" of civilians from the city.

"Schools, universities and all public and private facilities have been shut due" to the violence, he told AFP.

"Residents' lives have become very difficult and complicated... They can no longer obtain the food they need," he said.

"We are unable to leave our houses to buy what we need because of the Houthi snipers," said Adwaa Mubarak, a 48-year-old woman in Aden.

"Our living conditions are bad. Bakeries are shut," she said, alleging that several people have been shot dead as they queued to buy bread.

"There is a food and water shortage. People are unable to move," said Marie Claire Feghali, the Red Cross spokeswoman in Yemen.

The International Committee of the Red Cross flew more than 35 tonnes of medical aid and equipment into Sanaa on Saturday, after the first aid deliveries on Friday organised by the Red Cross and United Nations.

Saudi Arabia calls on Iran to end support of Houthis

Saudi Arabia has called on Iran to end its support for the Houthi militia, accusing Tehran of assisting "criminal activities" in Yemen and providing weapons and aid to the militiamen.

Iran has denied arming the Houthis and Supreme Leader Ayatollah Ali Khamenei has condemned the coalition's raids in Yemen as "criminal".

Saudi Foreign Minister Saud al-Faisal said on Sunday that his country was not at war with Iran.

"We are not at war with Iran," al-Faisal said in a joint press conference with French Foreign Minister Laurent Fabius in Riyadh.

He said that Riyadh and its allies have launched a military campaign against the Houthis to defend legitimacy in Yemen.

"We are fighting alongside a country that has asked for our help to defend legitimacy and halt a war launched by the Houthis to occupy Yemen," he said.

"We have heard nothing from Iran in regard to Yemen's development," al-Faisal said.

"We only hear from Iran in case of problems. They are doing nothing but to prolong the conflict there."

The Houthis, for their part, have described the offensive as unwarranted "Saudi-American aggression" against Yemen.

The conflict has raised fears of regional instability.

Al-Qaeda militants have taken advantage of the chaos to seize control of some areas, including the capital of one Yemeni province.

Before the escalation, Washington carried out a longstanding drone war against the local Al-Qaeda branch in Yemen.

Meanwhile, a local official has been gunned down by Houthi militiamen in the southern Yemeni province of Aden, security sources said.

According to the sources, Houthi snipers opened fire on local citizens in Crater district in Aden, killing Daram Saboula, a local municipal official in the neighbourhood.

Aden is the main stronghold of President Hadi who fled to Saudi capital Riyadh late last month after Houthi militants struck his residence in the city.

Islamabad will "intensify" efforts to find a diplomatic solution to the Yemen conflict, Pakistan's prime minister said on Monday, after parliament voted to keep the country out of the Saudi-led coalition against the Houthi militia.

Nawaz Sharif said the restoration of Hadi's government would be an "important step forward towards establishing peace".

"Pakistan will intensify its diplomatic efforts in the coming days, in consultation with the leadership of Saudi Arabia, to resolve the crisis," Sharif said in a statement delivered to television cameras.

Meanwhile, Algeria has been working for a week now to formulate a new initiative for inviting Yemen's warring rivals to engage in peace talks, an Algerian diplomat said on Monday.

"[The initiative] calls for direct talks between the Yemeni legitimate government and Houthis and their allies," the diplomat told AA.

According to the source, Algeria has notified the two sides that it was ready to sponsor negotiations between them with the aim of restoring peace to Yemen.

He did not say, however, whether the warring parties have agreed to the Algerian proposal.

"The initiative calls for holding talks based on respect for constitutional legitimacy and the participation of all Yemen's influential parties," the diplomat said.

"The fact that Algeria is a neutral party can give assurances to regional players in the Yemeni crisis; namely Saudi Arabia and Iran," he said.

Meanwhile, a pro-Houthi spokesman on Monday vowed to respond to the Saudi-led military campaign.

"Our response is coming," Sharaf Luqman told a press conference in capital Sanaa.

"We will decide the time and the place of our response," he added.

According to President Hadi, unrest in Yemen is being driven by "Iran's hunger for power," urging Houthi militiamen to sit down at the negotiating table.

"My country, Yemen, is under siege by radical Huthi militia forces whose campaign of horror and destruction is fuelled by the political and military support of an Iranian regime obsessed with regional domination," Hadi wrote in an op-ed in the New York Times.

"There is no question that the chaos in Yemen has been driven by Iran's hunger for power and its ambition to control the entire region."

Hadi called for "continued international support to ensure military might on the battlefield now."

"Two weeks ago, Yemen was on the brink of the abyss," Hadi wrote.

"The unprecedented level of Arab and international support brought us back from the edge," he added, referring to the Saudi-led coalition.

"The message they are sending is clear: Iran cannot continue expanding at the expense of the integrity and security of other countries in the region," Hadi added.

He stressed he had asked for the coalition's help, and warned "if the Houthi do not withdraw and disarm their militia and rejoin the political dialogue, we will continue to urge the coalition to continue its military campaign against them."

But the Yemeni president also called on the militia to come to talks about the Gulf country's future.

"It is not too late to stop the devastation of my nation. The Houthi belong at the negotiating table, not on the battlefield terrorizing their fellow citizens," Hadi said.

"Their ambition should be to establish a secure and stable Yemen."

He maintained that Yemen should press ahead with implementing a new constitution and transition to a new parliament representing both the north and south of the country.

And Hadi blamed former president Ali Abdullah Saleh for refusing to "follow the roadmap for change," adding he "must take responsibility for anarchy in Yemen and call a halt to the needless bloodshed."