A Yemeni reads a local newspaper whose frontpage shows President Abedrabbo Mansour Hadi on February 22, 2015, in the capital Sanaa (AFP)
By
MEE staff

Yemen's embattled former president Abd Rabbuh Mansur Hadi reasserted his claim to the presidency on Saturday after escaping house arrest in Sanaa and fleeing to Aden,  labelling as a coup the grab for power by Shiite Houthi rebels who had held him.

Hadi, who resigned last month after Houthi militiamen surrounded his residence and overran the presidential palace, was sneaked out of his compound in Sanaa on Friday night by his bodyguards, and later made it to the main southern port city of Aden, an aide told Middle East Eye.

His supporters there have refused to recognise the authority of a new presidential council set up by the Houthi militia to replace him. Hadi himself called on world powers to "reject the coup".

Worth noting: according to #Yemen's constitution, Hadi is still president, since he hasnt formally submitted his resignation to parliament.

In a statement, signed as president, he said all measures taken by the Houthis since they seized Sanaa in September, including the capturing of army bases and the establishment of checkpoints throughout the city, were "null and illegitimate".

It was the strongest statement against the Houthis yet by Hadi, who was ushered into power in 2012 after mass protests ended the 33-year reign of Ali Abdullah Saleh, and has raised the prospect that the already fractured nation may soon be ruled by two competing governments.

An aide said Hadi will call on parliament to meet in Aden, the hub of a separatist movement, as powerful tribes in other southern provinces that remain out of the control of the Houthis urged him to declare Sanaa an "occupied city".

The president called for the UN-backed national commission overseeing Yemen's post-Arab Spring democratic transition to create a federation to convene, saying it should meet in Aden until Sanaa "returns as a safe capital for all Yemenis, and the withdrawal of all armed militia".

Hadi also demanded an end to the "house arrest" of former prime minister Khalid Bahah and other officials, urging Arab states and the UN Security Council to "protect the process in Yemen... and not to legitimise the coup in any way." When Hadi and Bahah resigned in January, parliament reportedly refused to accept the resignations.

Newspapers in Yemen on Sunday bore conflicting accounts of how exactly Hadi eluded the Houthi gunmen surrounding his heavily fortified residence in the capital. A piece by the editor of a pro-Houthi television channel said Hadi's physician had facilitated the escape by disguising Hadi in women's clothing. Another said Hadi escaped in a food truck.

A source in the presidential force told AFP that Houthi gunmen at Hadi's Sanaa residence were tricked into looting a vehicle carrying arms while the president was sneaked out of a back gate.

The aide insisted that Hadi left "without an arrangement or even informing any of the political parties".

Hadi is a southerner who spent nearly three decades in the north, serving as defence minister and vice president. Seen by many as a political lightweight before taking the presidency in 2012, he surprised observers by asserting himself as president and removing Saleh's relatives from key positions in the army.

He has always defended the 1990 union of the north with the formerly independent south, where secessionist sentiment has risen sharply.

Most troops and militia in the area of Aden have pledged allegiance to him, and his supporters hailed his arrival in the former southern capital as a game-changer.

Yemen's central third city of Taiz, which, unlike most of northern Yemen is outside Houthi control, saw mass street protests on Sunday as people marched in support of Hadi.

"I am marching against the Houthis because they stole our revolution," said Ahmed Mansour, one of thousands who took to the streets in Taiz. "We marched in 2011 for a civil government, for accountability, [and] we want our country back from these thugs," he said.

The rallies on Sunday came after one protester was shot dead and another severely wounded in the nearby city of Ibb on Saturday when supporters of the Houthis opened fire on a demonstration against the rebels, according to a medical source and a journalist who witnessed the march.

The Houthis have been accused by activists and the human rights group Amnesty International of systematically targeting peaceful protesters with death threats, abductions and severe beatings.

The increasingly brutal tactics, they say, are meant to halt demonstrations that erupted after the Houthis toppled Yemen's government last month and then dissolved parliament. But the knifings and other violent measures appear to be having the opposite effect. Rallies against the Houthis have increased in frequency and size, heightening concerns that the country is heading for all-out civil war.

The Houthi militiamen, who are backed by Iran and whose power base is in Yemen's mainly Shiite northern highlands, overran the capital unopposed in September.

Taiz, Ibb and some other parts of the north, as well as the whole of the south, remain largely beyond the militia's control. 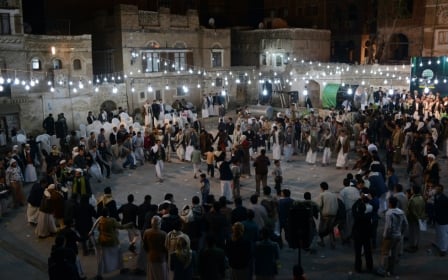