Yemenis loyal to former president Ali Abdullah Saleh (on the poster) rally in Sanaa on 7 November, 2014 (AFP)
By
AFP

Three years after quitting Yemen's presidency following a bloody protest crackdown, Ali Abdullah Saleh is seen as the man pulling the strings as rebels advance on his successor's southern haven.

The rapid offensive of the Shiite Houthi rebels, who have moved into central and southern Yemen since overrunning the capital Sanaa in September, would have been impossible without Saleh's support, according to analysts.

"The balance of power on the ground is in favour of Saleh and the Houthis, but more for Saleh," said Mustafa Alani, a security expert at the Gulf Research Centre.

The Houthi and pro-Saleh forces "have taken control of all of the capabilities of the Yemeni army," said Alani.

An expert report submitted last month to the UN Security Council alleged that Saleh provides "direct support" to the Houthis through funding and the acquiescence of elite forces still under his influence.

"The Houthis are puppets in the hands of Saleh," Yassin Makkawi, an adviser to Hadi, told AFP.

After three decades of iron-fisted rule, Saleh ceded power in February 2012 under a Gulf-brokered deal that granted him immunity from prosecution, ending a bloody year of protests demanding his ouster.

But he has been accused of undermining his successor, Abedrabbo Mansour Hadi, who in February took refuge in the southern city of Aden having escaped house arrest in the Houthi-controlled capital.

As they edge closer to Aden, it has become clear the bulk of the forces heading south are military, rather than the Houthi rebels who hail from the northern mountains, according to local officials.

And at times it has been apparent that some officers have acted under Saleh's influence, allowing the rebels to capture territory or military positions without a single shot being fired.

"There are certainly orders in the chain of command that can be traced back to Saleh," said Laurent Bonnefoy, a specialist on Yemen.

Although he is a member of the Zaidi sect of Shiite Islam to which the Houthis belong, Saleh waged six wars against the Shiite movement in northern Yemen between 2004 and 2010.

Despite this, "there are numerous indications that Ali Abdullah Saleh has aligned himself with the Houthis to destroy the power base and property of his enemies," said the expert report submitted to the UN.

Saleh, 73, is a survivor who lived through civil war, rebellion in the north, an Al-Qaeda insurgency in the south and a bomb attack on his palace in June 2011 that badly wounded him.

A smart tactician who portrayed himself as a "saviour" after signing the Gulf deal that ended the year of bloody protests, Saleh once compared ruling Yemen to "dancing on the heads of snakes".

After stepping aside in 2012, he refused to go into exile and remained at the head of his General People's Congress (GPC), the party to which his successor also belongs.

The former strongman continues to play a public role.

This month the GPC organised protests in which hundreds took to the streets of the Houthi-controlled capital to call for a presidential election and demand Saleh's son, Ahmed, run as a candidate.

According to the UN report, Saleh amassed through corruption between $32bn on and $60bn during his 33 years in power in a country that is one of the Arab world's poorest.

The 15-member UN Security Council in November imposed sanctions including a freeze on assets that Saleh is believed to have stashed away in at least 20 countries.

Saleh rose to the presidency of North Yemen in 1978 and his main achievement remains the reunification of the country 12 years later. 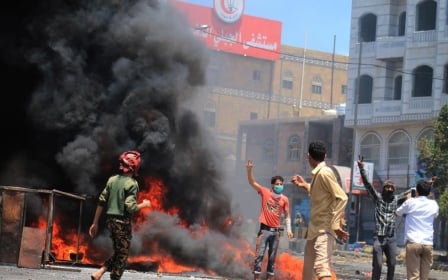