Jonathan Steele
The EU has been courageous to stick by Iran in the face of Trump. But its stance towards a key human rights review in the breakaway region of Georgia has been pathetically weak 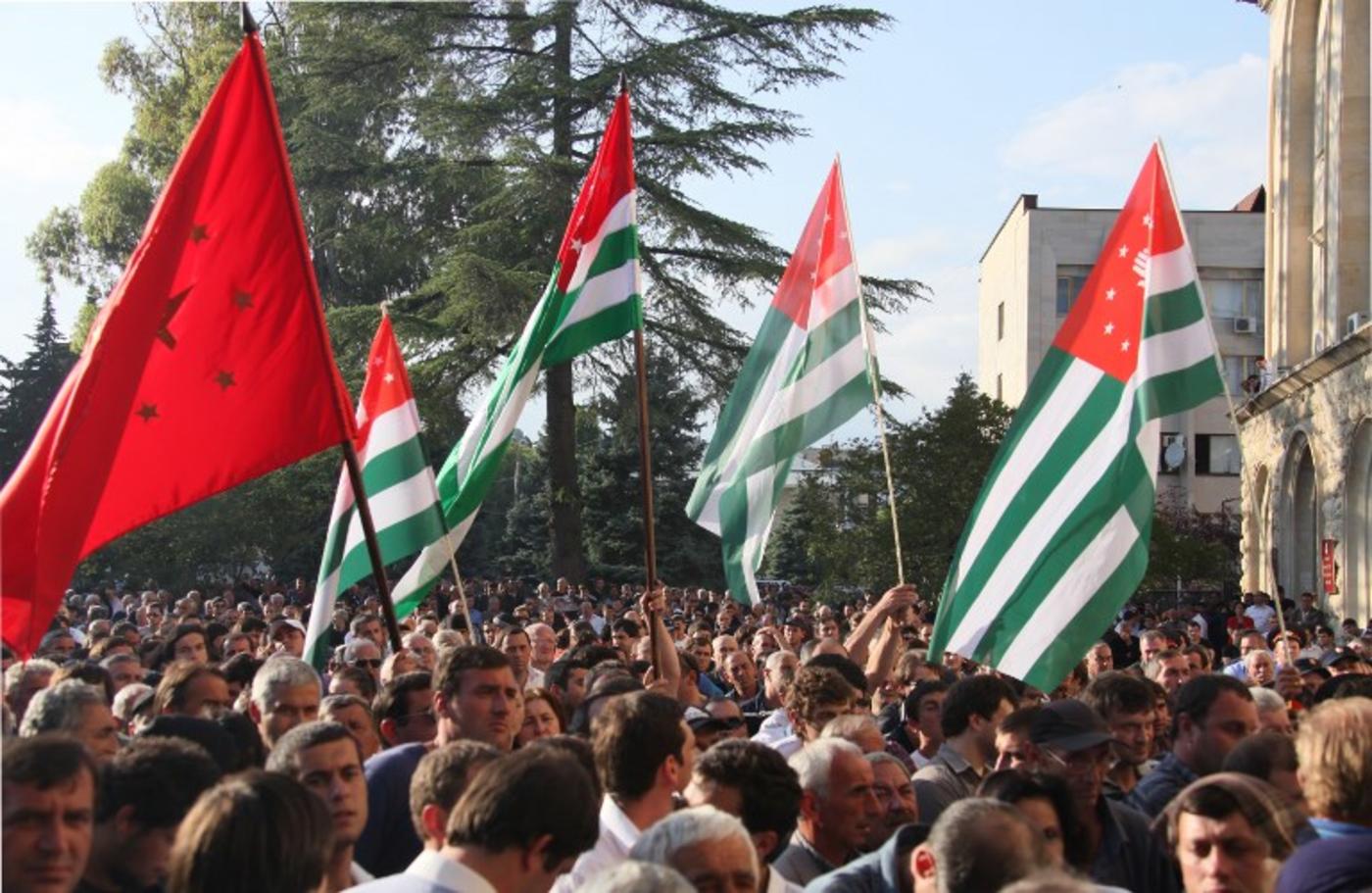 To the great credit of the European Union, its high representative for foreign affairs and security policy, Federica Mogherini, attended the recent inauguration of Iran’s president, Hassan Rouhani. As Donald Trump increases his attacks on the nuclear deal which the US and the EU, along with other leading states, signed in 2015, it took courage for the EU to take part in the ceremonies in Tehran. It was a welcome act of defiance for which the EU has not been given enough recognition.

According to leaks to the US media, Trump is preparing to denounce the deal which his predecessor, Barack Obama, strongly encouraged. He plans to accuse Iran - without any evidence - of violating the deal’s terms. Although he likes to act impulsively and on his own, Trump would no doubt welcome support from Europeans. Mogherini’s courage in showing the EU is not going along with Washington’s line, and by implication the forthcoming fabrications about alleged Iranian violations, is to be applauded.

A pity, then, that on another issue - admittedly of much less international weight than relations with Iran - the EU foreign policy team has turned out to be pathetically weak. It concerns EU policy in its eastern neighbourhood along the Black Sea.

Some 18 months ago, with the agreement of Helga Schmid, the secretary general of the European External Action Service, an independent expert was asked to conduct a review of human rights in Abkhazia, a breakaway region of Georgia, by Ambassador Herbert Salber, the EU’s special representative for the South Caucasus and the crisis in Georgia.

The chosen expert was Thomas Hammarberg, a Swedish diplomat of great integrity who worked for six years as the Council of Europe commissioner for human rights. The mission was approved by the UN and the Organisation for Security and Co-operation in Europe who are co-chairs with the EU in conducting talks in Geneva on the consequences of the 2008 conflict in Georgia, which led, after Russian military intervention and a short war with Georgian forces, to South Ossetia and Abkhazia declaring independence.

It was agreed by all parties that the report would be published, and everyone interviewed for it, whether officials or private citizens, knew it was to be public. Hammarberg teamed up with Magdalena Grono, an expert on the South Caucasus from the International Crisis Group. They made six visits to Abkhazia, each time traveling through Tbilisi, the Georgian capital, where they met Georgian officials.

It was agreed by all parties that the report would be published, and everyone interviewed for it, whether officials or private citizens, knew it was to be public

The agreed approach was what Hammarberg calls “strict status-neutrality”. Without it, no investigation would have been feasible, he says. The report would not take a position on rival claims to Abkhazia, whose declaration of independence has only been recognised by Russia and two other countries. The EU has not recognised the breakaway region. It insists on the sovereignty and territorial integrity of Georgia.

The report’s aim was to investigate the state of human rights in Abkhazia and recommend potential improvements which could be implemented immediately whatever steps may be taken later about ending the conflict. As the report puts it even-handedly: “The view from Tbilisi emphasises Russian aggression, and sees the conflict mainly as Georgian-Russian, and Abkhazia as occupied. Moscow disagrees and points out that the pre-existing Georgian-Abkhaz conflict of the 1990s is at the core of the problem, and it offers to act as a guarantor of security. The view from Sukhumi [the Abkhaz capital] is largely aligned with the Russian version; some in Sukhumi even say there no longer is a conflict as Abkhazia’s status has been resolved thanks to Russian recognition in 2008. While there is broad consensus in Sukhumi that Moscow is a key partner, there is also a concern among some people that Abkhazia may be assimilated into the Russian space.”

The EU-sponsored study on human rights in Abkhazia is the most comprehensive that any outside body has ever done on the subject. It looked at gender issues, housing discrimination, prison conditions, language teaching in schools, and restrictions on the freedom of movement of people across the border into Georgia proper, a problem which particularly affects the Georgian minority in the Gali district of Abkhazia, many of whom fled to Georgia during the 2008 war and have since returned.

Some improvements occurred during the team’s work. An ombudsman was appointed, who seemed to work independently of the authorities. Some regression also happened. A law banning abortion except in a few circumstances was passed.

'The broke their promise'

The report’s first draft was given to the EU early this year. They circulated it to the rival sides in Tbilisi, Sukhumi and Moscow. The Georgian Foreign Ministry angrily condemned the status-neutral approach. Officials wanted every mention of Abkhazia to be “Abkhazia, Georgia”, and the treatment of Georgians to be described as “genocide”. They objected to discussion of de facto Abkhaz legislation on various aspects of human rights in Abkhazia, claiming this gave an air of legality to an occupation.

Getting this report into the public domain seems to have mattered less to the Georgian Foreign Ministry, and the EU external action service, than well-rehearsed arguments over the origins of the war and the status of the breakaway territories

According to Hammarberg, the Georgian foreign ministry lobbied hard against the report. Taking advantage of the generally hostile current Western attitude to Russia, they mobilised Poland and the Baltic states to press for the report’s suppression.

Helga Schmid, secretary general of the external action service, who was taking the lead in the EU on the issue, decided not to publish the report but shelve it for use as “an internal working document”. Schmid was unavailable for comment but Oliver Dajic, her political assistant, acknowledged in an email to Middle East Eye that the primary goal of the study was “to raise awareness regarding human rights in Abkhazia”. He declined to give reasons why Schmid refused to make the report public.

It looks like a case of inconsistency and cowardice. “What is interesting is that they back off under pressure, even from an EU non-member state. It’s not a good sign. They broke their promise," Hammarberg told MEE.

“The foreign ministry in Tbilisi is a hangover from the time of [former president] Mikheil Saakashvili. The current president has suggested he wants to review the whole Abkhazia issue and provoke a debate. The foreign ministry people are extremists. Perhaps they thought they would lose power," he added.

Ironically, the suppressed report’s biggest point of criticism concerns the fate of the Georgian returnees to the Gali district of Abkhazia. Their severe problems in schools, housing, the return of seized property, and identity papers were comprehensively itemised in the report. But getting this into the public domain seems to have mattered less to the Georgian foreign ministry, and the EU external action service, than well-rehearsed arguments over the origins of the war and the status of the breakaway territories.

Refusing to be silenced, Hammarberg and Grono have updated their report and published it on the website of Sweden’s Olof Palme International Centre, where Hammarberg was for time secretary general.

Image: Opposition protesters rally in front of the presidential office in Sukhumi, the capital of the Georgia's breakaway republic of Abkhazia, in May 2014 the day after demonstrators stormed the presidency in what the leader of Abkhazia called a coup attempt (AFP) Refugees
From Syria to Abkhazia: A Syrian woman’s journey Diplomacy
So far, Iran has endured Trump's hostility. That patience will run out
Ellie Geranmayeh