It's the economy - not democracy - that no longer works for Arabs

Mohamad Elmasry
The findings of a major new survey on the Arab world, including Arab attitudes towards democracy, should be taken with a grain of salt 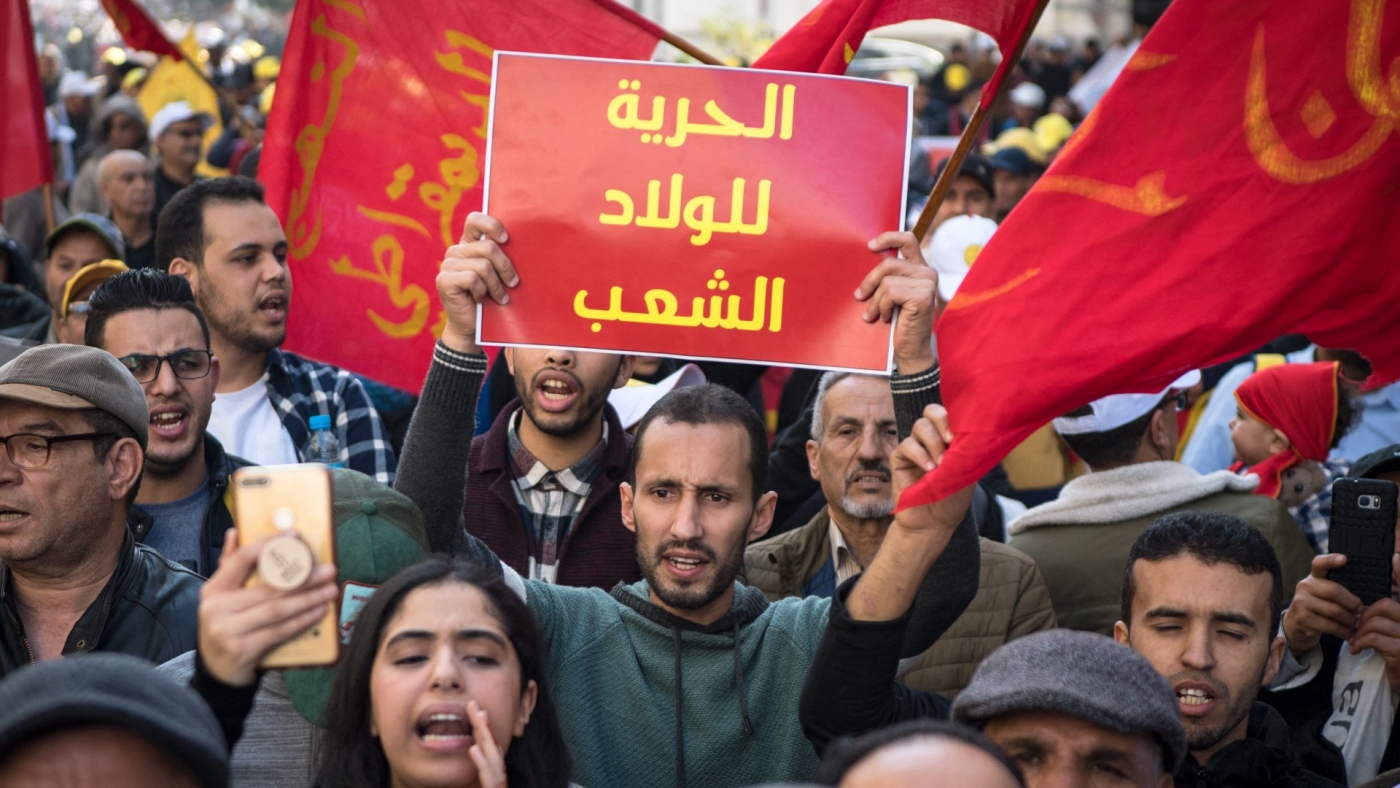 Protesters take part in a demonstration against poverty and the economic situation, called for by the Moroccan Social Front movement, in Casablanca on 23 February 2020 (AFP)

At first glance, the 2022 results suggest at least some meaningful change in the Arab street. In particular, one finding suggests an interesting departure from past surveys: that more Arabs now believe that democracy is a weak predictor of a nation’s economic success.

The finding was prominently highlighted by the lead researchers as well as several news outlets, including BBC, Morocco World News, and Saudi Gazette.

If valid, the result is undoubtedly significant. The finding, however, should be taken with a grain (or two) of salt.

It has been pointed out elsewhere that the items in the survey are framed in such a way as to elicit a particular set of responses.

This is an accurate, important critique of the survey, especially since survey methodologists routinely caution against so-called "leading questions".

Arab Barometer items about democracy - and particularly items about democracy and economic performance - are mainly negative-facing. The section of the survey at issue presents four key statements, to which respondents are asked to indicate their level of agreement on a four-point Likert scale.

It is useful to know that Arabs in 2022 provided different, more negative responses about the economic capacity of democracy than Arabs in 2018

Although the fourth statement may be seen as relatively neutral, the first three are clearly negative-facing, and arguably nudge respondents to make negative evaluations. However, it is important not to overstate this case.

While these leading statements may be somewhat problematic at face value, the same items have been asked over time, a fact that allows for more or less direct data comparisons.

At the end of the day, it is useful to know that Arabs in 2022 provided different, more negative responses about the economic capacity of democracy than Arabs in 2018. The information is useful despite the fact that items are leading. After all, the items were also leading in 2018, when the same wording was used.

A more critical issue concerns the likely driver/motives for more negative Arab perceptions of the economic capacity of democratic systems of government, and whether it is possible that Arabs have simply become more economically pessimistic vis-à-vis all forms of government. From liberal West to Russia and China: How the Arab world lost the battle for democracy
Read More »

This possibility is significant because it would seem to undercut the survey write-up’s main claims about Arab perceptions of economic performance under democracy.

It seems logical to think that - political system aside - Arabs would be more economically pessimistic today than a few years ago.

The global economic downturn, which has more or less coincided with the October 2021-July 2022 survey administration dates, has caused widespread economic pessimism elsewhere, including in democratic societies like the United States.

Thus, it is possible, perhaps even likely, that recent global economic trends have caused surveyed Arabs to become more pessimistic about economic growth and performance in general, regardless of the form of government in question.

In other words, pessimistic attitudes about the economic capacities of democracy may be more of a commentary on current economic conditions than anything else.

This possibility seems consistent with the rest of the survey’s findings, and also, I would argue, some basic common sense.

According to the 2022 Arab Barometer surveys, a majority of surveyed Arabs continue to indicate very favourable views of democracy overall.

As the researchers note: "Yet, despite growing concerns about the effectiveness of democracy, citizens in MENA have not completely given up on this political system. Substantial majorities still believe that regardless of its shortcomings, democracy remains the best system. Demonstrating an even deeper commitment to democracy, majorities also affirm that it is the only viable political system in nearly all the countries surveyed."

Isn’t it natural to conclude that Arab frustrations about poverty have more to do with the authoritarian systems in which they are mired?

Why would Arabs hold very favourable views about democracy as a system but single it out for criticism on purely economic grounds?

It seems more likely that the survey’s overarching economy-related finding is more a reflection of the current economic mood than anything else, and that similarly critical, negative responses may have been provided had the survey presented identical statements/questions about other forms of government (a point to which I will return later).

Purely from the standpoint of logic and common sense, why would citizens in non-democratic Arab countries suddenly, in 2022, develop increased negative perceptions about the economic capabilities of democracy, despite not having had direct experience with democracy since the last survey was administered?

On what basis, for instance, would Moroccans hold more negative views about the economic capacity of democracy in 2022 than they did a few years ago?

Arab Barometer director Michael Robbins told BBC, which commissioned the survey: “There’s a growing realisation that democracy is not a perfect form of government… What we see across the region is people going hungry, people need bread, people are frustrated with the systems that they have.”

Comment: totally understandable & music to the ears of Arab despots (& their Western backers) but it doesn't stand up to critical scrutinyhttps://t.co/DVeUhRuGXU@Khalilalanani @RamiKhouri @sarahleah1 @mehdirhasan @glcarlstrom

But this short statement raises more questions than it answers: did Arabs ever believe that democracy was a perfect form of government?

What does the fact that Arabs are “frustrated with the systems they have” have to do with democracy, which is a system that Arabs (mostly) don’t have? Isn’t it natural to conclude that Arabs' frustration about poverty has more to do with the authoritarian systems in which they are mired?

It seems likely that the negative, critical responses highlighted by the researchers and news outlets were a reflection of the current economic mood, and that responses about economic performance would have been equally critical, perhaps even more critical, regarding other forms of government.

It is worth pausing here to stress the fact that the survey’s items about economic performance single out democracy as a form of government, and do not ask similar, mirror questions about other forms of government.

The exclusion of other forms of government is curious, particularly given the fact that most Arabs do not live in democracies. There are other reasons to treat the 2022 Arab Barometer results cautiously. As the researchers note, the survey only presents data on 10 out of 22 Arab countries, making generalisation about “Arabs” tricky.

Moreover, and significantly, generalising even about citizens in the 10 countries under study is made extremely difficult by the fact that researchers were forced to exclude critical questions in two countries, Egypt and Mauritania, because government authorities there deemed the questions too sensitive.

In particular, the exclusion of critical questions in Egypt, far and away the Arab world’s most populous country, constitutes a major research limitation.

The 2022 Arab Barometer survey provides some useful data, but arguably raises more questions than it answers.

Results must be treated with interpretive care. The dominant interpretations of the researchers and news outlets could lead some to believe that Arabs no longer care so much about democracy. For reasons I have touched on here, however, this could be a dubious and dangerous conclusion.

The story of Arab public opinion will undoubtedly continue to unfold in the months and years to come.

There is little doubt that a majority of Arabs are both frustrated with authoritarianism and desperate for viable political and economic systems.

Given some of the well-known challenges associated with public opinion polling in the Arab region, we may have to wait some time before we get a more perfect gauge of Arab public opinion.

We may have to wait until the next Arab Spring. 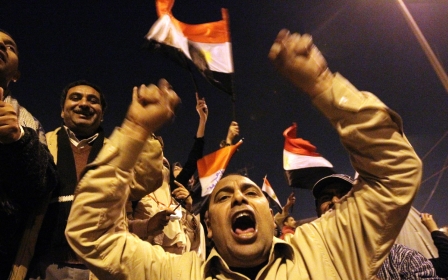 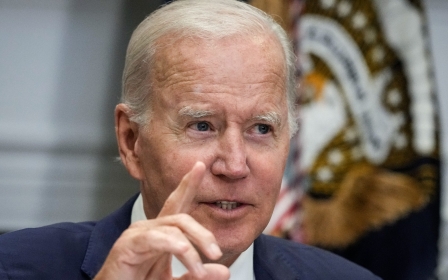