The arson attack that set Israel on fire

Meron Rapoport
The killing of a Palestinian baby shocked an Israeli society blind to Palestinian suffering, but moral indignation is just part of the story 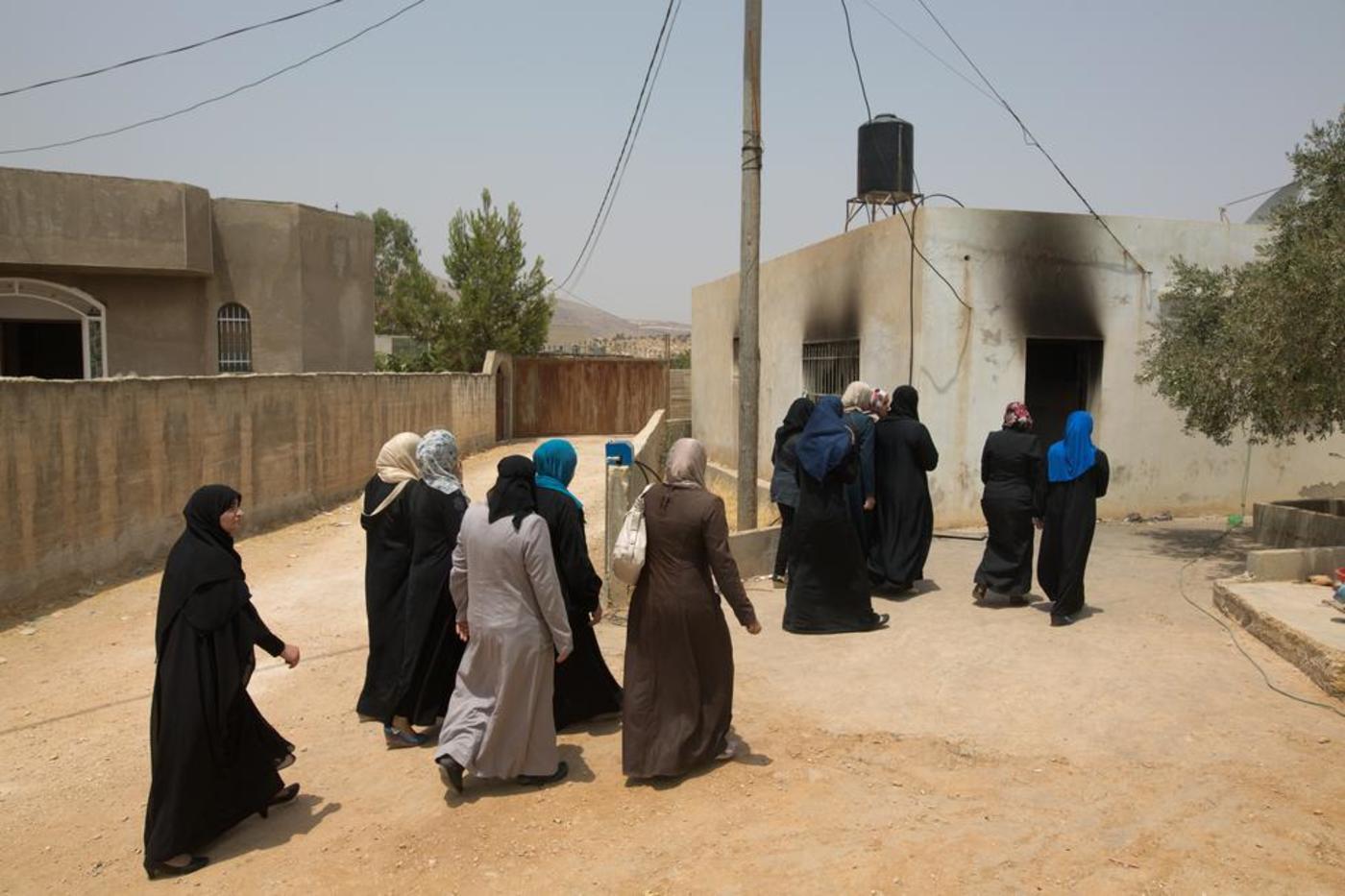 The murder of 18-month-old Ali Dawabsha from the village of Duma in the West Bank last week was truly a shocking event. Two masked arsonists, with all probability Jewish settlers, set fire to his family home while they were sleeping early last Friday. According to eyewitnesses the attackers did not run away but stayed on in order to prevent Ali's parents from escaping from the flames. Ali was burnt to death, his parents and four years old brother were badly hurt and are still in critical condition in Israeli hospitals.

This barbaric act raised, of course, huge anger among the Palestinian public in the West Bank and elsewhere as it was seen as another gruesome manifestation of settlers' violence which goes on, unchecked and unpunished. Or perhaps even more so because the attack was a painful reminder of the burning alive of the young Muhammed Abu Khdeir from the Palestinian neighborhood of Shu'afat in Jerusalem by Jewish Israelis just a year ago. Ali Dawabsha became yet another symbol of Palestinian suffering under Israeli occupation.

Yet this time around, the murder of this Palestinian baby has sent shockwaves into Jewish Israeli society in a magnitude not seen in many years, maybe since the murder of Prime Minister Yitzhak Rabin in November 1995. Nehemia Strassler, usually a moderate liberal Israeli columnist, used Biblical wording this week in Haaretz while describing the "war of Gog and Magog and the end of the Third Temple" into which right-wing extremists, with the consent of Prime Minister Benjamin Netanyahu's government, are leading Israel.

The murder of Ali Dawabsha, cruel in itself, was not the only reason feelings of despair, mixed with fear and rage, have spread among wide sections of the Israeli liberal left and even centre. The arson attack came hours after the stabbing by an ultra-orthodox Jew of six Israeli Jewish teenagers during a Gay Parade in Jerusalem. One of the wounded teenagers, 16-year-old Shira Banki, later died of her wounds.

A word of explanation is needed here. Practising Jews differ very much among themselves, but in Israel there are two main groups. Ultra-orthodox (Haredim in Hebrew) are very conservative in their interpretation of Judaism, but they don't accept the state of Israel as a religious phenomena and therefore oppose it.

Although the differences between ultra-orthodox and national religious Jews are wide, many secular Jews do not see them. The fact that last week violence came from practising Jews - one by an ultra-orthodox Jew driven by hate towards gays, the second by (probably) National Religious Jews driven by hatred towards Arabs – was perceived by many secular Jews as a proof that something has gone wrong in the current Jewish religious thinking in Israel.

They were joined even by commentators from within the settler community. In a clear paraphrase to the common accusation according to which "not all Muslims are terrorists but most terrorists are Muslims," Dr Ran Baratz, himself a settler, wrote in the right-wing Mida site that "while most practising Jews do not commit hate crimes, we have to admit that among hate-crime perpetrators there is worryingly high proportion of practicing Jews".

The list of attacks perpetuated by practising Jews – be they ultra-orthodox or national religious - is terribly long. We can briefly mention the Jewish Underground, an euphemism for a settler terror group responsible for killing and wounding dozens of Palestinians leaders and students in the beginning the 1980s. Then there was the massacre of 29 Muslims worshipers in the Ibrahimiya mosque (Tomb of the Patriarchs) in Hebron in 1994 by a Jewish settler doctor. Now we have the Price Tag (Tag Me'hir) activists, another euphemism given this time to dozens of arson attacks on mosques, churches and private Palestinian homes, like the one on the Dawabsha family.

These attacks were not directed only against Palestinians. In 1982, an orthodox Jew threw a grenade into a demonstration against the war in Lebanon killing one demonstrator. And in November 1995, Yigal Amir, a national religious Jew active in the settler movement, murdered Prime Minister Rabin in an attempt to stop the peace process with the PLO which started in Oslo.

This murder led to an unprecedented split in Jewish Israeli society. It was common then to talk about Israel divided into two peoples: the secular, left-leaning and "peace camp" types in Tel Aviv, and those of Jerusalem - orthodox, right wing, and opposed to any compromise with the Palestinians. These were, of course, gross generalisations, but they had a grain of truth in them.

The falling apart of the peace process after the failure of the Camp David summit in May 2000 and the beginning of the Second Intifada five months later helped to bridge the gaps between these two distinct sections of Israeli society. The wounds did not heal, and they have reappeared now and then, especially at election times, but the core of the debate – the peace process with the Palestinians – changed dramatically.

Faced with rising violence on the one hand and a conviction that there is no Palestinian partner on the other, the whole Palestinian issue went through a process of depoliticisation in the eyes of the majority of the Jewish Israeli public. The fact is that the two last election campaigns focused on social and economic issues while a term like "peace" was almost completely absent. It was as if Jewish Israeli society believed it could go on with its affairs without dealing with the occupation.

The sequence of last week's events shattered these illusions. It began at Wednesday in Beit-El, one of the oldest and most influential settlements, situated at the outskirts of Ramallah. Angry crowds, supported by the settlement's mayor and even cabinet member such as Education Minister Naftali Bennet, threw stones and confronted police trying to secure the demolition of a building constructed without permits on private Palestinian land. For many in the liberal left, it was perceived as an act of open defiance against the rule of law.

The next day's attack on the Gay Parade in Jerusalem had nothing to do with the Israeli-Palestinian conflict. The attacker belongs to the ultra-orthodox community, which generally oppose the settlement movement and even sees it as blasphemy, and it does seem he acted alone, without support from the community leaders and rabbis.

And yet the stabbing was another threatening manifestation of growing intolerance in Israeli society, even more so as in recent years Israel has gone to great efforts in portraying itself as gay-friendly, in alleged contrast to Muslim countries in the region. This "gay-friendliness" helped to fortify Israel's image as "a villa in the jungle". The killing of the 16-year-old in the parade made Israel look more like a jungle than a villa.

The burning of Ali Dawabsha came a few hours after the stabbing in Jerusalem. Radical left commentators in Israel claimed that the moral indignation from the murder of Ali Dawabshe is tainted with hypocrisy. In the war last summer in Gaza, more than 500 Palestinian children were killed by Israeli army attacks, they claimed, but very few words of condemnation were heard from Jewish Israeli society. Now two settlers killed one Palestinian baby, and everyone rushed to condemn the act.

There is maybe some truth in this claim, but the fact is that this murder was a turning point.

Moral indignation swept not only the "usual suspects" from the left, but even touched centrist figure like ex-finance minister Yair Lapid as well as leaders within the settler community itself, including a public prayer by settlers in Gush Etzion for the sake of those wounded in the arson in Duma.

It is hard to pinpoint what exactly caused this emotional wave among the Jewish public in Israel, which has been largely indifferent to Palestinian suffering. But it is quite clear the brutality of the arson attack on the Dawabsha family put a mirror in front of many Israelis who preferred not to see what the Israeli occupaton in the West Bank looks like and, worse, what dangers its continuation might pose for the very fabric of Israeli democracy.

The moderate left, sometimes referred to as the Zionist left, is outraged. It feels under attack, its values in danger of extinction, similar to what happened after Rabin's murder. Yet this time around, its chances to influence the Israeli society are slimmer. In 1992, the Labour party and left-wing Meretz had 56 seats in parliament. Now they have 29 seats. And what's more important: the peace process, which was the great force behind the moderate left in Rabin's times, is all but dead. The "peace camp" does not have a peace to offer.

The paradox is that the right-wing camp also finds itself in disarray. It has nothing to offer to replace the dying peace process. After the bloody events in Duma and Jerusalem, continuation of the status-quo does not seem like a very promising option, but neither are the parties in government ready for more brave acts like full annexation of the West Bank with its 2.5 million Palestinian residents.

More than anything else, it seems that the arsonists in Duma aimed at creating chaos. This, of course, runs against the interests of the Israeli government and it is therefore understandable why warrants for adminisrative detention, meaning detention without trial, were issued for two violent right-wing activists, the first time it has been used against Jews for many years.

The murders in Jerusalem and Duma are not expected to influence Israel's policy in the short term. But they have made too many Israelis feel that the ground is moving under their feet and this may have significant consequence further down the road.

Photo: Palestinian women visit the Dawabsha family's home in the West Bank village of Duma on August 4, 2015, after it was set on fire by suspected Jewish extremists on 31 July, killing 18-month-old Ali Saad Dawabsha and critically injuring his parents and four-year-old brother. (AFP) Inside Israel
Backlash against Israeli officials who denounced hate crimes