The brakes come off: UK Parliament's vote on Palestinian statehood

David Hearst
As Monday's landmark vote in the UK Parliament illustrates, Israel is incrementally losing impunity for its actions 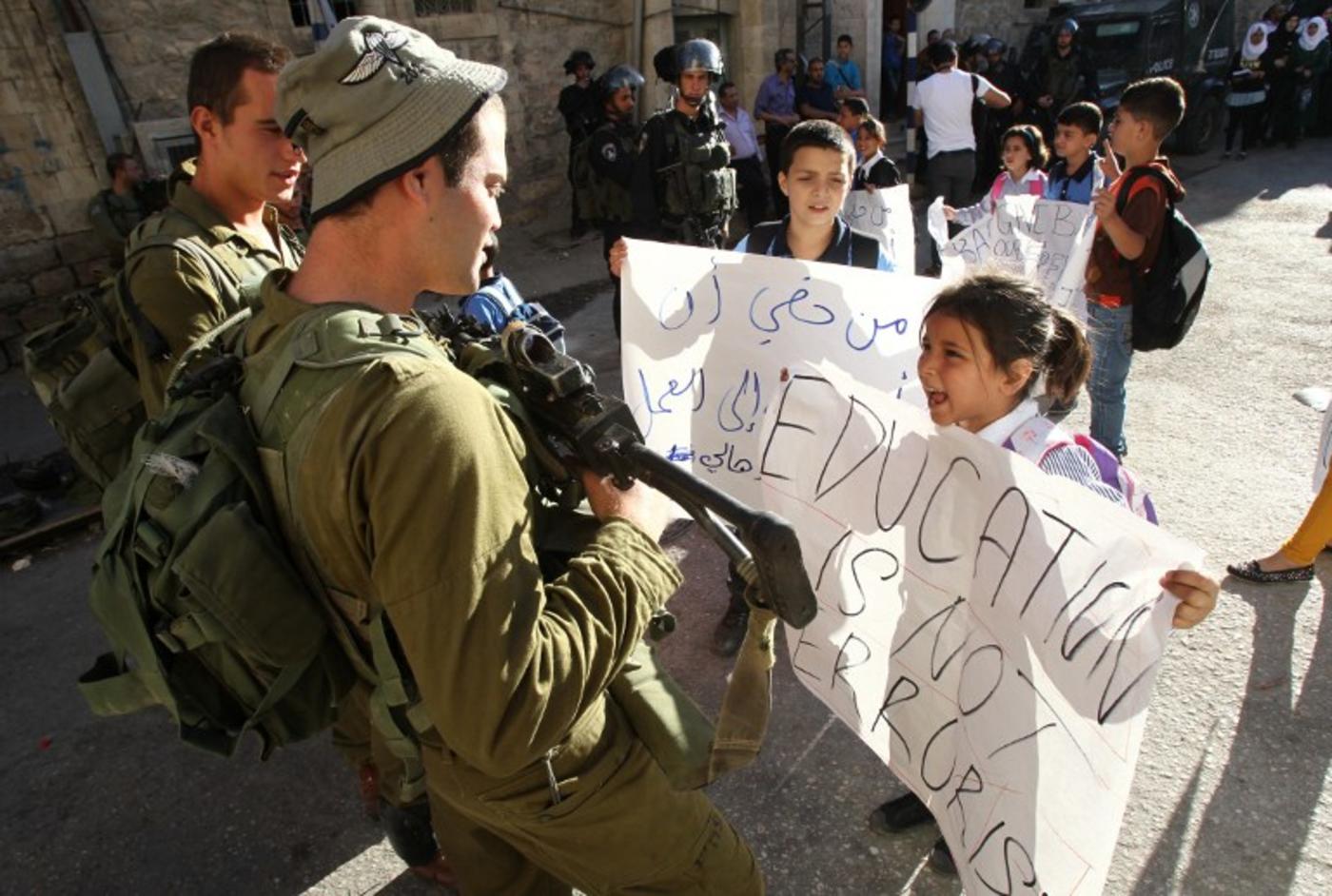 At some point in the process that led to the end of the conflict in Northern Ireland, there was a audible snap, a break in the link between the mother ship, the British government, and Protestant Unionism which considers itself the last outpost of the British Crown on the island of Ireland. Was it the Anglo-Irish Agreement between Britain and Ireland, which that arch unionist Margaret Thatcher signed? Or was it the landing of the first helicopter from the Irish Republic at Hillsborough Castle, the residence of the British secretary of state?

For Israel, an umbilical cord carrying the lifeblood of the state extends between it and Washington. Just imagine the speeches in the British Parliament which voted to recognise Palestinian statehood on Monday, being uttered on Capitol Hill. They would have been unrepeatable in the US Congress.

Nevertheless, there was an audible snap in Britain on Monday night. Freed of the burden of saying what Israel and its lobby demanded to hear, politicians of right and left said what they felt.

Sir Richard Ottaway, the Tory chair of the Foreign Affairs Committee, one who, in his own words had stood by Israel through thick and thin said that such was his anger at the Israeli government's annexation of 950 acres of the West Bank, that he would abstain.

Sir Alan Duncan, the former Tory minister for international development compared the settlements in the West Bank to the apartheid system of South Africa and said they represented a "wicked cocktail" of occupation. In a speech to the Royal United Services Institute, the chief think tank of the British defence establishment, on Tuesday Duncan said:

"Anyone who supports illegal Israeli settlements in Palestinian land is an extremist who puts themselves outside the boundaries of democratic standards. They are not fit to stand for election or sit in a democratic parliament."

That judgement applies to most of the Israeli cabinet and certainly its prime minister Benyamin Netanyahu, who said on 11 July:

"There cannot be a situation, under any agreement, in which we relinquish security control of the territory west of the River Jordan."

Netanyahu went on to say that if Israel relinquished Judea and Samaria, the biblical vocabulary every Israeli politician uses for what Duncan described as stolen land, they would create another "20 Gazas".

Netanyahu has created major problems for anyone trying to sell the line that a vote for Palestinian statehood was a vote against attempts to restart negotiations with Mahmoud Abbas, the Palestinian President, because unilateral recognition prejudiced the outcome.

Simply, that line has few takers according to the vote that was carried overwhelmingly. Whatever Israel claims are its intentions, its facts on the ground now speak louder than words. 600,000 settlers in the West Bank and East Jerusalem, with their network of separate motorways, roads, walls, electricity and water says all anyone wants to know about Israel's intention of handing back the West Bank. It will not. It can not. No Israeli leader is strong enough to do it.

Israel's fury at the vote was uncontained, issuing a statement condemning the vote. But the silence of its UK ambassador Daniel Taub on Monday was complete. According to Haaretz, he refused to give interviews. He should reflect on the fact that if he is losing the support of establishment figures like Ottaway, he is losing the game. As Ottaway himself said: "I have to say to the Government of Israel that if they are losing people like me, they will be losing a lot of people."

Duncan delivered probably the bluntest public message from an ex minister about the tactics Israel has employed in trying to fashion and control what the British political elite thinks and says publicly about the conflict. If it was wrong to correlate Israel with all Jews, it was equally wrong to conflate all Jews with Israel, Duncan argued.
"But our politics has rules. And one important such rule is that our political funding should not come from another country or from citizens of another country, or be unduly in hock to another country. This rule seems to apply to every country except when it comes from Israel. Jewish voters in the UK should be welcomed as supporters of, and donors to, their favoured political party. Of course, the support of any British Jew for any political party can hinge on whatever they want, including on a politician's stance on Israel. But we should stop conflating, as we have for too long, British Jews with the Israeli lobby. They are distinct, and failing to recognise this treats the entire Jewish community as if they are homogenous, when of course they are not.We need British Jews for the Conservative, Labour, or other UK parties; not the Israeli lobby for any party.The time has come to make sure above any doubt that the funding of any party in the UK is clearly decoupled from the influence of the Israeli state."
This is sort of language has rarely if ever been heard before from a recently departed former Tory minister.
The parliamentary vote was the voice of the British establishment. It did not reflect the will of the British government, but as the former Foreign Secretary Jack Straw said, it did reflect the will of the British people. That is difficult to test, but here are some measures: 50,000 emails sent to MPs in the last three weeks expressing anger at Israel during the latest Gaza war; 110,000 signatures on the petition supporting the motion; the biggest ever demonstrations in London over Gaza.

In contrast, the Palestinian voice is becoming more prominent, as is the Labour Party's search of the British Muslim vote. The loss of Baroness Warsi, the foreign office minister who resigned over the government's inaction over Gaza, was felt by David Cameron, for the same reasons of centrist politics,  because she was important to the conservative vote among British muslims.

Will anything change? Little in the immediate future, but the international community is moving on. Incrementally, Israel is losing impunity for its actions. The logic of Duncan's speech is that goods produced in the occupied territories should be boycotted. But how then do you separate those from goods produced in Israel within its 1967 borders? An academic boycott of Israeli institutions of higher education in the West Bank should, according to the same logic, be considered. There is a university now in Ariel, once a settlement , now a city, where house prices are booming.

Once you pull one thread out of the weave of policies supporting the status quo and the occupation, the whole cloth unravels. Make no mistake, this vote was a landmark moment. For this century and most of the last, Zionists have done everything they can to make Palestine disappear, and the Palestinians invisible - from the founding myth that the land they were settling was "empty", to the refugees, to the internally displaced, to every policy limiting the movement of Palestinians, and dictating where they can or can not live today.

After this vote, and others like it, Palestine and Palestinians are somewhat more visible. They have statehood and they have rights as citizens under occupation, rights that are enforceable in British courts as they are in international courts. For how much longer will a British government continue to apply its American dictated veto on moves to apply real pressure on Israel? When will the brakes come off?

Photo Credit: Palestinian children demonstrate near an Israeli check point in Hebron this August after they couldn't pass the checkpoint to get to school as it was closed off by Israeli security forces (AFP) 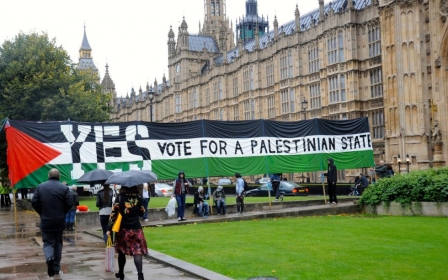 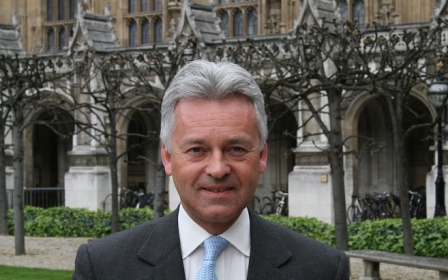