David Cronin
Milos Zeman, who hopes to be reelected in the second round of voting, has a long history of making inflammatory comments on the Middle East 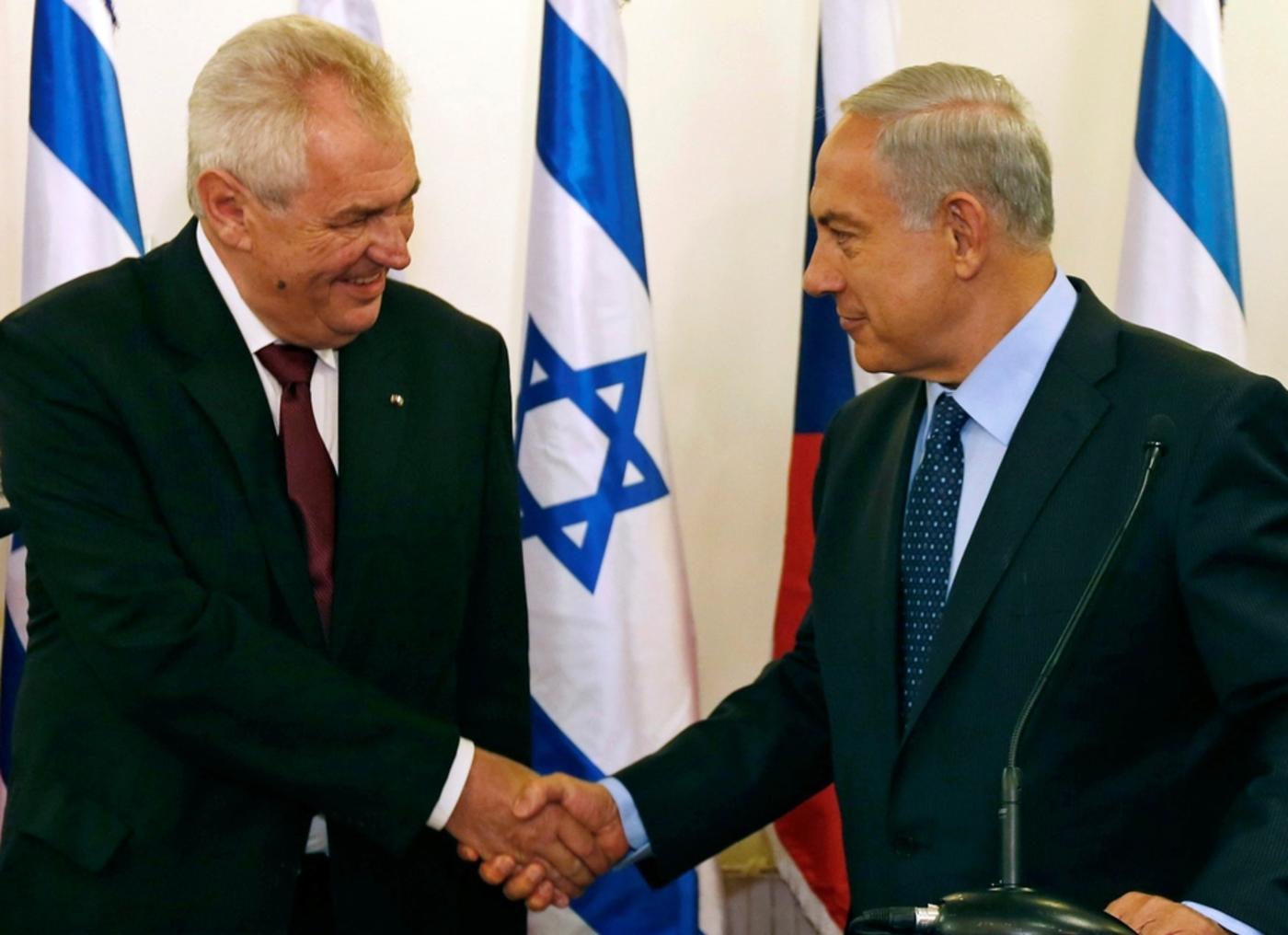 Back in 2013, Milos Zeman, the Czech president, advocated that his country's embassy in Israel should be moved from Tel Aviv to Jerusalem. That was more than four years before Donald Trump announced that the US would take such a reckless step.

Zeman, who is hoping to be re-elected in the next few days, is a bundle of contradictions. His reported hobby is hugging trees, yet he has refused to accept the scientific consensus that climate change is caused by burning fossil fuels. He identifies himself as a social democrat yet makes common cause with the far right.

Zeman, who has been in office since 2013, has won the first round of voting. However, he will face a formidable challenge from the pro-EU runner-up, Jiri Drahos, in the second round of voting on Friday.

Despite those contradictions, Zeman arguably bears a stronger resemblance to Trump than any other top-level politician within the European Union.

Both men have promoted bigotry against Muslims. Based on his rhetoric, Zeman may be even worse than Trump. The Czech president has called Islam a "religion of death".

Zeman advocates the mass deportation of refugees, contending that they include "jihadis, who may be active in so-called sleeper cells, preparing terrorist actions".

Without evidence, he has alleged that "Islamic migration means women are denied access to education".

Not only does that comment display ignorance of the massive contribution made by Muslim women and girls to Europe's schools and universities, it creates the false impression that Zeman is progressive. The sordid irony is that Zeman has been reactionary on social issues.

By pushing for 'unconditional solidarity' with Israel, Zeman has carved out a niche as a hardcore defender of Zionism

He has, for example, blocked an academic's promotion because the man in question was a campaigner for gay rights.

His recommendation made him sound like a less polished version of his fellow social democrat Tony Blair. Zeman has a long history of making inflammatory comments on the Middle East.

Then the Czech prime minister, he caused outrage in 2002 by likening Yasser Arafat to Adolf Hitler. Although he subsequently claimed that he had been misquoted, recordings by the Israeli media indicate he did indeed seek to draw such an absurd parallel.

Zeman's penchant for absurdity has endeared him to the pro-Israel lobby. Visiting New York last September, he declared: "We need unconditional solidarity for Jewish people and the state of Israel."

That short sentence is sinister on a number of levels. The "Jewish people" and the "state of Israel" are not synonymous and never have been. Jews in Europe and North America cannot be held collectively responsible for Israel's actions.

'Unconditional solidarity' for Israel would require backing whatever that state does. The torture of child detainees, the bombing of schools and the takeover of Palestinian homes all have to be applauded, according to Zeman's logic

The inference made by Zeman that Jews reflexively cheer on Israel is the kind of ill-informed commentary which helps promote anti-Semitism.

"Unconditional solidarity" for Israel, meanwhile, would require backing whatever that state does. The torture of child detainees, the bombing of schools, the confiscation of EU-funded solar panels and the takeover of Palestinian homes in East Jerusalem all have to be applauded, according to Zeman's logic.

It would be comforting if Zeman was something of an aberration. Yet the truth is that his views echo those aired in Czechoslovakia for more than a century - as I learned during a recent trip to Prague. In 1913, a Czech Zionist newspaper Zidovské listy claimed that Arabs belonged to a "world of modest huts and camels" and were "incapable of understanding the cultural world of advanced technologies".

Almost exactly 100 years later, Zeman described Israel as "a green island in the Middle East". He was trying to copy those Zionists who wax lyrical about the afforestation projects they have funded - often on the ruins of villages from which Palestinians were expelled in 1948 (though that tends to be expunged from the Israeli narrative).

Rifles supplied by Czechoslovakia were of considerable importance to the Zionist militia who dispossessed the Palestinians. The Czech contribution to ethnic cleansing is now celebrated by Benjamin Netanyahu.

The Czech authorities have gone from arming Zionist troops to becoming a client of Israel's weapons industry. Among other things, the Czech Republic has bought radars tested in the Iron Dome system that was used during Israel's 2014 bombardment of Gaza.

Nobody should be deceived by Israeli attempts to brand that missile interceptor as defensive. The commercial viability of the Iron Dome depends on its deployment during inherently aggressive operations, in which Palestinians are massacred.

It is unlikely to be a coincidence that two of the firms behind that system have been pushing for greater trade with the Czech Republic. Both are represented on the Israel-Czech Chamber of Commerce and Industry.

While Zeman is exceptionally frank, the "unconditional solidarity" he recommends is not vastly different to the mainstream Czech position. As president, Zeman wields much clout, though he is not the main shaper of the country's foreign policy.

Trump's decision on Jerusalm: What difference does it make?
Azzam Tamimi
Read More »

Since joining the EU in 2004, the Czech Republic has positioned itself as one of Israel's most steadfast allies within that bloc. The Czech Republic was one of 35 countries to abstain during the recent UN vote denouncing Trump's announcement on Jerusalem. Breaking ranks with most other EU states, the Prague government has stated that it recognises Jerusalem to be "in practice the capital of Israel".

It would be satisfying to see Zeman given the boot by Czech voters. But it would be naive to regard his defeat - if it occurs - as a major setback for Israel. Zeman's opponent in the second and final round of the presidential election, Jiri Drahos, has previously supported cooperation with Israel through his work as a scientist.

By pushing for "unconditional solidarity" with Israel, Zeman has carved out a niche as a hardcore defender of Zionism. His fantasy is, unfortunately, not too far removed from present reality.

The solidarity offered by the Czech Republic is already veering towards the unconditional.