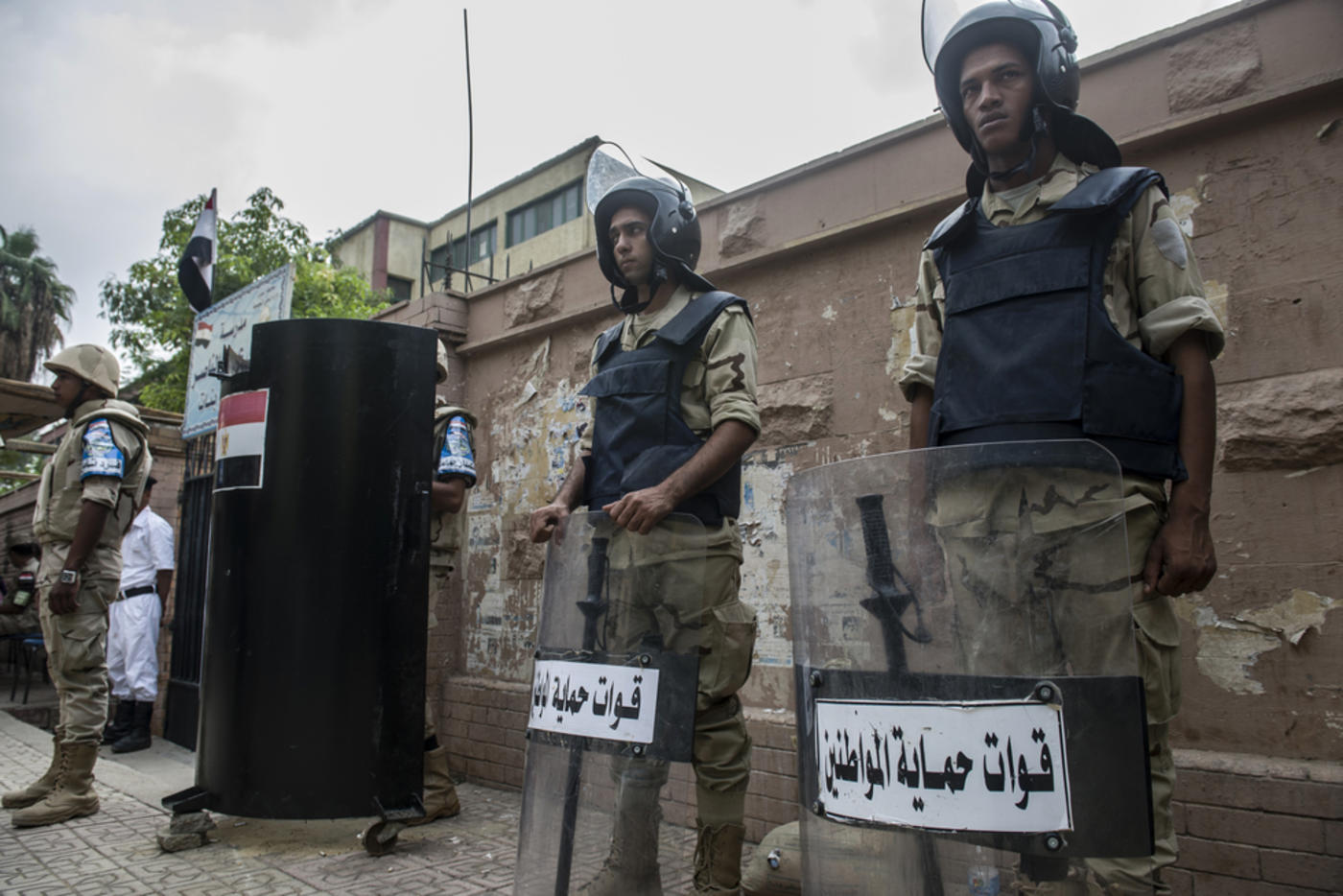 As Britain prepares to welcome Egypt’s President Abdel Fattah el-Sisi next week, it is important to put the facts on the table. Egypt’s top military man who took off his uniform to become president hides a bloody record of human rights abuses behind a timid smile, and a rhetoric that Western governments want to hear: I am the one to fight terrorism.

But the truth is largely distorted. The normalisation of Sisi’s rule comes under a myth that the military grip in Egypt brings security and stability.

The myth of security

One of the most appealing messages propagated by the Egyptian regime is that which links the rule of the military to safety and security amidst regional violence and chaos. But millions of Egyptians are deprived of safety and security by a state that is gradually but steadily giving them less, if anything, in return and taking the lives of thousands without remorse.

Since the military forces in Egypt ousted former president Mohamed Morsi, over 200 students have been killed, 22 of them on campus.

As for women, a study by the International Federation for Human Rights (FIDH) reveals that there has been a surge in sexual violence systematically carried out by security forces ever since the military takeover in 2013 in order to “eliminate public protest”. According to the same report, women have been subjected to sexual assault, rape with objects, electrocution, and “virginity tests”.

The report, “Exposing state hypocrisy: sexual violence by security forces in Egypt,” shows that some women were abused by the security services in order to make husbands, fathers or brothers confess to a crime. “A policy of humiliation” saw women sexually assaulted at checkpoints, university entrances and in prisons.

So, in short, as a former employee at Egypt’s El Eqabiya detention centre said: “Anyone who hasn’t been raped is the exception.”

On the other hand, since the overthrow of Morsi in July 2013, most of Egypt’s Islamist groups have turned against the state in what seems to be the deadliest insurgency in the country’s modern history. A study by Carnegie Endowment for International Peace shows that after the military takeover in 2013, an average of one Egyptian soldier has died per day.

Jihadi insurgency groups and terrorist attacks in Egypt aren’t new to Egypt. Between 1986 and 1999, Egypt witnessed around 470 terrorist attacks. During that time, over 1,300 Egyptians lost their lives as a result of terrorist activities.

However, the same study by Carnegie reveals that in August 2013 alone, the Egyptian security forces killed nearly as many pro-Morsi protestors as all Egyptians killed during the 13 years of terrorist insurgencies from 1986 to 1999.

The militarisation of Egyptian politics and the securitisation of the public sphere legitimised trans-national jihadist narratives and catalysed a wave of jihadi recruits in Egypt that feeds viciously on the military crackdown. The cycle of violence perpetuated in this context is desperately overshadowed by state-sponsored propaganda and a myth of security.

The myth of stability

In total, Human Rights Watch estimates that more than 41,000 people have been detained since July 2013, thousands of whom are yet to be tried. Out of those who were convicted, 670 were sentenced to death. Hundreds more have disappeared with little if any news on their whereabouts.

In a letter to US Secretary of State John Kerry ahead of US-Egypt dialogue last July, Sara Margon, Washington director of Human Rights Watch wrote:

“We strongly believe Egypt’s current repressive approach, which it claims is intended to address security threats, is deeply counterproductive and that stability will remain elusive unless there is significant political reform that adheres to the principles of basic rights.”

A major part of the stability myth is that of the economy. The $8 billion Suez Canal expansion has proved to be a farce. The decline in non-oil exports and tourism revenues led to loss of over $3.6 billion in three months.

The Egyptian pound is struggling despite the regulatory system in place. Governor Hisham Ramez was replaced by Tarek Amer last week to appease businessmen, bankers and the IMF, who are pushing for a 30 percent currency devaluation. Egypt’s Central Bank controls the value of the local currency through a system of foreign currency auctions. Investors will welcome the devaluation as it reduces the cost of foreign investment, while causing an inflation that will hit hard millions of lower and middle-class families.

On top of that, Egypt’s minister of social solidarity announced two weeks ago that the government won’t be able to distribute $6.8 million worth of pensions due to the currency crisis.

The future belongs to a generation in prison

The millions of Egyptians struggling to make a living are reminded constantly through the sound of explosions and suicide attacks that everything is not fine. In fact, this is the sound of war that intensified with the military crackdown on Islamist forces and the overthrow of former president Morsi. The rule of the military on the one hand and insurgent groups on the other, feed on the terrorism of each other. One cannot find legitimacy without the other.

Egypt’s state-sponsored propaganda is fragile. The first round of the parliamentary elections that kick-started last week showed that Sisi is walking a tightrope despite all the backing and welcoming he gets regionally and internationally.

More people queued for what is left of subsidised bread than for voting. Even more people showed solidarity with prominent blogger and activist Alaa Abdel Fattah who has been detained for over a year, with the hashtag #FreeAlaa becoming a Twitter worldwide trend.

If Downing Street thinks that those virtual and symbolic trends, those facts and numbers, the 17,000 workers on strike in Egypt’s largest public textile factory, the popular solidarity with Alaa, do not say anything about the future of Egypt, then it seems the lessons of the popular uprisings haven’t been learned.

Image: Egyptians soldiers stand guard outside a polling station in the Dokki neighbourhood in Cairo's Giza district, on the second day voting in Egypt's parliamentary elections on October 19, 2015. (AFP)